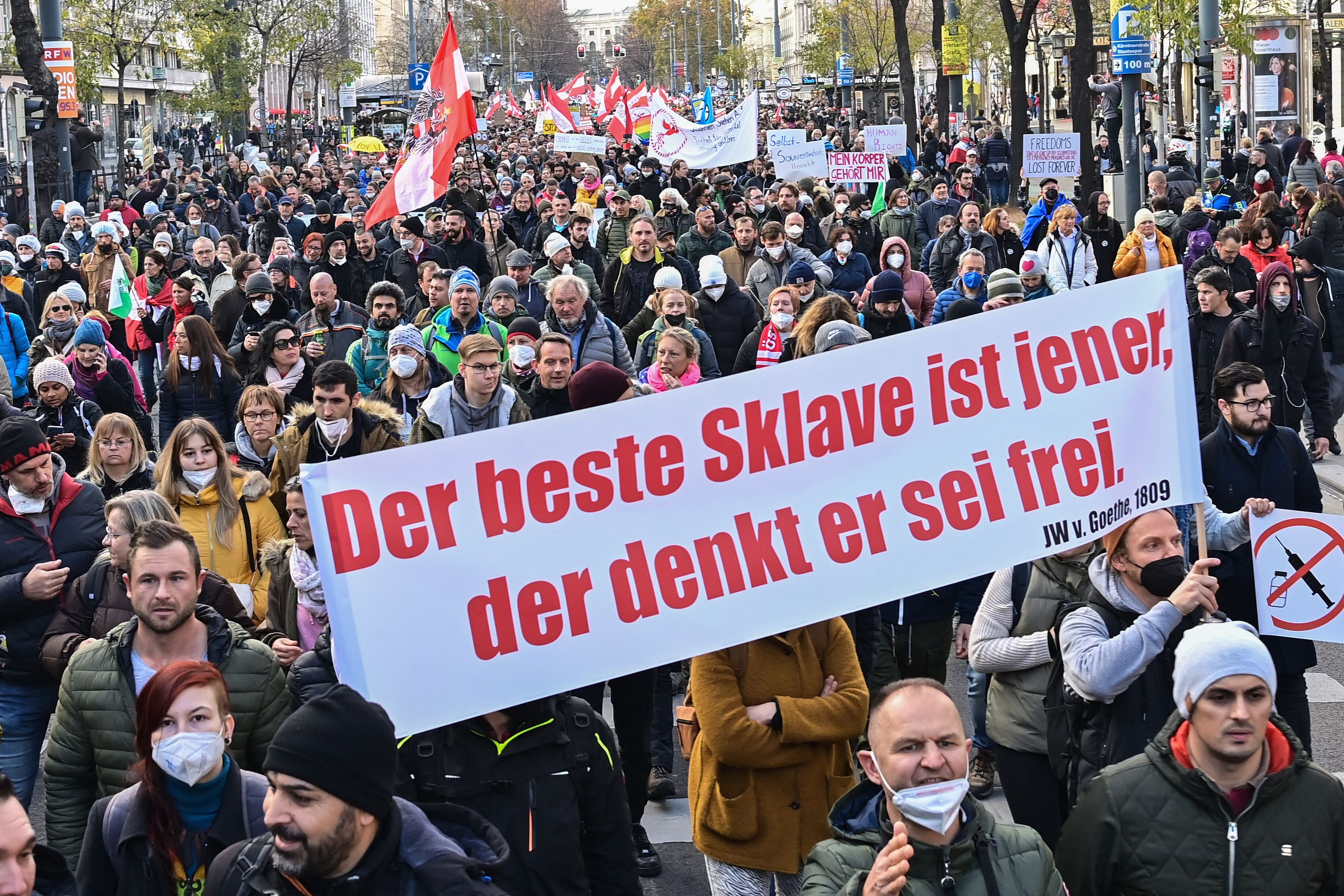 Thousands of people have taken to the streets this Saturday in Vienna (Austria) and Rotterdam (Netherlands) to protest against the measures in the face of the wave of covid that crosses Europe. In the Austrian capital they have demonstrated for the confinement decreed by the Government as of Monday before the impact of the fourth wave and the announcement that a law is being prepared that will make vaccination against covid-19 mandatory next February. In the Dutch city, the protest has turned into an outbreak of unusual violence. At least seven people have been injured – between police officers, protesters and a journalist who was covering the events and was attacked by the latter – and there have been fifty arrests.

Several demonstrations run through sections of the historic center of the Austrian capital to later focus on different points, a way to mark a presence and at the same time block the heart of the city. A large police deployment monitors the protests to react to possible incidents and the public address system constantly warns that it is mandatory to wear the FPP2 mask, which many attendees do not wear until they are warned. After a quiet start encouraged by popular music, the Austrian media reported some incidents and first arrests. Some protesters have thrown beer cans and plastic bottles at police, according to the newspaper The standard.

Anton Egger, a 37-year-old optician, and his girlfriend, Monika Kaltschmid, 29, who works in lighting projects, go to one of the protest points without a mask and warn that they are not vaccinated. “I have refused to follow the government’s rules, they don’t treat us like adults, and the pressure has forced me to quit my job,” says Egger. She also refuses to have to present negative evidence to work in contact with the public. “This smells of Nazism,” the man maintains.

See also  At the epicenter of the Portuguese political crisis

The main call is paid by the far-right party FPÖ, which marks the step of the protest and has encouraged the movement of skeptics with the vaccine and the covid. Its leader, Herbert Kickl, who is in quarantine after testing positive, said on Friday, after announcing a new confinement and mandatory vaccination, that Austria is turning “into a dictatorship.” This was replicated this morning by several speakers who addressed the protesters, shouting “we are the people”, “dictatorship”, “resistance”.

Some of the attendees wear ultra party armbands or are members of the formation, such as Günther Mück, 54, who does not oppose a new confinement to stop infections, but does oppose mandatory vaccination. “It goes against reason, they only do it to sell vaccines, not on a scientific basis,” he says in the Plaza de los Derechos Humanos, one of the points of the protest.

The banners show that the decision announced on Friday by Christian Democrat Foreign Minister Alexander Schallenberg, who governs in coalition with the Greens, also moves the protest. “Obligation to think instead of obligation to vaccinate”; “For freedom, I decide on my body” are some of the slogans on the banners.

The Plaza de los Héroes is home to several thousand people shortly after noon, who react with a loud whistle every time the police loudspeaker warns that you must wear a mask – the organizers offer them – and that the act is recorded in case there are incidents at any time. The Interior Ministry assumes that they will attend the right-wing extremist demonstrations, which is why it has prepared a device of some 13,000 agents, according to the Austrian media.

“I am not from any party, but I am here for my freedom and that of our children”, highlights Bettina K., 54, while waiting for one of the speeches and adds that she does not trust the vaccine because “it is a experiment”. Others have come just to show their rejection of mandatory vaccination, like 29-year-old Barbara K. “I am vaccinated, but this cannot be decided for us. You have to vote on it ”, he demands.

Austria began a lockdown for unvaccinated last Monday to try to stop a wave that has triggered infections above 15,000 a day and dozens of deaths. Given the unstoppable increase, the closure will be extended on Monday for 20 days to the entire population. The vaccination rate, close to 66%, is one of the lowest in Western Europe.

While the nature of the shooting is being investigated, a video circulates on social networks where a man is allegedly shot, and the National Department of Criminal Investigation is analyzing what happened. The rally led to a full-blown riot shortly after several hundred people began throwing objects and large-caliber fireworks and firecrackers at officers. Police cars were set on fire and bicycles, bus stops and traffic signs were smashed. There was also looting of stores. At one point access to the central railway station was closed, and according to the police, there was a combination of factors. When reinforcements from riot control forces arrived, the regular police were surrounded by protesters. “At various points, the officers were forced to shoot. Then, there were people who launched themselves against them and that group were no longer protesters but something else, ”said Mayor Aboutaleb.

See also  Mum of terminally ill girl, 7, with days to live can't afford to put heating on in home

On the other hand, the authorities of Guadeloupe, one of the two main islands of the French Antilles, announced on Friday the establishment of a night curfew, after violent protests against the health pass.

The island’s prefect, Alexandre Rochatte, announced an immediate curfew until November 23 (from 6:00 p.m. to 5:00 a.m. local time) “due to social unrest in the department and acts of vandalism,” according to his office.