Skip to content
Home News Coronavirus: Mexico lags behind in vaccination against covid in Latin America 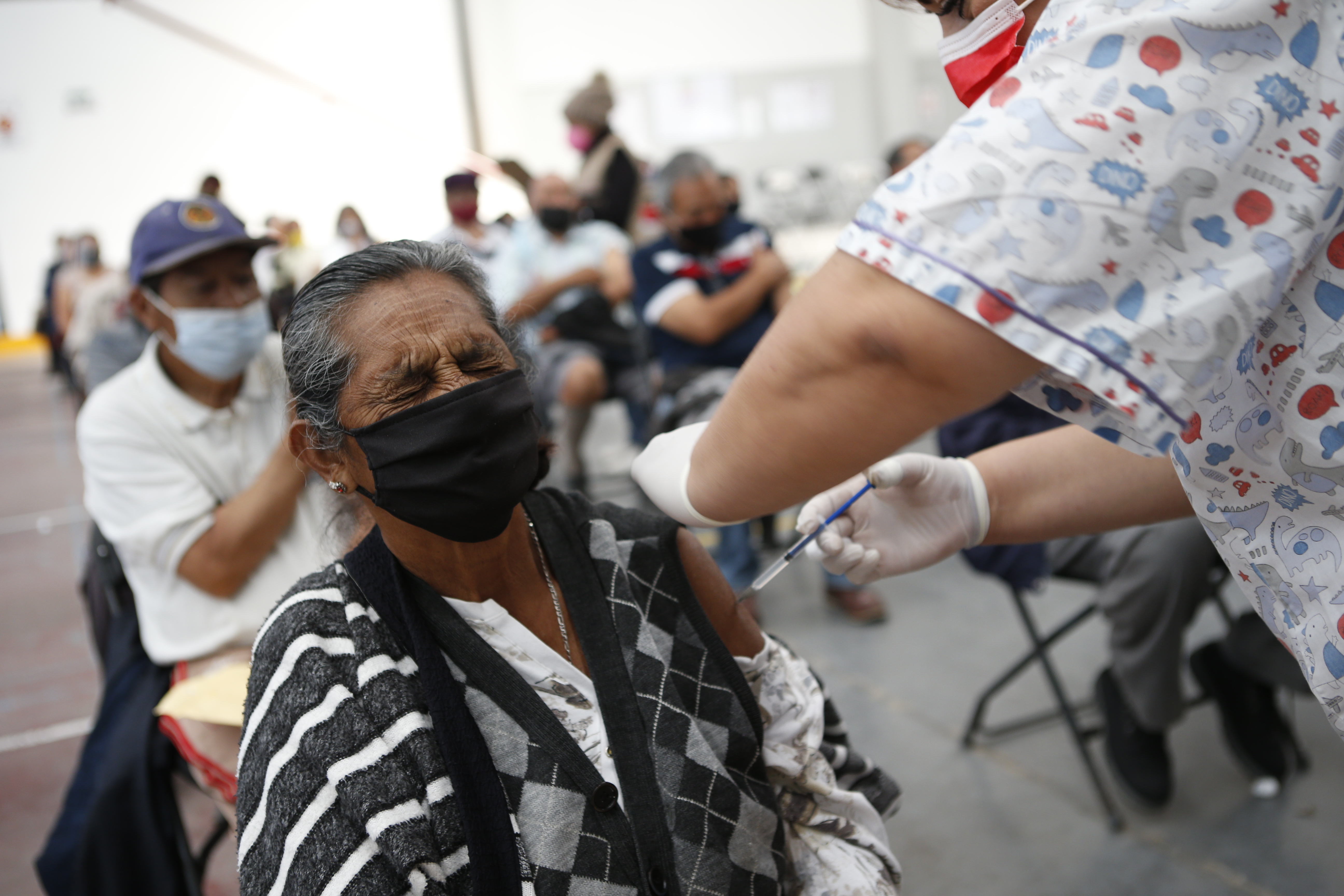 The first Latin American country to receive the covid-19 vaccine is a year later one of the furthest behind in vaccination in the region. Just over half of the Mexican population has its full one or two dose schedule, 56.4% as of December 28 if the total is divided by the World Bank’s estimate of 128.9 million inhabitants. Between the optimism of the authorities and the questions of the specialists, doubts multiply in the face of the expansion of omicron, which is heading to become the dominant variant of the virus in Latin America in the coming weeks and has already left its mark in Europe and U.S.

The data show that only six out of every 10 inhabitants of Mexico have started the vaccination process. This figure contrasts sharply with that of comparable countries in the region: in Brazil or Colombia it is close to 75%, for example. In others, certainly smaller in population terms such as Argentina or with a higher income level such as Chile, this percentage is above 80%. Vaccination has been consolidated as a reflection of the inequality that prevails in America: at the end of the continental list are countries such as Honduras, Guatemala and Bolivia that have protected less than half of their population against the coronavirus or the extreme of Haiti, with a percentage that is barely around 1%.

The peak of infections by omicron, a version of the virus much more contagious than the previous ones, has put several Latin American countries on alert that have already applied booster doses to their inhabitants. Chile sets the pace in the region with more than 53% of its population with three and up to four doses applied, followed by Uruguay, which has 43% of its population protected with booster vaccines.

The countries of reference in vaccination in the region took longer to start their campaigns than Mexico, which put its first dose on Christmas Eve 2020, but little by little they surpassed it. This is seen when comparing changes in doses administered per capita. The Chileans did it early thanks to their availability from the Chinese pharmaceutical company Sinovac; The Uruguayans would follow, with vials of the same origin; then Cuba would come, the only country in the region that has its own vaccines.

See also  What body language can tell you about your partner

For Jaime Sepúlveda Amor, executive director of the Institute of Global Health Sciences at the University of California in San Francisco, the leadership of both South American countries is due to a change in the direction of their initial commitment to Chinese vaccines, which were more easy to get at the beginning of the year, amid global shortages, but they have shown low effectiveness against the new variant. “In Chile and Uruguay they have been adjusting their health policies based on scientific information, including in Brazil,” says Sepúlveda Amor.

“Mexico has been lagging behind, while many countries in Central America, South America and the Caribbean have better vaccination coverage,” adds the specialist. The North American country began the application of booster doses two weeks ago, but restricted to adults over 60 years of age and medical personnel, as of last Monday. It is not yet clear what the strategy will be for the rest of the population in the coming months. Alejandro Sánchez, a researcher at the Institute of Biotechnology of the National Autonomous University of Mexico, points out that the Mexican authorities have not made a decisive decision in the face of a new dilemma: start distributing the booster doses or catch up with the lags that it drags in the most remote areas of its territory, where millions of people live who have not received any protection against the virus. “The omicron variant grabbed us with our fingers at the door,” he says.

“The vaccination rate has been slow and has not accelerated,” says Sánchez. How far behind other Latin American countries is Mexico in applying booster doses is anyone’s guess. The Government of Andrés Manuel López Obrador has not published statistics on the progress that is being made. Andreu Comas, an epidemiologist at the Autonomous University of San Luis Potosí, claims that access to official databases is shielded and that when he asked to enter he was asked to sign a confidentiality agreement. As a result, not only is it not known how many booster doses have been given, nor is it known how much time elapsed between the application of the doses, nor detailed information on which are the areas of the most backward states. “Vaccination in Mexico is extremely opaque,” criticizes Comas. Vaccine procurement and contracts are also shielded by confidentiality agreements and reserved as national security information.

The Mexican system has shown that it can deliver more than nine million doses in a single week, and sustain values ​​of 3.5 to six million repeatedly. A question that remains hanging is why this rhythm has not been maintained more frequently. Marcelo Ebrard, Secretary of Foreign Relations, celebrated that the country will close the year with about 200 million doses. The Ministry of Health, however, reports that only just under 150 million have been applied. “Those doses could be used to apply reinforcements,” says Comas. “We go back four or five months since there was evidence that a third dose would be necessary,” he adds.

The Government, however, maintains that Mexico has sufficient doses to face the next few months. “The vaccination strategy is not understood”, asks Sánchez, “you are not going to vaccinate children under 16 years of age, you do not have enough vaccines for all the reinforcements that are needed and apart from that you say that you are not going to buy more, it is a strategy with enough failures ”.

The discrepancies between the data presented by the López Obrador government and the international counts are notable. The Undersecretary of Health, Hugo López-Gatell, said on Tuesday that 88% of the adult population is already vaccinated, 81.9 million people. In the small print of the graph it is specified that the percentage considers people with at least one dose, whether or not they have a complete vaccination scheme. It is also omitted that the total population is not considered as a denominator and that around 35% of the population, children and adolescents between 5 and 15 years old, are completely out because the authorities do not contemplate vaccinating them, another point that has sparked criticism from epidemiologists.

Even under these parameters, Chiapas, Oaxaca and especially Guerrero have notably lower incidence of vaccination than other entities, measured by the percentage of adults with a first dose: less than three quarters, far from the virtual 100% of the capital, Querétaro or San Luis Potosi. This gap seems indicative of the territorial penetration capacity of the health system, which in turn correlates with the degree of multidimensional poverty. A pattern that has been seen in other countries and has in fact been replicated globally: the poorest regions have come later to immunization.

“[Con ómicron] We could see a large number of cases, but a much lower proportion of hospitalizations than we have had in previous waves, mainly due to the effect of vaccination, ”argued López-Gatell. “We are doing well and hopefully for next year, it will get better and better,” the president endorsed.

“It is not the same to have a dose of vaccine than to be 100% vaccinated,” says Sepúlveda Amor, who accuses the authorities of falsifying the data to project a more positive image of the government response and of greater security than they have. “Statistics are being tortured to force what they want to say, but that is a lie and a lie of great responsibilities,” he adds. The epidemiologist emphasizes that omicron is so contagious that the protection of two doses “will not be enough” and that “it is as if we had the equivalent of one less dose of vaccine.”

Sánchez focuses on the absence of tests and sanitary fences to follow up on imported cases of the new variant. Despite its proximity to the United States and being one of the 10 most visited countries during the pandemic, Mexico reports in its official counts of just over 40 confirmed cases of omicron, although the GISAID platform already identifies more than 250 omicron sequences in the country. In contrast, Paraguay and Brazil account for almost twenty tourists who returned from Cancun with the new version of the virus, despite the fact that no case has been detected in that destination by the authorities.

Specialists agree that it will be in January when ómicron will become the predominant variant in Latin America. Mexico arrives without new specific measures, after the December celebrations and with little certainty about vaccination in the coming weeks and the real impact of the variant in its territory. “We are blind,” summarizes Comas.