Skip to content
Home News Coronavirus: I am over 60 years old: what should I do to request my third dose of the COVID vaccine? | Society 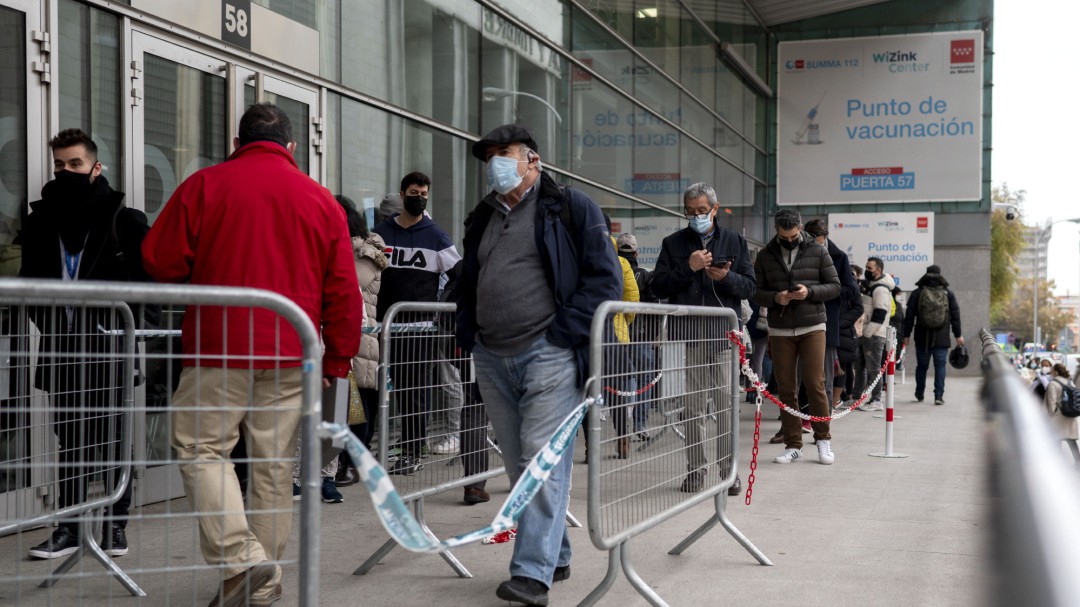 The machinery for mass vaccination is back on track in Spain after Health has recommended the third dose against the coronavirus to those over 60 years of age, health and social health personnel, inmates in centers for people with disabilities and those who received the single dose Janssen. And the race is against the clock. They represent a total of 16 million people that the Government wants to be immunized before Christmas, a time of multiple social interactions. This circumstance is compounded by concern about the new variant detected in South Africa that is leading the EU to take measures to try to stop its expansion.

After the urgent call for Health, the communities are preparing to expand their human and logistical deployment, which, for now, is focused on those over 70 years of age. Currently up to 50% of this group have already received the booster dose. In contrast to the fact that only 14% of those vaccinated with Janssen have been inoculated with the third.

This reinforcement campaign is joined by the pediatric vaccine approved this Thursday by the European Medicines Agency for children between 5 and 11 years old. In Spain there are 3.2 million in that age group. And the forecast is that Pfzier will begin distributing the doses in mid-December. The EMA has recommended that two injections be administered three weeks apart, although with a dose of 10 milligrams, a third of which is given in those over 12.

People who received Pfizer and Moderna will have to wait six months for the third dose. And only three months those who were vaccinated with AstraZeneca and Janssen. From there, the question is how the communities are going to manage this new phase. Will they call for an appointment? Will self-citation work? What places will be enabled? The unknowns are multiple and little by little they are revealed.

The important thing is that Spain has doses of vaccines for everyone, as the Minister of Health, Carolina Darias, has said.

Community of Madrid: first the toilets, then those over 60 years old

Madrid will start next week with health professionals “to do so as quickly as possible” and, “immediately afterwards, those over 60 will be vaccinated,” as explained by the Minister of Health, Enrique Ruiz Escudero.

Andalusia: people over 65 can now make an appointment

In Andalusia the possibility of requesting an appointment is offered to people 65 years of age or older for the third dose.

The appointment request is available through the usual channels and by calling 955 54 50 60 from Salud Responde.

The Extremadura Health Service begins this Friday to inoculate the third dose to health and social health personnel and to the group of 60 to 69 years. In total, almost 184,000 Extremadurans who will be called by their health center.

For next week Castilla y León plans to reopen its mass vaccination centers with the aim of being able to puncture 80% of those over 60 years of age and health and social health at Christmas, calculates its Minister of Health, Verónica Casado.

This community will spend 125,000 euros in the purchase of 2.5 million syringes to give these reinforcements.

Castilla-La Mancha is going to put it “immediately” and at the same time to health and social health personnel and those over 60, since with those over 70 years it is expected to end “at the end of this week or the beginning of the to come “, said the Minister of Health, Jesús Fernández, who also estimates that those immunized with Janssen can have their second dose” throughout this week. ” It can be requested on your page through the self-appointment.

Murcia begins this Friday with the toilets

The Murcian Health Service begins this Friday the administration of the third dose to the health personnel of 061 in the Sports Palace of Murcia. Those in Primary Care will receive it in health centers, they have reported in a statement.

In addition, people from 60 to 69 years old will begin to receive the third dose of the vaccine as of next Monday, November 29.

Galicia plans to finish the administration of the third dose before the end of this year, with which half a million Galicians will have completed their vaccination a total of 500,000 Galicians, said the president of the Xunta, Alberto Núñez Feijóo;

The Valencian Community will start shortly

The president of the Valencian Community, Ximo Puig, has indicated that this campaign of additional booster doses for those over 60 will begin in the Community shortly.

Navarra will start “as soon as possible”

Navarra will kick off “as soon as possible”, according to Minister Santos Induráin.

The age group of 60 to 69 years, to which the booster vaccination is now extended, is made up of 149,652 people in Asturias. This is one of the communities in Spain with the highest vaccination rate.

The Asturian Health Service has unified the service of attention to the citizenship on the coronavirus in the telephone number 984 100 400.

Cantabria is studying a return to vaccination centers

Cantabria has “everything prepared” to accelerate the additional dose that it will initially put in hospitals and health centers, although “it is not ruled out to resort to vaccinations again,” said the vice president and spokesman for the Executive, Pablo Zuloaga. For now, those over 70 are being summoned from health centers for the third dose.

Aragon is pending to inform what steps those over 60 must follow, in any case the reinforcements for those over 70 are being made by requesting an appointment.

The Minister of Health of the Balearic Islands, Patricia Gómez, has reported that the islands are studying whether to rehabilitate larger spaces to “vaccinate everyone as soon as possible”, given that the target groups are expanding

See also  Why has the UK fallen for the cult of Joe Rogan?

For now, the Bitcita platform will open next week for health and social health professionals and they will also start calling those over 60.

In Euskadi, the Minister of Health, Gotzone Sagardui, has maintained that “measures are being enabled” to give the souvenir doses and also to offer another opportunity to those who did not want to vaccinate at the time.

The head of Catalan Public Health, Carmen Cabezas, has said that, in a matter of days, the vaccination of booster doses to the new prioritized groups will begin simultaneously.

For those vaccinated with Janssen, primary care centers have been contacting those affected since November 15 or sending an SMS.

La Rioja, pending of the day

La Rioja has not yet specifically reported the day on which it will begin to inoculate the third dose for the group over 60.

Until now, and also for the booster dose, it has been enough to make an appointment at the health center.

In the Canary Islands, self-citation is generally enabled on the page of the public health system, although if you are over 60 years old there is information that they will contact the interested party.

The community has not yet explained if the self-citation system will be implemented in those over 60 years of age.

89% of the population has already received the complete vaccination schedule and 90% a dose, according to the report published this Thursday by Health. Now focused on the third dose, doubts appear about how it will be received by the population. Experts believe that high doses of coverage will be achieved and recommend that the authorities provide clear and direct information to avoid being fed up.