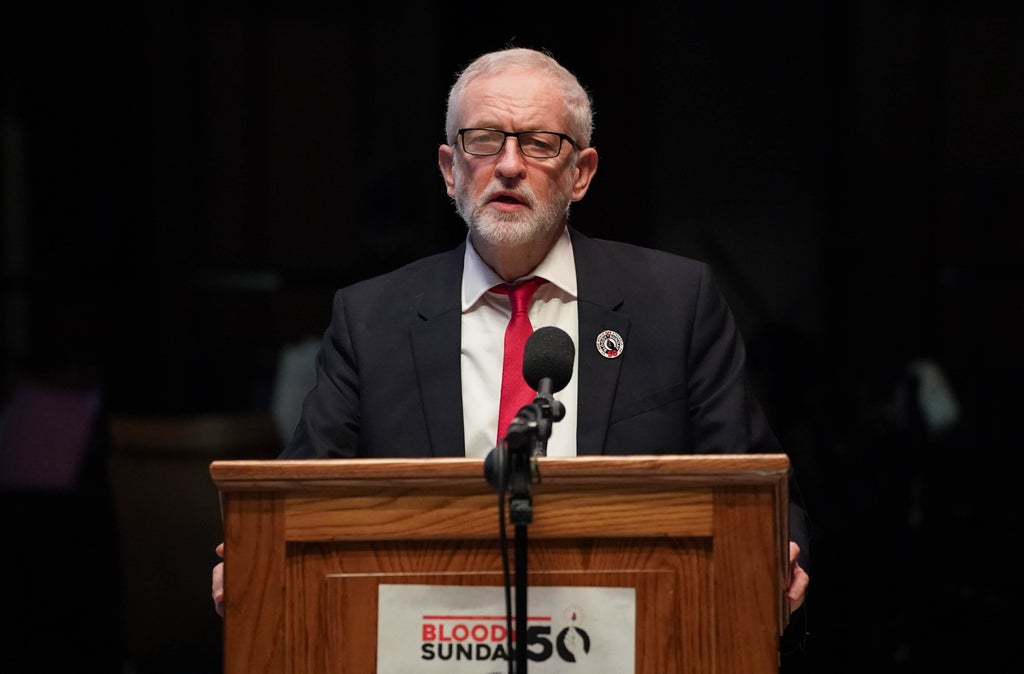 Jeremy Corbyn said it is an “outrage” that no-one has been convicted for the Bloody Sunday murders, and condemned the British Government for its controversial plans to ban prosecutions for Troubles killings.

The former Labor Party leader said there are many people, including some in Westminster, who want to put justice beyond the reach of the Northern Ireland population.

He made the comments as he delivered the 2022 Bloody Sunday Memorial Lecture at Derry’s Guildhall on Saturday.

A series of events are taking place over the weekend in Londonderry to mark the anniversary of the date when 13 civil rights protesters were shot dead by British soldiers on January 30 1972, in the city.

Another man shot by paratroopers on the day died four months later.

“While we are here today to remember lives lost, there are still some, including many in Westminster, who want to put justice out of reach and secure immunity for those who committed crimes in the service of the British State with a deployment in Northern Ireland ,” Mr Corbyn said.

“Those people stand in defiance of our common humanity.

“We must never shrink from holding account apologists for brutality and murder.

“There are still others who rally to the side of the killers, who even fly the flag of the Parachute Regiment on the outskirts of Derry

“It is an outrage that nobody has been prosecuted for the deaths of 14 innocent protesters.

“It is a double outrage that the British Government is now planning legislation to make it even hard for such an effort to succeed at any time in the future.

“That would be the effect of the forthcoming Amnesty Bill, which would stop any prosecution and investigation, judicial review, inquest or civil case connected with killings that occurred before 1998.

“Introducing a statue of limitations for the atrocities that took place in Ireland amounts to nothing short of complicity in covering up the truth and ensures that lessons are not fully learned.”

“This was one of the darkest days of the Troubles. We must learn from the past, reconcile, and build a peaceful future for people in Northern Ireland.”

Mr Corbyn, an MP for Islington North in London gave his lecture at the same location where most of the hearings in the Bloody Sunday Inquiry took place.

The inquiry, chaired by Lord Saville, replaced the verdict of the Widgery Tribunal which had largely cleared the soldiers and British authorities of blame.

Lord Saville’s inquiry found that none of the casualties were posing a threat or doing anything that would justify their shooting.

It said no warning was given to any civilians before the soldiers opened fire and that none of the soldiers fired in response to attacks by petrol bombers or stone throwers.

Lord Saville found there was “some firing by republican paramilitaries”, but that on balance the Army fired first.

Former Prime Minister David Cameron told the House of Commons in 2010 that the killings were “unjustified and unjustifiable”.

Among those attending the event on Saturday was SDLP leader Colum Eastwood and former leader Mark Durkan.

Mr Corbyn added: “Half a century ago, in an era when people around the world were rising up to demand civil rights, protesters came onto the streets of this city.

“Peaceful protesters to march against the most flagrant denials of those rights.

“The protest of January 30, 1972 was against internment without trial. A grotesque example of the discrimination faced by the community at that time.

“But one introduced precisely because of their resistance to second class status when it came to jobs, houses, and representation.

“Those protesters were gunned down on the streets.

Mr Corbyn read out the names of the 14 people killed.

“Their names rings out across the years and their young ages still have the power to shock,” Mr Corbyn added.

He also criticized the verdict of the Widgery Tribunal which had largely cleared the soldiers and British authorities of blame.

He said this compounded the injustice.

“Every single obstacle was put in the way of those seeking justice, trying to find their way to the truth,” Mr Corbyn added.

“The victims were blamed. The media got hold of the story, the army press releases and briefings that went on.

“They were blamed for being victims, as if it was their fault they were there and shot dead by soldiers.

“Records and guns were destroyed. De-notices to prevent the discussion in the media were issued and the dead vilified.

“These insults to the bereaved were allowed to continue for decades.

“Remember it was 50 years ago tomorrow since Bloody Sunday but it’s only been 12 years since that unambiguous exoneration of all of those victims.

“All of those years, there was a question mark that the victims were the guilty ones.

Tony Doherty, whose father Paddy was killed during Bloody Sunday, presented Mr Corbyn with a plaque of the Free Derry Wall emblazoned with the Palestinian flag.