Conservative MP Robert Jenrick has questioned the Foreign Secretary’s planned trip to Moscow this week amid the Ukraine crisis.

Liz Truss has scheduled a trip to Russian capital to meet with her counterpart, Sergei Lavrov

Speaking to BBC Radio 4’s The Westminster Hour programme, the former housing secretary said: “I’m not sure it is actually wise to go to Moscow.”

“I think that honors Vladimir Putin and plays into his hand… I just question the good sense of going to Moscow and honoring Vladimir Putin at a time when he is so aggressive towards Ukraine.

Ms Truss missed a trip to Ukraine with the Prime Minister last week after testing positive for Covid-19.

The Foreign Secretary’s visit to Russia would be the first to the country since 2017, when Boris Johnson met with Mr Lavrov.

It comes after a former oligarch said the UK providing weapons and training to Ukrainian forces “shows to Putin that the war won’t be such an easy ride”.

Exiled Russian businessman Mikhail Khodorkovsky said bolstering Ukraine defenses was the most important way that London could show solidarity with Kyiv in the face of Russian aggression on the border.

Speaking on Trevor Phillips On Sunday on Sky News, Mr Khodorkovsky was asked whether putting more pressure on the assets of allies of Russian President Vladimir Putin in the UK would stop Moscow from launching an invasion in Ukraine.

“The pressure on the assets and the properties of the Russians in Britain has two sides,” he said.

“There are legal firms who work for them, sometimes it’s direct influence on British governing bodies. It’s really important to fight this, it’s a dangerous thing for Britain.

“That’s one part of it – the influence of Putin’s clique.

“The other thing is an ethical issue, it’s a question for British society whether it’s happy and whether the system is happy to have dirty money on the British territory.

“As far as Putin is concerned these assets are in enemy territory, he sees this as a betrayal unless these people are influencing the British system.” 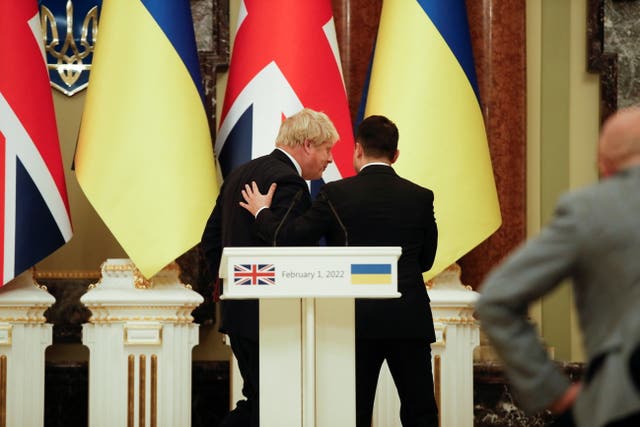 But Mr Khodorkovsky added: “More important is supplying weapons and training Ukrainians – that shows to Putin that the war won’t be such an easy ride if he’s planning one.”

“They agreed that finding a diplomatic solution to the current tensions must remain the overriding priority,” a No 10 spokesman said.

“The Prime Minister and President Macron stressed that Nato must be united in the face of Russian aggression. They agreed to continue to work together to develop a package of sanctions which would come into force immediately should Russia further invade Ukraine.”

European leaders are also due to travel to both Moscow and Kyiv in a bid to calm tensions on the Ukrainian border.

Mr Macron is set to visit Moscow on Monday and Kyiv on Tuesday, while German Chancellor Olaf Scholz will travel to Kyiv on February 14 and Moscow on February 15.