Skip to content
Home News Congress of Deputies: The Government increases its majority in 70% of the laws passed | Spain 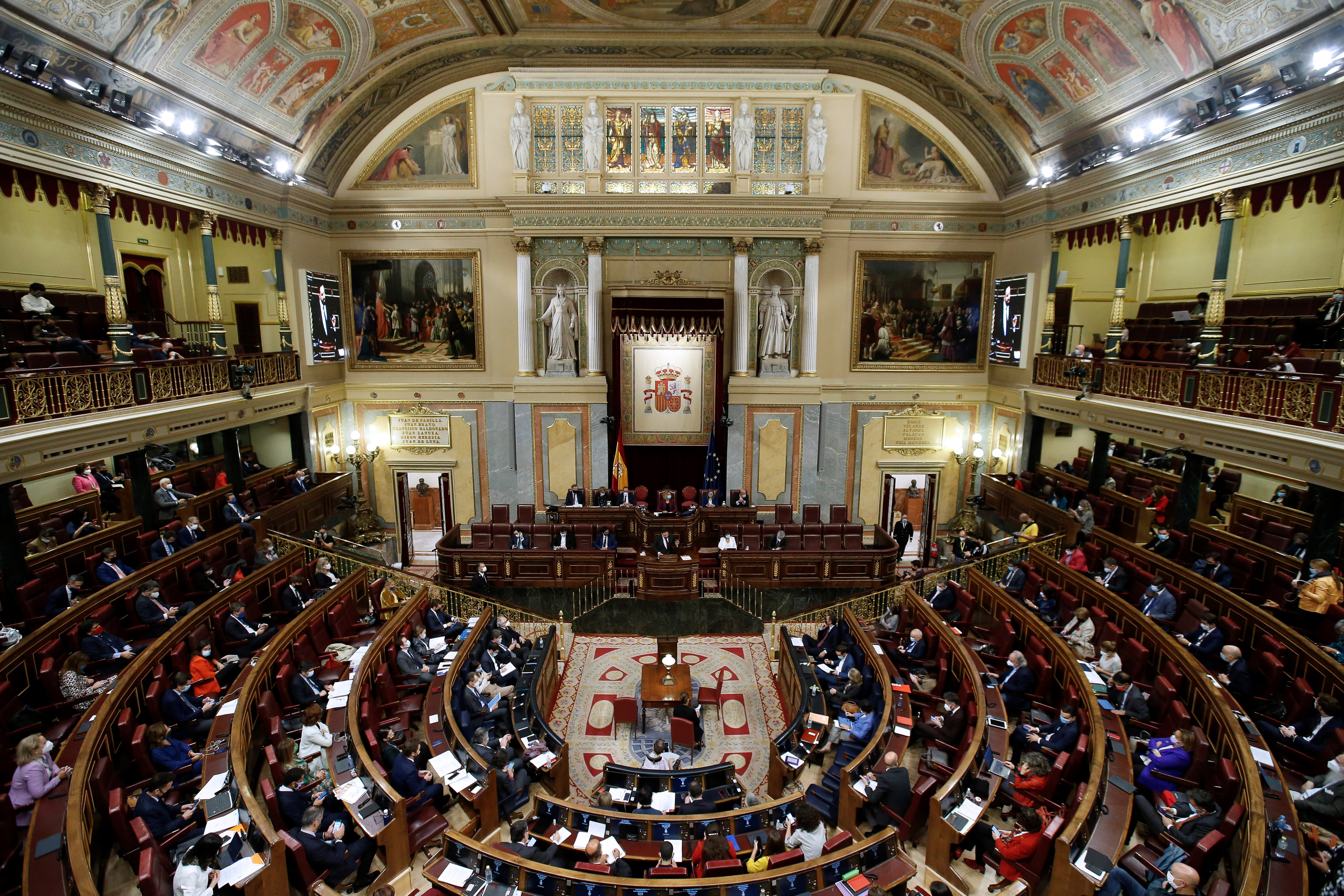 To review the fine print of what happens in the Congress of Deputies is to plunge into a paradox. The apparently weakest government has not lost any important vote and, in the midst of the worst health and economic crisis in decades, it has carried out some thirty laws in two years and has validated as many decree laws. And in the most bitter and vociferous Parliament that is remembered there are numerous legislative initiatives that go ahead with very large majorities. 70% of those that have been put to the vote in the almost two years of the legislature have attracted support that goes beyond the perimeter of what are considered habitual allies of the Government. The PSOE does not want its legislative calendar to stop and has asked the Congressional Board to speed up work on three new projects in January: sexual freedom, the so-called zerolo law on equal treatment and the one that will suppress the requested vote for residents abroad.

The majority that truly supports the Government is a still photo from the vote of the first Coalition Cabinet Budgets, at the end of 2020, the results of which have been reproduced to the millimeter a year later. The parliamentary foundations of the Executive are varied, but, for the moment, also solid: 189 of the 350 deputies, which include PSOE, United We Can, ERC, PNV, EH Bildu, PDeCAT, More Country, Compromís, Regionalist Party of Cantabria, Nueva Canarias and Teruel Exists. Of all of them, the most faithful, those who have accompanied the PSOE and United We Can in 90% of the votes on legislative measures are the group of Íñigo Errejón and his Valencian partner, the representative of emptied Spain, the Cantabrian regionalist and the PNV.

ERC’s support has been crucial at certain times, especially in the two decisive budgetary votes. But over the two years, his support for the government has had moments of faltering. Of 76 votes with legislative measures analyzed in the last two years – extensions of the state of alarm, decrees, processing and final approval of laws -, ERC has been with the Executive in 56, compared to 68 of the PNV and only two more than the 54 of Citizens.

See also  Flowers on the street, a devastated family and another young life full of promise taken too soon.

This almost balance between the figures of the independentistas and the party of Inés Arrimadas is shocking, although it is largely explained by what happened during the months that followed the explosion of the pandemic. At this point he has almost been lost in memory, but in those moments of emergency ERC left the Executive in the lurch. He opposed states of alarm and some of the government’s emergency measures. Ciudadanos, on the other hand, provided almost unconditional support to the Executive in those months, both in states of alarm and in the vast majority of emergency measures. Everything changed from the autumn of 2020, when the Government agreed on the Budgets with the independentistas and snubbed those of Arrimadas. From then on, ERC’s hand was opened to the Government while that of Ciudadanos was closed, a trend that was further consolidated after the pardons to procés leaders last June.

The budget pact also consolidated the rapprochement with the Government of EH Bildu. During the first months of the legislature, the left nationalist avoided direct support for the Executive. In the balance of the two-year votes, the formation of Arnaldo Otegi was aligned with the legislative measures of the PSOE and UP on 39 occasions, only two more than the PP. Of course, EH Bildu has also voted against very few times and has abstained on thirty occasions. Their yeses have swelled the list of favorable votes in the two Budgets and have increased as the legislature progressed.

Beyond the politically charged votes and the wild debates that they often lead to, there are a number of legislative initiatives that have garnered broad support. In 70% of the cases examined, the measures have had the approval of at least 195 deputies, with the support of forces that are not allies of the Executive, such as Ciudadanos or the Canary Islands Coalition, or even the PP in almost half of the cases. . The figures of Ana Oramas, the deputy of the Canarian Coalition, are striking, who, despite not being among the parliamentary base of the Government, has supported him in 63 of the votes, including those of the first months of the pandemic.

The aid measures for different economic sectors and other politically innocuous initiatives, such as the transposition of European directives, are the ones that have attracted the least rejection. Thus, even the group most installed in the no of the entire Chamber, Vox, has given its endorsement in 15 of the votes. At the other ideological end of the Chamber, are the other two forces that have least aligned themselves with Executive measures: the CUP, which endorsed 27 of them and the BNG, 28.

In the immediate legislative calendar of the Government, the most urgent are the laws of sexual freedom, equal treatment and reform of the vote of residents abroad, for which the PSOE has asked the Board to enable the month of January , in theory inactive, in order for their respective commissions to work on them. The Socialists point out that appearances of several ministers were already scheduled during this month, as a reply to the PP, which came out yesterday to demand that the resumption of parliamentary activity be advanced.

At the end of the month, the Government will face its most important challenge at this time, to obtain the endorsement of the Chamber of the labor reform agreed with unions and employers and whose text arouses suspicions among its partners. Another complex negotiation, the fate of an Executive used to living on the edge in Parliament and succeeding most of the time.

The PP demands that Congress reopen in January

Despite the holidays and the explosion of infections in recent days, the PP does not give up a moment in its strategy of total opposition. Already in August he had tried to force an early opening of Congress to examine the new ministers who had entered after the drastic reshuffle that Pedro Sánchez carried out in his Cabinet. And now he has returned to the charge asking that the Chamber, out of session until the end of the month, reopen immediately.

The spokesperson for the Popular Group, Cuca Gamarra, claimed it in an interview published this Sunday in Europa Press. The popular allege that the Chamber should resume its activity to monitor the health crisis and control the management of European funds so that “they generate the growth they have to generate.” “The priorities of the PP have to do with real Spain and what society lives and suffers at all times, that is why we are going to demand that the Congress not be closed in January,” said Gamarra.

The Secretary of State for Relations with the Courts, Rafael Simancas, replied to the popular spokesperson on Twitter. “That we have just started the year and you’re already screwing up,” he replied to Gamarra. “Congress already ‘opens’ in January for the issues you have asked for: electoral law, equal treatment law, independent authorities, and the ministers of Science, Culture, Education go to the Senate …” Simancas provides the requests addressed to the President of Congress, Meritxell Batet.

In his interview in Europa Press, Gamarra insists on the offensive declared by his training against the First Vice President and Minister of Economy, Nadia Calviño. The popular spokesperson points out that Calviño announced for last year a growth of 9.8%, of which 2.6 points were linked to the execution of the first European funds. “However, the almost non-existent execution of the same – it has not even reached 5% of the 24,000 million budgeted for 2021 – means that this growth linked to the funds has not occurred,” said Gamarra. That is why he requests that the Congressional Economy and Finance committees immediately examine the management of that money that came from Brussels and that the Health Committee also meet to address the sixth wave of the pandemic.