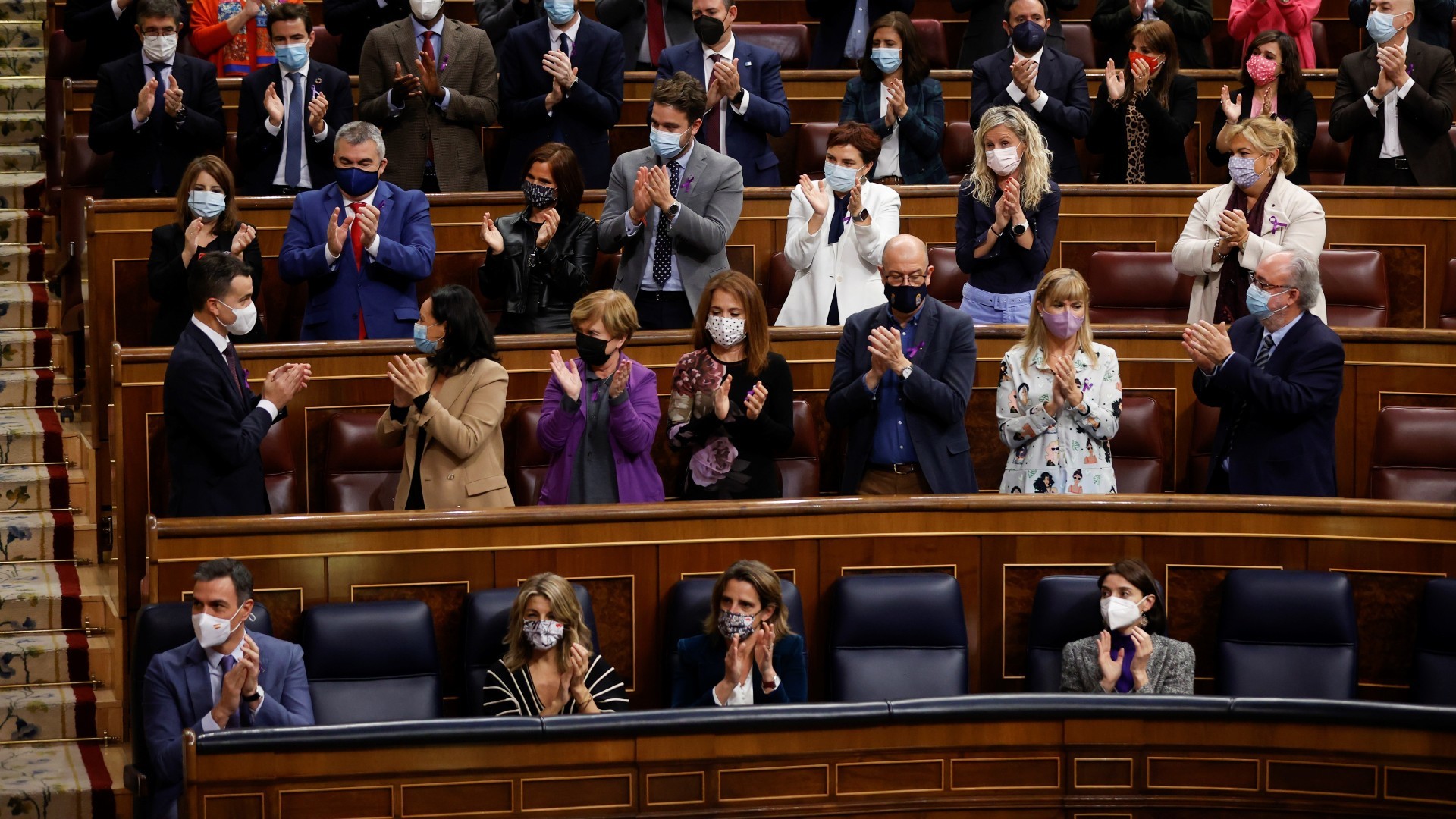 The State’s general budgets by 2022 they have come out ahead no surprises this Thursday in the Congress thanks to the block majority of the investiture. The coalition government of Pedro Sánchez has underpinned the support of its partners with public accounts that represent a record of expenses and income for European funds and has guaranteed the continuity of the legislature.

The Budgets have received the 188 favorable votes of PSOE, United We Can, ERC, PNV, EH Bildu, PDeCat, More Country, Compromís, PRC, Nueva Canarias and Teruel Existe. The Basque nationalists, who had not confirmed their support, have ended up supporting the public accounts and the only one that has detached itself from the investiture block has been the BNG, which has abstained, as announced days ago. The PP, Vox, Ciudadanos, JxCat, the CUP, UPN, the Canary Islands Coalition and the Asturias Forum have voted against it.

With the vote, the debate on the partial amendments has ended. A debate that has coincided this Thursday with the International Day Against Gender Violence and in order to metal strike in Cádiz, who have been present in the speeches of several deputies.

After almost a month of processing in Congress, the path of public accounts must continue in the Senate, where the Government awaits an ‘express’ procedure for the Budgets to come into force for January 2022.

Is about the second budgets that the coalition government manages to carry out, although this time there have been fewer difficulties than the journey that those of 2021, when the PSOE tried to combine the support of ERC and Ciudadanos in a negotiation with the orange formation that strained the coalition and that finally did not go ahead.

Record of public spending and criticism of PP, Vox and Cs

These accounts mobilize record spending amounts to finance especially public policy and the largest game is directed to the pensions. The ministries of Social Security, Transport and Defense are the ones that will receive the largest amounts, while investment by autonomous communities is led Andalusia and Catalonia, which double what other autonomies such as the Valencian Community and Madrid will receive.

The Government defends that it is some “fair” budgets that have as objective “leave the crisis behind” caused after the hit of the pandemic. In this Thursday’s debate, the spokespersons of PSOE and United We Can (Héctor Gómez and Pablo Echenique) have highlighted that it is about the Budgets “most social in history” and have charged against the “doomsayers” that indicate that everything will go wrong, especially with regard to recovery.

See also  What are the purple badges worn by parliamentarians?

They disagree the main opposition leaders, who have criticized at all times a “Festival of spending” based on a economic forecasts that are “lies” (and that the different national and international organizations have been reducing) and that “Fry to taxes” to the Spanish. But above all, they have criticized the pacts with ERC and especially with Eh Bildu, pacts that “freeze the blood” (according to the leader of the PP, Pablo Casado), and that make them “the ETA Budgets” (according to Vox).

Precisely, ETA sneaked in this Wednesday in one of the most intense debates in Congress, when the Socialist deputy Odón Elorza shouted to the bench on the right: Stop using victims to denigrate a budget, don’t be so miserable, leave ETA terrorism alone, ETA disappeared, ETA is not here, here There are no terrorists, there are Francoists!”.

Some statements that have harshly criticized the opposition, especially PP, Vox and Cs, who accuse the PSOE of “whitewashing” ETA. In the final statement of reasons, the PP spokesperson, Elvira Rodríguez, has stressed that the accounts have been amended to the “dictation” of ERC and Bildu to approve them “at whatever price.” Iván Espinosa de los Monteros has insisted that they are accounts of “ruin” and that they do not add up because “mathematics and the left are not compatible.” And Edmundo Bal (Cs) has said that the changes to the PGE have been made “in the dark room”, “sitting Mr. Sánchez, Mr. Rufián and Mr. Otegi”.

Before the debate on partial amendments, these three parties had tried to veto public accounts by presenting amendments to the whole, as well as Junts, the CUP, Foro Asturias and Coalición Canaria. His vows, however, were insufficient to knock down the Accounts in Congress earlier this month. Then, the opposition also harshly charged that the Prime Minister, Pedro Sánchez, and most of the ministers were not present at the beginning of the debate on public accounts.

ERC and the PNV, two strategic partners of the Executive, were just minutes (as recognized by its spokespersons) to present a veto to public accounts given the difficulty of negotiations with the Executive. And in fact, during the debate on amendments to the whole, all the Government partners warned that their support then it was not “a blank check.”

But the following weeks have been fruitful in the negotiations with these parties, which have achieved that the Executive has supported several of their amendments and accepted other commitments apart from them.

Specific, for ERC the “shielding” of Catalan was fundamental in the future Audiovisual Law, the point that has been more complicated in the negotiation after the Executive agreed to resolve the “non-compliance” of the investment for Catalonia of the 2021 Budgets. Esquerra finally ended up announcing his support this week after the Executive’s commitment to have a minimum of 6% content in Catalan, a percentage somewhat lower than that requested.

Precisely, this same Thursday, when another 75 amendments have been debated, the Government has agreed to one of ERC, EH-Bildu and BNG to include in the PGE a fund for the promotion of cinematography in co-official languages ​​endowed with 10.5 million of euros.

ERC It has also achieved other issues, 50 million in territorial investments or the transfer to Catalonia of ten million for the purchase of public housing from Sareb. In turn, it has agreed to equalize the retirement conditions of the Mossos d’Esquadra with those of the National Police and the Ertzaintza, something that at the request of EH-Bildu has also been transferred to the Navarra provincial police. But has not succeeded in getting the Executive to accept the closure of the Vía Laietana national police station, in Barcelona, ​​a measure that he wanted to negotiate in parallel to the budgets. Your parliamentary spokesperson, Gabriel Ruffian, has taken advantage of the debate to warn the left parties: “We are not achieving conquests but stopping setbacks”.

The PNV has kept the question of his vote until the end, although he has been supporting the public accounts throughout their processing until now, so his ‘yes’ was also foreseeable. The Basque nationalists have obtained the Executive’s commitment to improve the economic benefit for the care of minors affected by cancer or another serious illness, a help that will extend from the 18 to the 23 years. The Executive has also committed to the “full” transfer of the management of the Minimum Living Income (IMV) to the Basque government.

Eh Bildu has achieved the Government’s commitment that the “social shield” deployed in the pandemic “be permanent by law” in matters such as suspension of evictions of vulnerable households with no alternative housing. There will also be un new channel ETB3 (a public channel in Basque with children’s content) throughout Navarra. The negotiation with EH-Bildu, however, became controversial after its general coordinator, Arnaldo Otegi, said before his militants: “Yes, to get the 200 prisoners out (from ETA) we must vote the budgets, because we vote “. His parliamentary spokesman, Mertxe Aizpurua, has stressed that the approval comes thanks to “the decision of the Basque and Catalan pro-independence leftists” to “improve the lives of all state workers.”

The BNG Finally has come down from the investiture block by failing to achieve the Executive’s commitment for a “Worthy train” that connects the capital of Lugo with the other cities of Galicia: “The Government continues to forget about Lugo” and does not accept “the proposals of the BNG to improve the line from Lugo to A Coruña, nor to join Lugo with Compostela.”

The amendments by PP and Ciudadanos to try to stop the salary increase for President Pedro Sánchez and the members of the Executive of coalition that is contemplated in the budget project for 2022. PSOE, Unidas Podemos and independentistas have saved a salary increase of 2% that, however, was rejected for deputies and senators because, according to Unidas Podemos, it was not necessary.