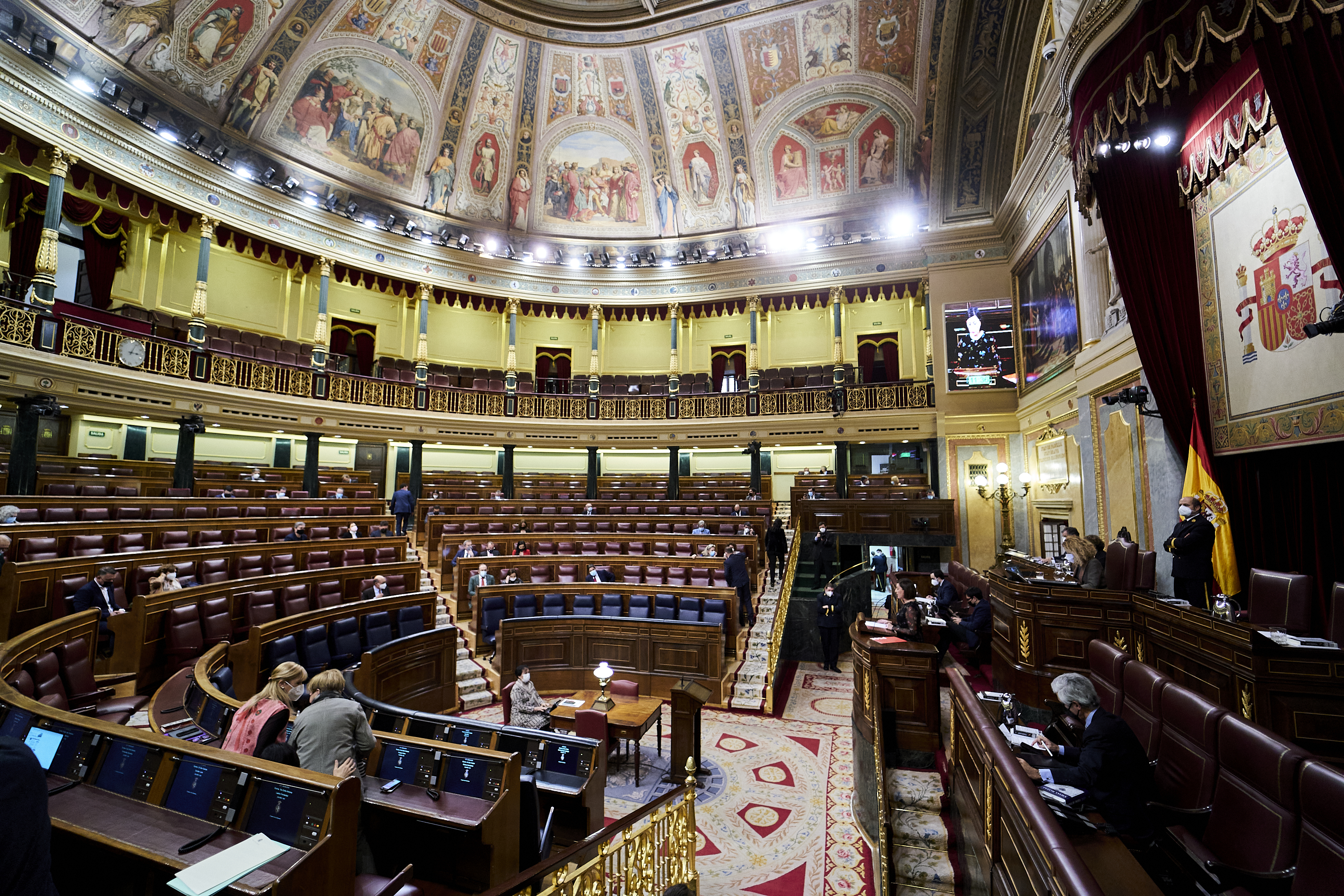 The Congress of Deputies is heading again towards teleworking in the face of the proliferation of infections. The news that the general secretary of the PP and deputy Teodoro García Egea, and the mayor of Madrid, José Luis Martínez Almeida, were infected this Tuesday led this party to impose massive tests on its cadres. The telematic vote thus returned to the hemicycle, after just two months of recovery of the face-to-face voting of 100% of the deputies. The measure, agreed unanimously in the Table and with the support of all the parties in the Board of Spokespersons, will now be extended to see how the virus situation evolves until February, when the new session is resumed.

United We can take advantage of the “parabolic and vertical phase” of the epidemic to demand more capacity limits in Congress (now a physical presence of 75% is recommended, although in reality it is less) and the requirement of a covid certificate to work and move through some dependencies of the lower house. The proposal sparked a debate that divided the parties. The president of the Cortes, Meritxell Batet, settled the discussion while waiting for the health authorities of the Community of Madrid, where Congress is located, to determine future and greater restrictions, which for now they do not plan to do.

“We fear that time will prove us right,” said Pablo Echenique, the spokesman for United We Can, after the rejection of his request to increase mobility restrictions in the lower house given the evidence that none of the 16 parties with representation it is free of contagions.

ERC spokesman Gabriel Rufián corroborated that concern and related it to the fact that Congress is a workplace with “exceptional mobility that deserves special measures”, such as the aforementioned covid passport to access its restaurant and cafeterias and not only for protect the deputies but also its many employees. As Batet, and later the PSOE spokesperson, Héctor Gómez, and that of the PP, Cuca Gamarra, seized on the fact that such limitations were imposed on the Madrid health authority, Rufián and other leaders pointed against the popular Isabel Díaz Ayuso and its determination not to apply restrictions. The Republican spokesman advanced: “There is scope for Congress not to abide by the norms of Mrs. Díaz Ayuso.”

Batet, however, rejected that hypothesis. For now. The Board of Congress, which includes the PSOE, United We Can, PP and Vox, did unanimously agree to resume the telematic vote, as was experienced during the pandemic from March 2020 to the end of October 2021. Then, in the Board, The president insisted on Echenique’s request that this responsibility belongs only to the Community of Madrid. The debate was reproduced at the exit of that appointment in all the appearances and confirmed the enormous concern about the explosion of omicron cases, the division before the actions that should be taken and the appointment of Ayuso as the public responsible that will be unmarked this Wednesday of the other regional presidents in the Conference of Presidents when following common guidelines in the current fight against the pandemic.

Pablo Echenique took the opportunity to disqualify as “reckless” that Ayuso, and other regional presidents, now defend imposing the obligation to wear masks abroad and yet have applied strong cuts to primary health care in their territories, with the collapse and lack of information that has been observed in most health centers.

Both Ayuso and his Health Minister, Enrique Ruiz Escudero, ratified this Tuesday that they are against applying more restrictions in Madrid, that they now reject the covid passport that at the time they wielded as good and also that they will not assume joint rules imposed by the Government central to the imminence of the Christmas holidays. The president blamed Sánchez for not having any plan and not getting behind the wheel of this crisis. Those will be your theses before the Conference of Presidents. His opposition to the covid passport collides with what other regional leaders of the PP maintain and have applied, such as the Andalusian Juan Manuel Moreno, the Galician Alberto Núñez Feijóo or the Murcian Fernando López Miras.

In Congress, members of the Executive such as ERC, the PNV and Compromís supported the idea of ​​United We on the covid test. More Country and the CUP, however, understand that this restriction is not appropriate given the high levels of vaccination in the country, above 92%.

The general secretary of Vox, Macarena Olona, ​​denigrated that idea, which she called an “inquisitorial, dictatorial and discriminatory measure” and “an instrument of social control” by the central government “to confront the citizens.” And she announced “as a Spanish, a free and vaccinated woman with a full schedule” that she will refuse to provide that certificate in the bars and premises of the autonomies that now require it and that Vox will appeal it through the courts until it reaches the Constitutional Court.

In the Senate, while the group’s amendments to the State Budget project for 2022 were debated on Tuesday, the representative of Junts, Josep Lluís Cleries, responded to a PP senator who reproached him for the high incidence of COVID infections now in Catalonia that, at least in that community, its government has taken drastic solutions such as night curfew or reducing traffic. The president Pere Aragonés will take these proposals to the Conference of Presidents and deliver them to the Superior Court of Justice of Catalonia. Cleries snapped: “I do not know if it is very prudent that in this panic situation before the sixth wave we are here 265 senators.”

Allegations of Lack of Leadership from the President

“Late and bad”, “lack of leadership”, “without prior preparation”. Most of the parties in Congress, both in the opposition and in positions closer to the Government, have also criticized that Pedro Sánchez arrives this Wednesday at the convocation of a new Conference of Presidents in full swing of the sixth wave of the already rare pandemic hours of the Christmas holidays without a clear position or concrete proposals to formulate. The main partner, United We Can, tried to avoid direct criticism but demanded from all governments and public administrations “a shock plan for primary health care” and not be left alone in the face of an epidemic in a “parabolic and vertical” phase with such basic responses. such as the mandatory use of masks in outdoor spaces.

See also  Road trip with a dog? Tips for making you both happy

The first one who did not like at all how this new Conference of Presidents has been organized, telematics and in the Senate, was the PNV parliamentary spokesman, Aitor Esteban, who this Tuesday regretted arriving at that appointment without having “matured the decisions” with a good preliminary work for each interlocutor to explain at that summit how he sees the situation. Esteban fears that the meeting thus “does not solve anything” when “it should be the staging of agreements made before” to reach “some minimum common denominators.”

Joan Baldoví, from Compromís, found that the appointment “arrives very late” and understands that now it would be “unpresentable” to take measures two days before Christmas and he missed that the Government had taken any initiative before. Íñigo Errejón, from Más País, is also afraid that the conference will end without any announcement for not doing their homework beforehand and expressed his wish that those summoned do not end up fighting and can agree on “clear and sensible instructions.” Mertxe Aizpurua, from EH Bildu, insisted on demanding “transparency and common sense.” And Gabriel Rufián, from ERC, attacked the unchecked Madrid Isabel Díaz Ayuso.

The spokesmen of the PP, Vox and Ciudadanos, Cuca Gamarra, Macarena Olona and Edmundo Bal, reviled that the Executive appears again to respond to a wave of the virus “late and bad”. And they agreed to question Sánchez for not taking the initiative and hiding behind co-governance with the autonomies.

La Moncloa rejects the accusation of inaction. “The Government relies on collegiate and shared decisions,” the Minister Spokesman added on Tuesday. Isabel Rodríguez defended that the Executive and the autonomies have never stopped working together and reiterated that the roadmap goes through vaccination and prevention.