Skip to content
Home News Confessions of failure: new installment of the chronicles of Emmanuel Carrère since the trial for the attacks in Paris | Culture 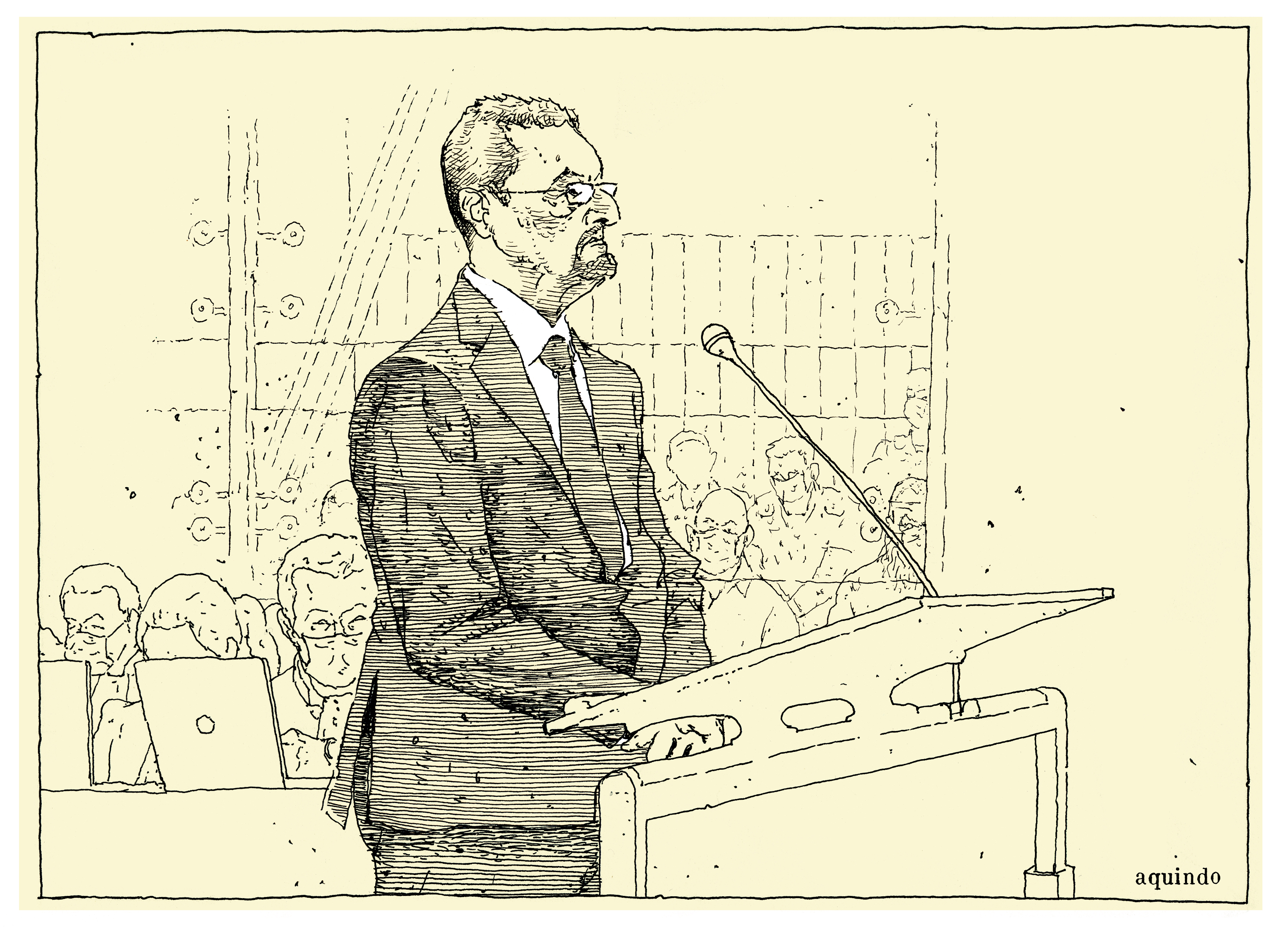 This is what they call in the police language the sinister grove, below the peripheral boulevard, which was the penultimate refuge of Abdelhamid Abaaoud before the floor squat de Saint-Denis where he was killed by the Raid (Unité Policière d’Intervention). Terrorist hideouts are also called “conspiracy floors”. This adjective has become a private joke among the followers of the judgment. For example, him bistrot from Dauphine Square where we meet before an audience, there are a few of us who call it the “conspiratorial cafe”: “At 11:30 in the conspiratorial cafe, okay?” These jokes are not made only by journalists prone to black humor, but by civilian parties, former hostages of the Bataclan, a small informal group of people who have in common attending every day because Friday the 13th seems as addictive as a series. However, for a week you really have to be hooked to come daily.

We have entered an arid period of the trial in which investigators from the DGSI, the DGSE (Direction Générale de la Sécurité Extérieure), the Belgian police intervene, who obviously have interesting things to say, but to those of us who listen, for their security, protected by anonymity, that is, in videoconference and with a pixelated face. To liven things up, a Power Point sometimes appears on the screen. On the press benches, colleagues sigh. Those who know the summary well are taught nothing. Even I do not learn (almost) anything new, because I have carefully read two books that tell the same stories of espionage and counterespionage, but that tell them better: The cell (Les Arénes), a graphic novel by Soren Seelow, the terrorism specialist from The world, and Spies of terror (Harper Collins), by Matthieu Suc, journalist of Mediapart. I recommend both.

2. The gendarmerie of Vesoul

I asked Matthieu Suc if he had heard anything on the podium that was not already in his book, published in 2018. “Yes,” he replied, “the testimony of Bernard Bajolet, then the head of the DGSE.” “To Bajolet, a wall-gray in his sixties who could be the model for Jean-Pierre Darroussin in Infiltrators officeHe does not like the light, as a good spymaster. However, he has appeared in person and face uncovered. When asked about his address, he replied: “The Vesoul gendarmerie, let’s say.” Understand who understands, we laughed, but the continuation was not so funny. What he tells without detours and without sneaking is that his services screwed up.

See also  Platinum Jubilee: What happened when King George VI died and the Queen took over

Since the beginning of 2014, it has been known that Europe and especially France are under the threat of massive and organized attacks, and we know several of the future terrorists: six or seven, says Bajolet coldly, of the ten members of the command. They have closely followed the career of a small Belgian jihadist, Abdelhamid Abaaoud, who became famous for a video where he is seen, dead laughing, at the wheel of a 4×4, dragging a dozen infidels through the dust, before playing to football with a decapitated head. This feat earned him gallons.

From the immigrant brigade, a gang of young Franco-Belgian sadists operating in the Aleppo area, passed to Copex, the Islamic State cell dedicated to terrorist operations abroad. Strongly structured and hierarchical, the Copex, whose organization chart will be detailed by agents 948SI and 1310SI, is headed by a certain Oussama Atar – Yassine Atar’s brother, who is in the dock – but it is Abaaoud who recruits and trains the defendants. candidates for suicide operations being prepared in Europe.

The French services, and not only the French, know this so well that in January 2015 four – with the Belgian police, the CIA and the Mossad – joined forces to secure him in Athens, cordoning off an entire neighborhood. But they did not catch him and from then on Abaaoud disappeared from the radars and will not be seen again until November 16, 2015, first in the bush and then in the conspiratorial apartment of Saint-Denis. The DGSE and DGSI (whose good relationship, according to Matthieu Suc, Bajolet exaggerates a bit) agree in thinking that it is somewhere in Syria and in hoping that a bomb ends up falling on them. No one doubts that Abaaoud is coordinating the return to Europe of the members of the future command, whom Salah Abdeslam is going to find by car, three at a time, in Vienna or Budapest.

Nobody pays much attention to the testimony of a returnee who, arrested in August 2015, explains very clearly what Abaaoud is about to do: “Choose an easy target, where there are people. A concert, for example. And what I can tell you is that it is going to happen very soon. ” Total, a failure in all the line that Bajolet recognizes with a sad sincerity, quite impressive. The same will not be said of Belgian researchers, who have not done better, but who avoid questions, divert responsibilities – “Ah, no, it was not my service, colleagues will explain it better than me …”—, and have not had the courage to physically appear at trial. Security imposes it, their bosses claim, except that they do not show the same modesty to be shown on Belgian television. Result: have made the decision themselves or on the advice of their lawyers, five of the defendants have announced that they will not appear either. Thus, the debates continue before the empty half of the bench.

It is a real problem that some defendants refuse to appear. They have the right to refuse, they cannot be compelled, but in addition to losing some of their interest, the situation notably prolongs the hearing. They refuse, it is recorded in the minutes, the session is suspended. They are ordered to return, the hearing is suspended. They are sent to a bailiff to tell them what happened in their absence, the session was suspended. Etc. I walk on lead because of the presumption of innocence, but in any case it cannot be said that the five defendants – Salah Abdeslam, Mohamed Abrini, Sofien Ayari, Osama Krayem and Mohamed Bakkali – who, like Klaus Barbie in another era, they have opted for the empty chair policy, they are the biggest fish in this trial. They can be debated about their degree of involvement in the attacks on Friday the 13th, but not about their status as terrorists. So that only the subordinates remain on the bench, those who have the possibility of not failing too badly criminally and for this reason their clothes are tempted. And then there are the three who do not sit on the bench but in front of it because they appear free, under judicial control.

Those three intrigue me. I look at them, sitting in a row. They have an air of beaten dogs, of students who have failed. If one speaks to the other, in a low voice, the third stretches his neck, afraid of being left out. Sometimes they laugh. They take notes. They come and go like us. One day the hearing started late because to begin with, all the accused had to be present, and Hamza Attou was missing. Everyone was waiting for him. Contrite, he explained that it was not his fault, that the subway had blocked between two stations. “For this time pass,” said the president, with that attitude of a paternalistic director that sometimes makes him so kind, “but from now on take precautions.” When we hear him tell his life, during the personality interrogation, you don’t want to be mean to Hamza Attou. Nor with Ali Oulkadi and Abdellah Chouaa. These three, of course, are not saints, but they only appear in the summary in a collateral way and I wonder how they live the hideous bad filly of being side by side with dangerous terrorists in this gigantic trial that the whole world contemplates. What a life they lead during these nine months. Where they live, what they fear and what they hope for, what they tell their families. Yes, I wonder and if I dared I would like to ask them.