Skip to content
Home News Conference of Presidents: Sánchez brings together presidents without concrete proposals and with communities calling for the return to the mask | Politics 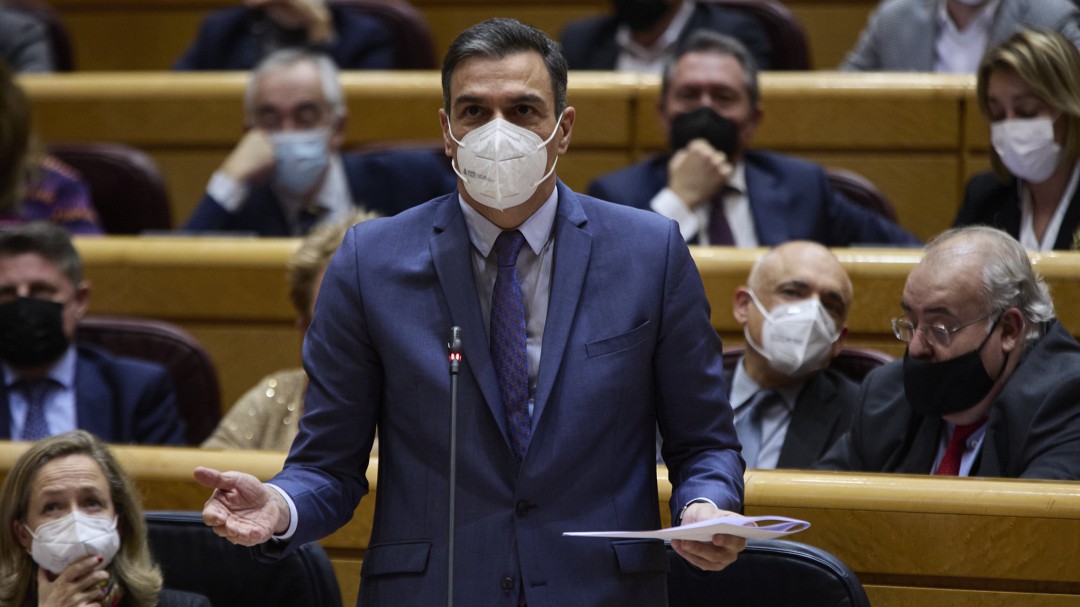 The head of the Executive, Pedro Sánchez, and the leaders of the autonomous communities meet again this Wednesday afternoon, telematically, in a Conference of Presidents that will be marked by the request of at least seven regional leaders that The mandatory use of the mask outdoors is back, while the central government has not specified whether it will carry any specific proposal.

In this way, the Senate will be the operations center from where the Government will direct this Conference from 4:30 p.m. in which the presidents of the 17 autonomous communities and the two leaders of the two autonomous cities will connect telematically to address the explosive increase in coronavirus cases in recent times.

It is an extraordinary call, which has been announced just five days in advance, since Moncloa reported last Saturday of this celebration and, the day after, Sánchez appeared from the Government delegation in Catalonia to ensure that this Conference was convened. of Presidents to address the COVID-19 situation, with the ‘omicron’ variant, just 48 hours before Christmas Eve.

In any case, the Government spokesperson and Minister of Territorial Policy, Isabel Rodríguez, has not specified in the press conference after the Council of Ministers whether the Government will take any proposal to the Conference of Presidents and has affirmed that the Executive’s approach is that of “listening” and “seeking shared decisions” with the autonomous communities.

Isabel Rodríguez herself has not clarified whether the Government is in favor of establishing new restrictions in the face of the rapid increase in COVID-19 cases in recent days or what these measures would be and has limited herself to indicating that they will value “a common minimum denominator “that can be applied throughout the country.

In this context, the Government spokesperson has affirmed that the Executive will listen to all the autonomous communities and that some of them have already positioned themselves “and not all of them think the same.” In this sense, he added that they are very respectful of the decisions of each autonomy and that what the Executive intends is to coordinate a “lowest common denominator”.

The return to the mask, a possible measure?

The regional presidents of Castilla y León and Navarra have joined their counterparts from Andalusia, Castilla-La Mancha, the Valencian Community, Galicia and the Basque Country in the last hours, and will propose to Sánchez, at the Conference of Presidents, that the mandatory return using the mask outdoors.

This is how the different autonomous governments have spoken throughout these days, thus reacting to the convocation of this Conference of Presidents. In this context, more and more regional leaders are proposing to reuse masks outdoors as one of the measures to, in their opinion, control the increase in cases.

In addition, at least four regional presidents – Catalonia, Andalusia, Aragon and Murcia – also insist on asking the Government to launch a Covid Fund by 2022, while the President of Catalonia, Pere Aragonés, intends to force Sánchez to extend its measures – closure of nightlife, curfew and limitation of social gatherings – throughout Spain.

Its partners denounce the delay in meeting the presidents

This morning, several parliamentary partners of the Government have agreed to censor Sánchez’s “improvisation” in the face of the sixth wave of the coronavirus pandemic, with the expansion of the omicron variant, and have criticized that the Conference of Presidents is late, only two days before Christmas Eve.

This is how the representatives of the PNV, Más País, Compromís, PDeCAT, ERC and Bildu, among others, have spoken.

In any case, it is expected that Sánchez and the Government delegation will operate from the Enrique Casas Vila room of the Senate from 4:30 p.m. Before, at 4:20 p.m., you will be received by the president of the Upper House, Ander Gil.

Later, when this Conference of Presidents ends, the Minister of Territorial Policy and Government spokesperson, Isabel Rodríguez, plans to appear before the media, in a face-to-face press conference, from the Europe Room of the Upper House.