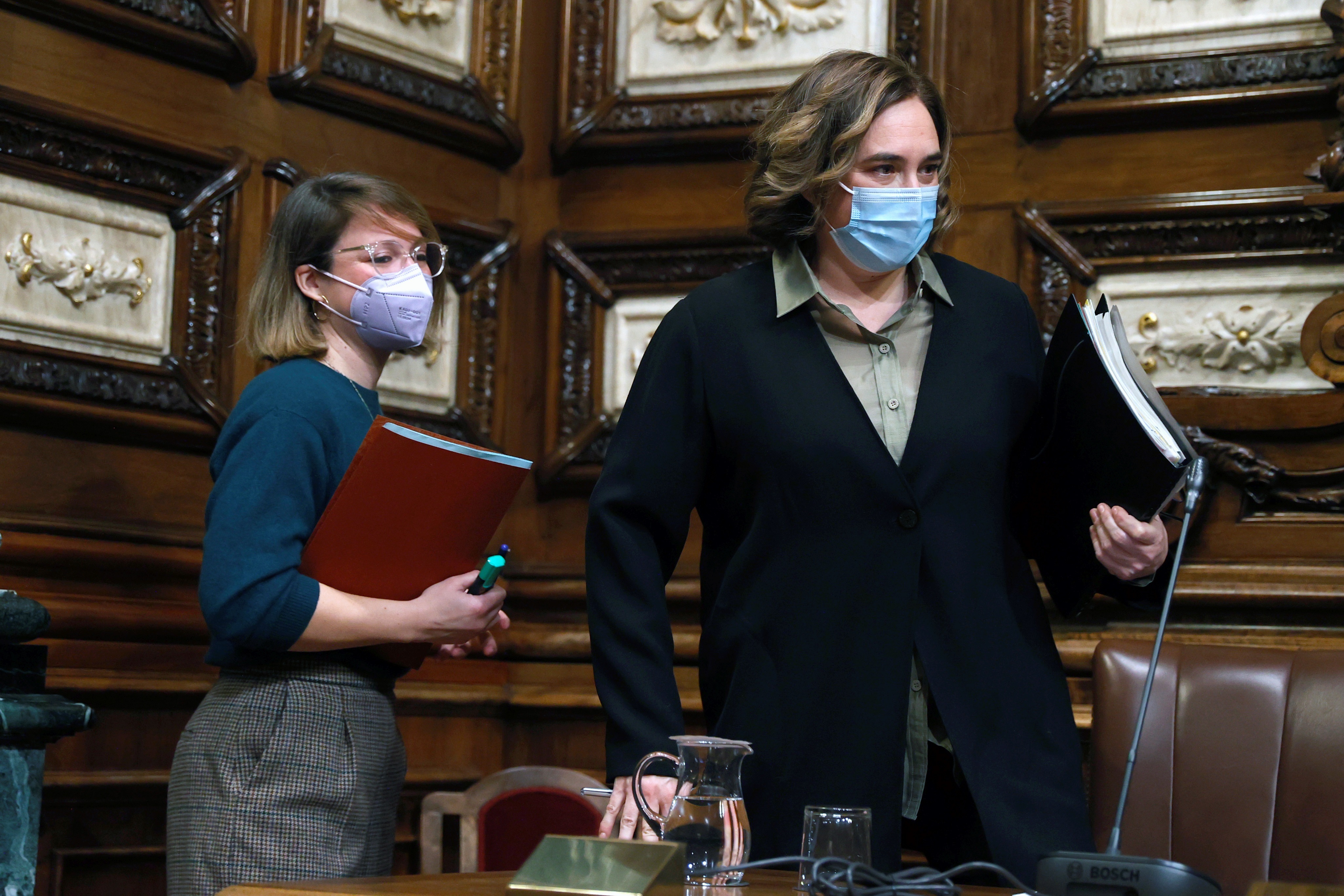 The mayor of Barcelona, ​​Ada Colau, this Thursday managed to approve -in the last plenary session of the year- the Barcelona Budget thanks to the support of Barcelona pel Canvi, the party founded by Manuel Valls and now led by Eva Parera. The government coalition formed by BComú and PSC has 18 councilors, but to approve the Budgets they needed 21. Ernest Maragall, reluctantly, had already announced that ERC would abstain in return for the yes of the Commons to facilitate the Budget of the Generalitat. Even so, the PSC continued to dialogue with the Valls heirs –who have recently changed their name to Valents- and has managed to get the two councilors of the formation to vote in favor together with Marilén Barceló, the non-attached councilor who wanted to go from Ciudadanos to Barcelona pel Canvi but that the municipal regulations did not allow it. The Budgets have thus counted with 21 votes in favor (BComú, PSC and Barcelona pel Canvi), 10 abstentions (ERC) and 10 negative votes (Junts, PP and Ciudadanos).

In plenary session this Wednesday, the tax ordinances were also approved: the municipal rates that will remain mostly frozen in 2022 thanks to the fact that both Barcelona pel Canvi and ERC also abstained.

Despite the favorable votes and abstentions, the last plenary session of the year was tense. A plenary session that was not attended in person by all the councilors since the sixth wave of the covid has forced most of the public representatives to follow and intervene from their homes. Who did attend was the local leader of the PP, Josep Bou, who at the end of last week confessed not having the complete schedule of covid vaccines and assured that this Thursday afternoon he would go to be vaccinated with the second dose.

The first deputy mayor, Jaume Collboni (PSC), praised a Budget that reaches a record figure of 3.4 billion euros. “It is 4.7% higher than the previous one. It is historic and it will allow us to make more investments ”, assured Collboni. The sixth deputy mayor, Jordi Martí (BComú), recalled that the 2015 Budget was 2,500 million euros and the increase meant that the City Council was gaining economic weight. “Barcelona is the city that dedicates the most social investment in the entire State. This is a continuity budget that consolidates the great agreements between the forces of the left ”, concluded Martí.

Maragall did not quite like Martí’s complicity and made it clear that he was abstaining and making Budgets possible because ERC was interested in the support of the Comuns in the Generalitat. “I am amazed at his capacity for hugging and intelligent cynicism,” Maragall addressed Martí. From here began his criticism of Bcomú and PSC. “Barcelona and Catalonia will have Budgets. It is good news but just any budget is not good news ”, I regret. He accused the government team of negotiating with the right wing of Barcelona pel Canvi and accused Colau’s team of distancing themselves from “what the city expects.”

The leader of the Junts, Elsa Artadi, made a detailed list of the “non-compliances” of the government team and thus justified her negative vote on the Budget. Citizens’ spokesperson, Luz Guilarte, denounced that “Barcelona works as a de facto tripartite” and accused BComú, PSC and ERC of “exchanging cards” to approve the accounts. “This is not the time to allocate money to tactical deurbanism or to trams that no one has asked for,” he settled. The leader of the PP, Josep Bou, asked to reduce the number of municipal organizations and companies and accused the government of being “opaque.”

One of the most anticipated interventions was that of Eva Parera, from Barcelona pel Canvi. “We and the PSC are the only responsible parties. The PSC, despite having the guarantee that the Budgets were approved with ERC’s abstention, has continued to dialogue with us, ”Parera said. He also launched a criticism of ERC and BComú warning that “Barcelona is not a bargaining chip”, in clear reference to the exchange of votes between the Generalitat and City Council Budgets. For the rest of the opposition there were also lessons: “The politics of no does not contribute anything. These are not the budgets that we would make if we were in government but we have reached an agreement. I ask the government to think more about us and less about ERC. ” Parera accused ERC of not being “the alternative to nothing.”

The votes in favor of Barcelona pel Canvi were also decisive in modifying the terraces ordinance and thanks to the votes in favor of the government team and the heir party of Manuel Valls, the terraces that were exceptionally located on the road during the pandemic have been consolidated. . The Deputy Mayor for Ecology, Urban Planning, Infrastructure and Mobility, Janet Sanz, warned that this approval gives legal certainty to road terraces and provisionality is left behind, definitively promoting the removal of concrete blocks.

In addition, the plenary session finally approved the new tourist accommodation plan (Peuat), which maintains the prohibition of renting tourist rooms for periods of 31 days or less and the center of Barcelona as an area of ​​decline, so that if a hotel closes it will not you can open a new one. The municipal government groups (comuns and PSC) and ERC voted in favor, while Junts, Cs, PP, Valents, and the non-attached councilor, Marilén Barceló, voted against. Sanz defended that they will never stop “having a tool like this that allows for control and order” which, according to her, has allowed a sustained and sustainable increase since its application four years ago. After the debate in plenary and in statements to journalists, the Councilor for Creative Industries and Tourism, Xavier Marcé (PSC), pointed out in statements to journalists the “differences in criteria” with BComú on the management of shared rooms, and that socialists believe goes beyond tourist effects.