The ‘monumental seizure’ of cocaine was found within five pallets of bananas at Southampton docks on March 17, and is said to be the largest find in the UK since 2015

Cocaine worth £302million was found in a Colombian banana boat and is the UK’s biggest seizure since 2015.

The “monumental seizure” of cocaine was found within five pallets of bananas at Southampton docks on March 17.

Home Secretary Priti Patel said it was the “largest seizure of cocaine in the UK since 2015”.

Border Force said the cocaine hydrochloride, which is used to make crack cocaine, weighed about 3.7 tonnes.

Ms Patel said: “It should serve as a warning to anyone trying to smuggle illegal drugs into the country that we are out to get them.”

The container of 20 pallets of fresh bananas had recently arrived from Colombia.

It is the largest seizure of cocaine since 2015
(

It was targeted for inspection by Border Force and NCA officers.

Peter Stevens, NCA regional head of investigations, said: “This was a monumental seizure of cocaine with a street value of around £300m.

“The organized crime group behind this importation has been denied massive profits which it would have ploughed back into more offending.

“There’s no doubt some of this cocaine would have been cut up and sold across UK streets, feeding crime and misery in our communities.” 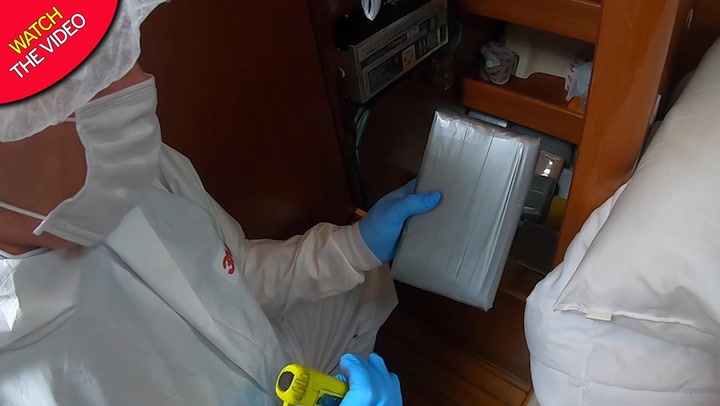 Last year, almost a tonne of cocaine thought to be worth around £80million has been seized after washing up on UK beaches.

Two consignments of the Class A drug were found on the pebbles near Hastings and Newhaven in East Sussex.

They were discovered by passers-by in multiple waterproof bags with lifejackets attached to make them float.

Sussex Police were alerted and removed the drugs to a secure location.

Samples tested positive for cocaine and a full forensic examination will now be carried out.

The packages have a combined weight of 960 kilos – the approximate weight of a small car – and are estimated to be worth around £80 million if cut and sold on UK streets.

In 2020, more than a tonne of cocaine worth about £100million was found hidden in a shipment of banana pulp from Colombia.

Border Force officers discovered the concealed drugs, which were destined for the streets of Europe, during a routine inspection at the London Gateway depot in Thurrock, Essex.

A total of 1,060 kilograms of cocaine were found hidden in a shipping container docked at the port on the Thames Estuary.

It is thought that the drugs were put in the cargo in Colombia – the world’s leading supplier of cocaine – and were due to arrive in Antwerp, Belgium.

British boxer, 44, arrested along with wife, 23, amid accusations he ran ‘brutal drug gang’