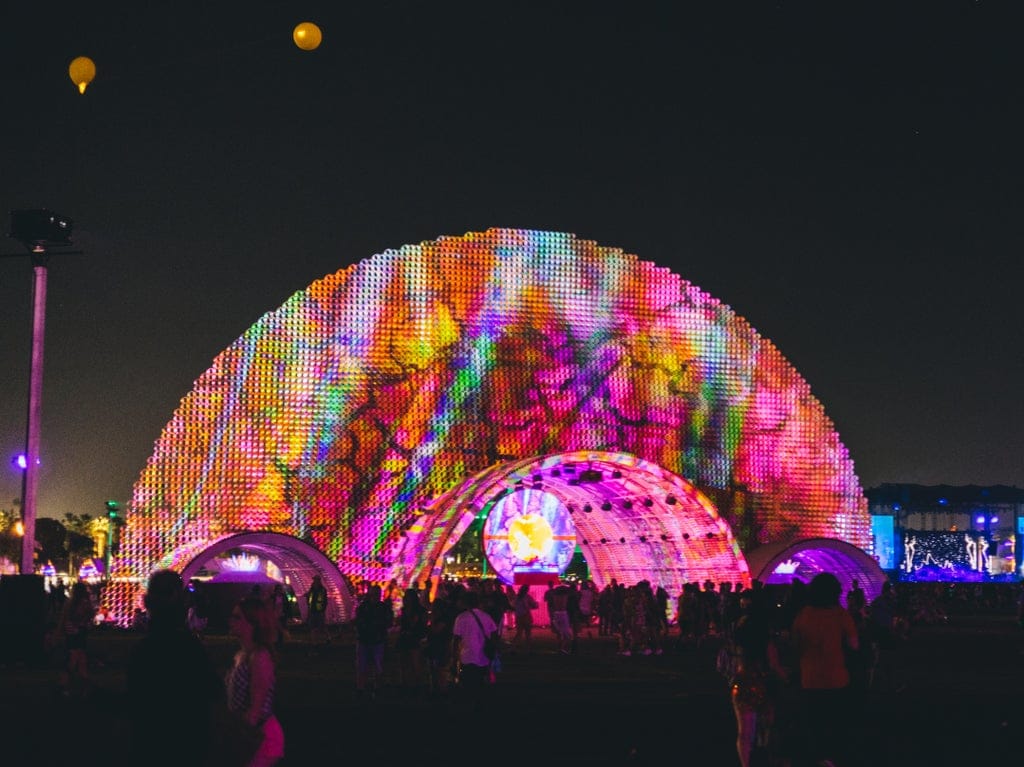 After a two-year absence, Coachella has made its highly anticipated return.

Located in Indio, California, the desert festival has gained popularity over the years for its glitzy Instagram-worthy dress code and major celebrity guest sightings.

The festival is set to start up again for its second weekend on 22 April, following a lively first three days a week ago.

Day three of the festival proved to be a memorable closer to the first weekend, with south London rapper Dave delighting fans when he invited a fan on stage to perform his 2016 hit single “Thiago Silva”. Hours later it emerged that the teenager – nicknamed “Spike from London” – was the son of Notting Hill Director Richard Curtis.

Elsewhere, The Weeknd sparked speculation when he played a voicenote, which many fans believe to be his ex-girlfriend and model Bella Hadid, during his headliner with Swedish House Mafia. A source close to the musician has denied that it was Hadid.

The events of day three followed a jam-packed Saturday (16 April) that featured sets from composer Danny Elfman, the oldest artist performing at this year’s youth-focused Coachella by some margin, and a farewell show from Brockhampton.

Billie Eilish-mania swept the site ahead of her performance on Saturday 16 April, following fellow headliner Harry Styles’s show on the first night, which included a surprise appearance from the queen of country herself, Shania Twain.

Find all the updates from this year’s festival below

Hello, and welcome back to the Coachella live blog, as we prepare for the second weekend of the California music festival.

As a refresher, here’s a rundown of the biggest talking points from Day 3 of the festival last Sunday…

Here’s a recap of the biggest talking points on Day 3 of the free-spirited, technicolour festival, before the tents go up again on 22 April:

Other highlights from day three of the Californian music festival included a special country music set from Orville Peck, and Finneas’s solo show

Catch up on the biggest talking points from Coachella Weekend 1.

Need a refresher on the biggest talking points from Coachella Day 1?

Now that Coachella’s first weekend has wrapped, take a look back at the festival’s biggest talking points.

Between Harry Styles’s Shania Twain guest appearance and Arcade Fire’s surprise return to the desert, here are 10 of the biggest things that happened on Day 1.

Other highlights of the day include additional surprise appearances from Justin Bieber and Snoop Dogg.

The Norwegian DJ had initially purchased the billboards along the road to Coachella to promote his new music.

However, with the ongoing war, he felt it would be more meaningful to use them to highlight Music Saves UA, an organization providing relief to those in need in Ukraine.

“Those days of freedom are sadly gone for them, and now bombs rain down on their cities,” the DJ said.

In news that’ll surprise some, the “flashiest rock show of the weekend” came from none other than Doja Cat.

The teenager – who took to the stage with south London rapper Dave – has since been identified as the son of director Richard Curtis.

Writer and activist Scarlett Curtis took to Twitter to commend her brother Spike for the performance.

One of the biggest talking points to emerge out of The Weeknd’s headline performance this weekend concerns a voicenote that the musician played during his set last night (17 April).

“Hey, it’s me. I know it’s been a while but I was just thinking about you and I’m sorry about everything,” a woman was heard saying.

Some fans believe that it was a voicemail from The Weeknd’s ex-girlfriend, model Bella Hadid. Others, however, are less convinced.

Dave brings on ‘Spike from London’ to perform ‘Thiago Silva’

In case you missed it, there’s a new “Alex from Glasto” in town.

During his Coachella set on Sunday (17 April), Dave invited an audience member – “Spike from London” – to join him on stage for his performance of the 2016 hit single “Thiago Silva”.

Video footage of the moment went viral on social media at the time, with the original BBC YouTube view count now comfortably over 30 million.

Footage has emerged on social media showing The Weeknd changing the lyrics of his 2016 song “Party Monster” on stage.

Anitta performed at day one of Coachella alongside Saweetie.