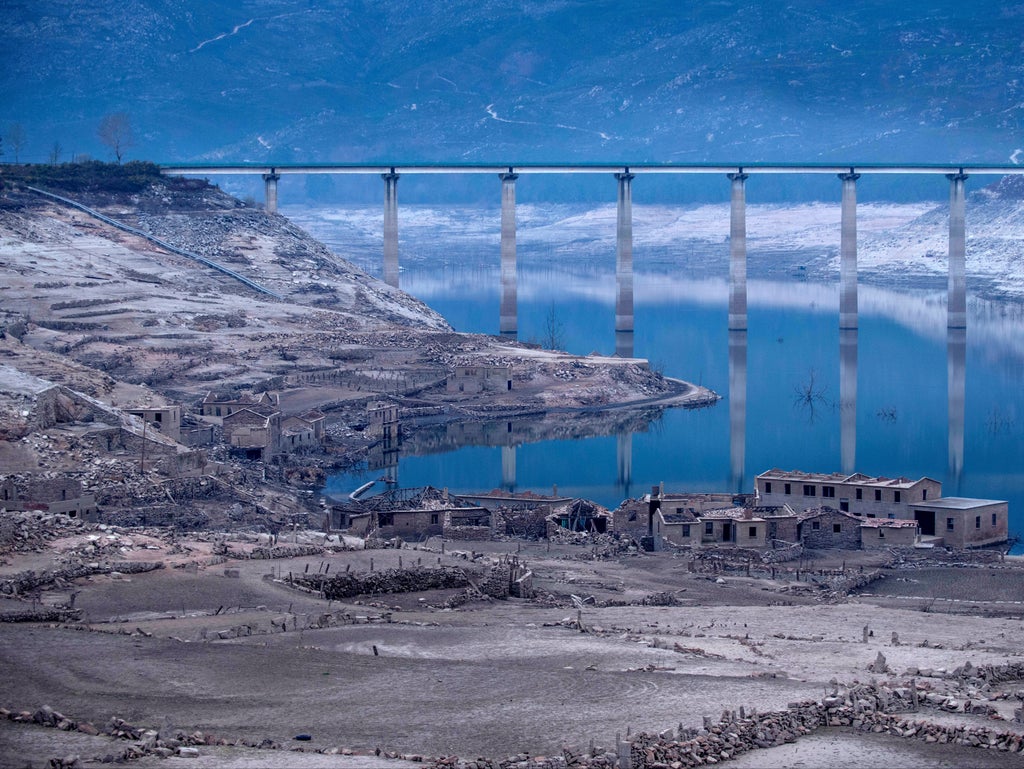 In north-western Spain, the sight of roofs emerging from the surface of the water in the Lindoso reservoir is not uncommon at the height of particularly dry summers, but since the lake was first created three decades ago, this winter is the first time the flooded village of Aceredo has been revealed in its entirety.

The decrepit old stone works of the village are an indication of the extent of the severe winter drought impacting Spain and Portugal, which is now devastating crops after more than two months with no rain.

While 10 per cent of Spain has officially been declared as being under “prolonged drought,” large areas outside this categorization, particularly in the south, also face extreme shortages that could impact the irrigation of crops.

Overall around 50 per cent of all Spanish farms are believed to be at risk due to the record low rainfall which is impacting rain-fed crops including cereals, olives, nuts and vineyards, which could lose 6 per cent to 8 per cent of their production , Spanish farming organizations have warned.

While the government is planning to spend around €570m (£477m) to improve irrigation systems, the lack of rainfall has been blamed on the worsening climate crisis.

Over the last three months of 2021, Spain recorded just 35 per cent of the average rainfall it had during the same period from 1981 to 2010. But there has been almost no rain since then.

IPMA climatologist Vanda Pires, Portugal told AP the agency had recorded an increase in the frequency of droughts over the past 20 to 30 years, with lower rainfall and higher temperatures.

“It’s part of the context of climate change,” she said.

Scientists estimate that Portugal will see a drop in average annual rainfall from 20 per cent to 40 per cent by the end of the century.

According to the Spain’s national weather agency AEMET, only in 2005 has there been a January with almost no rain in this century.

If there is not significant rain within the next two weeks, emergency subsidies for farmers will be needed, Spanish authorities told AP.

Rubén del Campo, a spokesman for the Spanish weather service, said the below-average rainfall over the last six months was likely to continue for several more weeks, with hopes that spring will bring much-needed rainfall.

Spanish Agriculture Minister Luis Planas said last week the government would take emergency action if it did not rain in two weeks – likely to be financial support measures for farmers to alleviate the loss of crops and revenues.