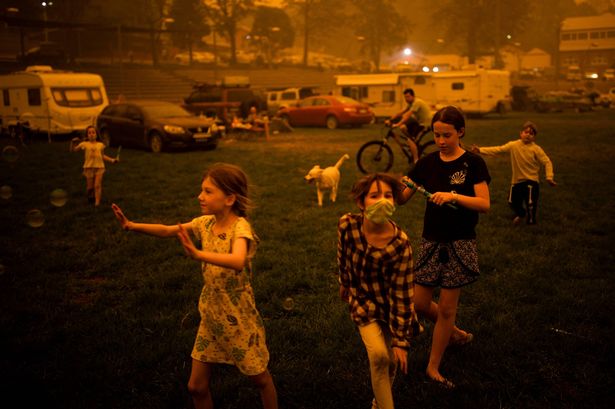 Billions of people are suffering from the effects of climate change and many of the impacts of the crisis are now simply “irreversible”, a landmark report warns.

The UN’s Intergovernmental Panel on Climate Change (IPCC), is the most devastating official assessment so far of the effects of global warming on people and the planet.

It says that humans and nature are being pushed beyond their abilities to adapt, with over 40% of the world’s population are “highly vulnerable” to climate, the sombre study finds.

But there’s hope that if the rise in temperatures is kept below 1.5C, it would reduce projected losses.

For the first time the IPCC states that climate change is contributing to humanitarian crises as weather extremes are increasingly driving displacement in every region of the world.

It also warns that droughts, floods and heatwaves will increase in frequency and intensity, with devastating consequences, and all parts of the globe will be affected.

People and ecosystems least able to cope are already being hardest hit, while their vulnerability is set to increase if global temperatures and carbon emissions are allowed to increase above 1.5 degrees, it adds.

“This report is a dire warning about the consequences of inaction,” said IPCC chair Dr Hoesung Lee. “It shows climate change is a serious and mounting threat to our wellbeing and a healthy planet. Our actions today will shape how people adapt and nature responds to increasing climate risks.”

The rise in weather and climate extremes driven by human activities including use of fossil fuels “has led to some irreversible impacts as natural and human systems are pushed beyond their ability to adapt”, the IPCC concludes. Farmers across the tropics are reaching their limits of adaptation to current climate impacts.

“Approximately 3.3 to 3.6 billion people live in contexts that are highly vulnerable to climate change”, with large cities on coastlines most in danger, it adds, while some measures to prepare for inevitable impacts are actually heightening risk.

Maintaining the resilience of biodiversity and “ecosystem services” – provided by nature – at a global scale “depends on effective and equitable conservation of approximately 30-50 per cent of Earth’s land, freshwater and ocean areas, including currently near-natural ecosystems”, the report by 270 leading scientists finds.

The assessment is the second in a series of three reports from the IPCC in the latest review of climate science, which take place every six or seven years for governments.

Talks over the weekend overran, with international officials and scientists working to finalize the wording as they went line by line through the 40-page report, which will be presented to governments around the world.

It comes a little over 100 days after the Cop26 summit agreed to increase action to try and limit global warming to 1.5C (2.7F) to avoid the worst impacts of climate change.

Firefighters use a water hose to extinguish a forest fire in Gonfaron, France
(

It also warns that it is late to reverse some of the effects. “Some options for climate resilient development have already been forfeited due to past societal choices,” it said, describing a “rapidly closing window of opportunity to secure a livable and sustainable future for all”.

Russia, Saudi Arabia and India repeatedly objected to the negative tone of the report. “They are delaying everything whenever they can,” a source close to the discussions said. “Russia in particular is trying to emphasize any benefit from global warming and trying to remove mention of climate impacts caused by human activities.”

Ukrainian scientists left the discussions on Thursday as the crisis in their country escalated.

“If you wanted some good news for a change, look away now. This latest report from the IPCC provides an even more alarming synthesis of past, current and future climate risks than previous iterations. The loss and damage already being caused by climate change is writ large, as is the cascade of intensifying impacts we can all expect to endure in the coming years, decades and centuries.

“Like taking a wrecking ball to a set of global dominoes, climate change in the 21st century threatens to destroy the foundations of food and water security, smash onwards through the fragile structures of human and ecosystem health, and ultimately to shake the very pillars of human civilisation.

“There is still time to slow down the wrecking ball, to nudge it away from the most catastrophic path, but with this, the IPCC’s Sixth Assessment of Climate Change Impacts, Adaptation and Vulnerability, it’s clear

Kate Blagojevic, Head of Climate at Greenpeace UK said: Climate change isn’t just a timebomb we’re setting for future generations, it can be documented right now in the lives and livelihoods lost and in irreparable damage caused to our natural world. Industrialized nations owe the means to take real action to those communities already staring down the barrel of this crisis.

“The UK government must use the rest of our year as COP President to push the global community to answer the call for action this report is sounding. It’s time to stop and reverse deforestation and commit to protecting 30% of our oceans by 2030. We have to accelerate renewable energy and plough forward with energy efficiency measures.

“And we must reduce meat and dairy consumption in high-consuming countries like the UK. It also means recognition and financial support for the loss and damage already being faced by so many communities on the front line of the climate crisis.”

Kyle Lischak, ClientEarth lawyer and head of UK, said: “This IPCC report is another blunt reminder that COP26 in Glasgow last year was not a job done. The UK Government must not shy away now, but instead work with even more urgency with other governments and the private sector to deliver more ambition and more action.

“The carbon budget clock is ticking, and the UK Government needs to show that its proposed measures will deliver the necessary emissions cuts. As the Climate Change Committee has advised, there is scope for much stronger policy on insulating homes, supporting sustainable transport, promoting climate-friendly food and farming, moving to a low-waste economy, and managing aviation emissions.

“This report was commissioned by the world’s governments, who have now signed off on the conclusions. Let’s hope they act on it, as the conclusions are shockingly grim.

“That farmers across the tropics are reaching their limits of adaptation to current climate impacts is alarming. As is the statistic that 4 in 10 people are highly vulnerable to climate change*.

“Investments and interlocking policies are needed to halve carbon dioxide emissions this decade and invest in adapting societies to the new reality we face of increased heatwaves, extreme rainfall events and droughts that climate change is bringing.

“Slashing emissions and investing in making societies resilient to climate impacts could put the world on a sustainable footing. But where are the policies to show that countries at taking this existential threat to human civilization seriously? Countries have a record of decades of climate inaction. Governments need to step up and act fast.”