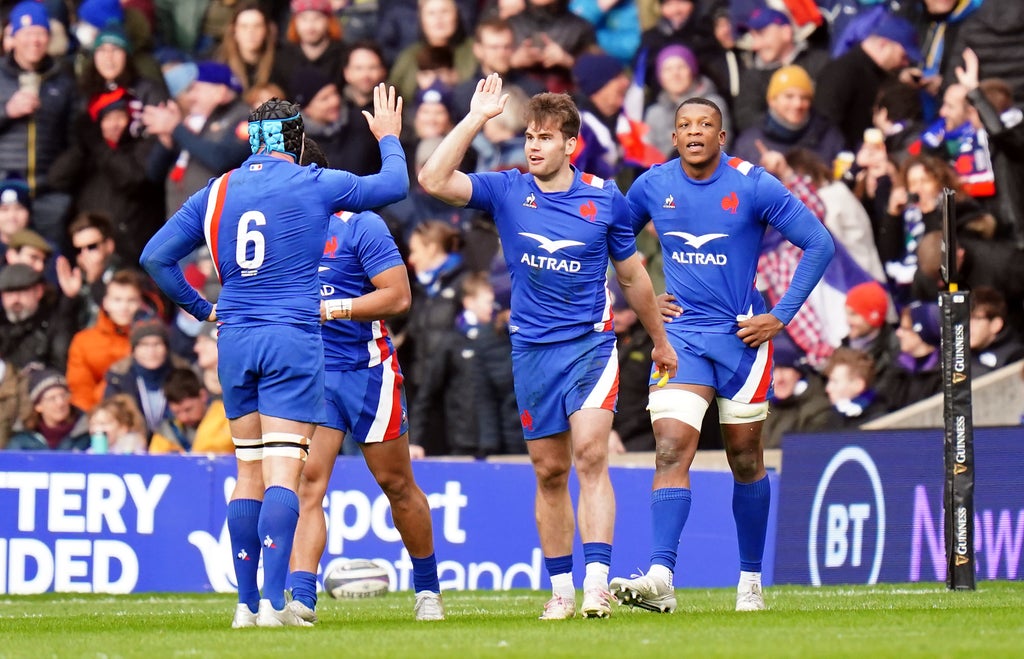 Rampant France remain on course for the Grand Slam after cruising to a six-try 36-17 destruction of Scotland in Saturday’s Six Nations clash at Murrayfield.

Les Bleus took command early on with a couple of magnificent tries by Paul Willemse and Yoram Moefana.

Scotland responded in spirited fashion and looked to be right back in the match when Rory Darge marked his first international start by touching down just before the half-hour mark to bring the hosts within two points.

A try by Gael Fickou right at the end of the first half gave France breathing space once more before further scores from Jonathan Danty and Damian Penaud (twice) after the break ensured a chastening afternoon for the hosts.

Scotland head coach Gregor Townsend, already without Jamie Ritchie, Rory Sutherland, Matt Fagerson and Jonny Gray through injury, lost another key man on the eve of the game after Hamish Watson tested positive for coronavirus. His place of him in the XV was taken by Nick Haining, with Andy Christie added to the replacements.

France, backed by a large traveling support on a pleasant late-February afternoon, had Danty back from injury in the only change to the XV that started the victory over Ireland a fortnight previously.

Les Bleus had a great chance to get on the scoreboard in the sixth minute when they won a penalty right in front of the posts, but Melvyn Jimenet was surprisingly off target with what looked like a routine kick.

The breakthrough came for the visitors just two minutes later, however, when Willemse touched down at the end of a scintillating attack down the left flank led by Captain Antoine Dupont. This time Jaminet made no mistake with his kick from him.

Finn Russell got Scotland off the mark in the 11th minute with a penalty from right in front of the posts after France were penalized for offside.

But within two minutes the French stretched their advantage with another excellent try when Moefana went over the line after an offload by Cyril Baille, who did superbly to keep the attack alive. Jaminet’s conversion attempt, from a tight angle wide on the right, drifted the wrong side of the posts.

The Scots enjoyed a good spell of pressure and Ali Price thought he had forced the ball down for a try in the 28th minute but the French were deemed to have kept the ball up after a TMO review.

The hosts were not denied though. Within seconds of play resuming just in front of the French try-line, Darge darted over after being played in by Price. Russell was successful with the conversion.

Just as Scotland looked like they were gaining the initiative, Fickou extended the French lead in the last action of the first half with a stunning individual drive over the line, which was converted by Jaminet.

Things got worse for the home side two minutes into the second half when a kick downfield bounced kindly back into the path of Danty and left him with a free run at the line. Jaminet once again added the extras.

This seemed to knock the stuffing out of Scotland and France added a fifth try just before the hour when Penaud went over on the right. Jaminet missed his conversion.

Penaud then scored his second try of the match when he ran on to a crossfield kick from Romain Ntamack in the 74th minute, with the conversion attempt again unsuccessful.

Scotland got a late consolation when Duhan van der Merwe went over the line but it was too little, too late on a day when they were emphatically outclassed.