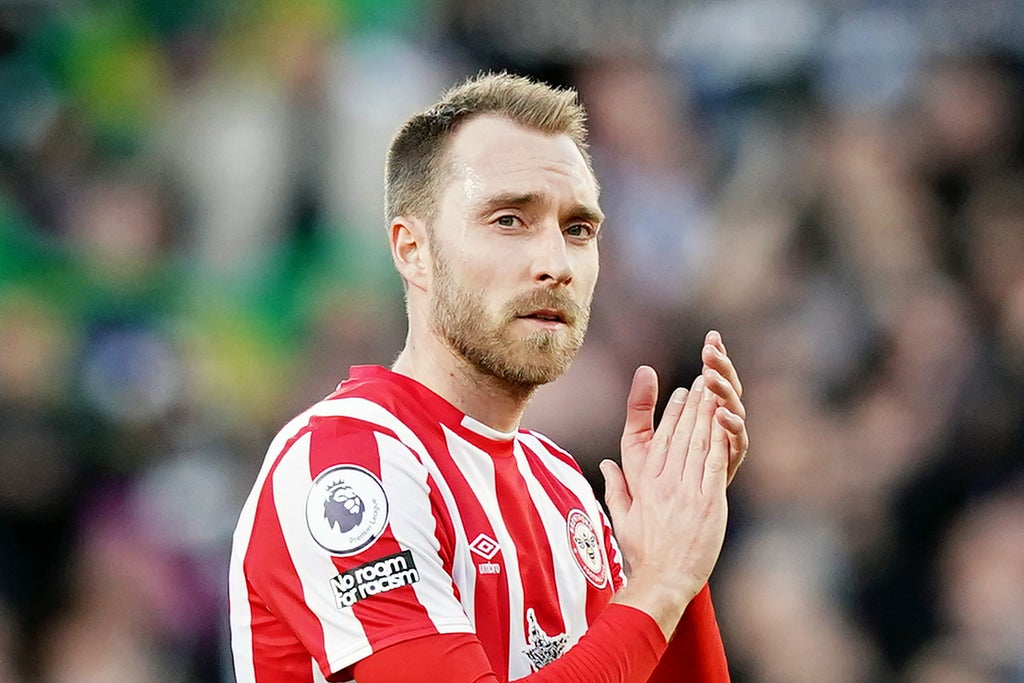 With just over 52 minutes played in sunlit west London, as Brentford’s 10 men reckoned with a 2-0 defeat that will have huge implications on their Premier League survival, Christian Eriksen emerged from the shadow that has dominated the past eight months of his life. If the horrifying images of his collapse last summer had already been banished from Eriksen’s own mind, they remained intact for those who were fortunate enough to witness the midfielder’s return here. This was a moment that was impossible to envisage then, when the unimportance of a football match was thrust so jarringly into perspective, and felt no less astonishing now as Eriksen ran onto the pitch and past the memories that threatened to define him.

Amid all the emotion around his return, there remained a residual sense of apprehension that couldn’t be extinguished until this moment. There is still the small defibrillator fitted in Eriksen’s chest as a permanent assurance. He unwillingly represents the innate fear hidden within all of us that the lives we build can be upended at a moment’s notice – a fact that could hardly be more pronounced in the world right now. And it is a beautiful contradiction that while football can be so utterly irrelevant, here it also represented such a meaningful escape. Each time the ball arrived at Eriksen’s feet from him, with his presence from him alone restoring an urgency to Brentford’s ailing attack, it was no longer about miracles but simply the stakes of the match-the normality he had craved most of all.

And yet, the narrative arcs of sport, no matter how much we will them into existence, remain much like life. There are no assurances that the heroes or underdogs will prevail. And although Eriksen’s appearance will be the abiding memory of this afternoon, he alone could not stir the sort of comeback Brentford so desperately required.

In truth, their fate had been written inside the opening 10 minutes, when Josh Dasilva was sent off, and it was sealed before the half-time whistle by goals from Joelinton and Joe Willock. Newcastle were the villain of the piece but deserving winners. This was their fourth victory in five league games and the Saudi-backed juggernaut is motoring away from the relegation zone thanks to Eddie Howe’s sound footballing fundamentals and a source of fuel that provides plenty of moral ambiguity.

And while Eriksen’s return marked a momentous occasion, the onus is now clearly on him to arrest Brentford’s slide. They have been a blunt force since the turn of the year, with Ivan Toney’s absence compounding a winless run that’s plunged them into the throes of a relegation battle, and this result means they have now lost seven of their last eight league games.

It is hard to be overly critical of today’s evidence, even if it is part of a wider malaise, such was the misfortune of Dasilva’s early sending off. The midfielder’s stamp on Matt Targett’s ankle was purely accidental and possessed little spite, with Mike Dean initially awarding the free-kick in Brentford’s favour. However, the slow-motion replays revealed a far more reckless image, with Targett fortunately to avoid a serious ankle injury, and Dasilva offered no argument as his dismissal of him altered the complexion of this game irreversibly.

It wasn’t long before Newcastle’s pressure began to tell, with Ryan Fraser constantly wreaking havoc down the left-wing as Kristoffer Ajer struggled as a makeshift full-back. It was the Scot’s chipped cross that brought the first clear chance, with David Raya diving well to his left to parry away Chris Wood’s header, and from thereon Brentford’s box was under almost constant siege. It was very much an aerial assault, with crosses fired into Wood and Joelinton, and it was the latter who gave Newcastle their overdue lead with a powerful header after 33 minutes. The Brazilian has become an unlikely hero in Howe’s side, dropped into their industrial and increasingly effective midfield axis, and he burnished that cult status by sprinting the full length of the pitch to celebrate in front of Newcastle’s traveling fans.

The breakthrough did little to ease the one-sidedness, with Raya making another fine save to deny Fraser before Jonjo Shelvey’s shot skimmed just over the crossbar, and there was little surprise when Newcastle doubled their lead on the cusp of half-time. Brentford earned a rare sighting of goal from a corner but were punished instantly on the counter-attack, as Fabian Schar masqueraded as a roving midfielder and played Willock through on goal with surprising deftness. After waiting 25 league games for his first goal of the season at West Ham last week, Willock curled the ball past Raya nonchalantly and condemned Brentford to their misery.

Their impetus did wane after the break, and Eriksen’s introduction galvanized Brentford’s play, but there were few moments when they truly threatened to mount a comeback. Christian Norgaard’s curling shot fizzed just over the crossbar but it was Newcastle who looked more likely to extend their lead. Willock’s whipped shot drifted past the far post and Targett’s drive forced another alert save from Raya and Brentford’s only shot on target arrived deep into stoppage time as Vitaly Janelt fired straight at Martin Dubravka’s chest.

It remains an afternoon that will be remembered for Eriksen’s unlikely and stirring return, and for all that he relishes being able to move on, he will harbor few illusions over the size of the task at hand.