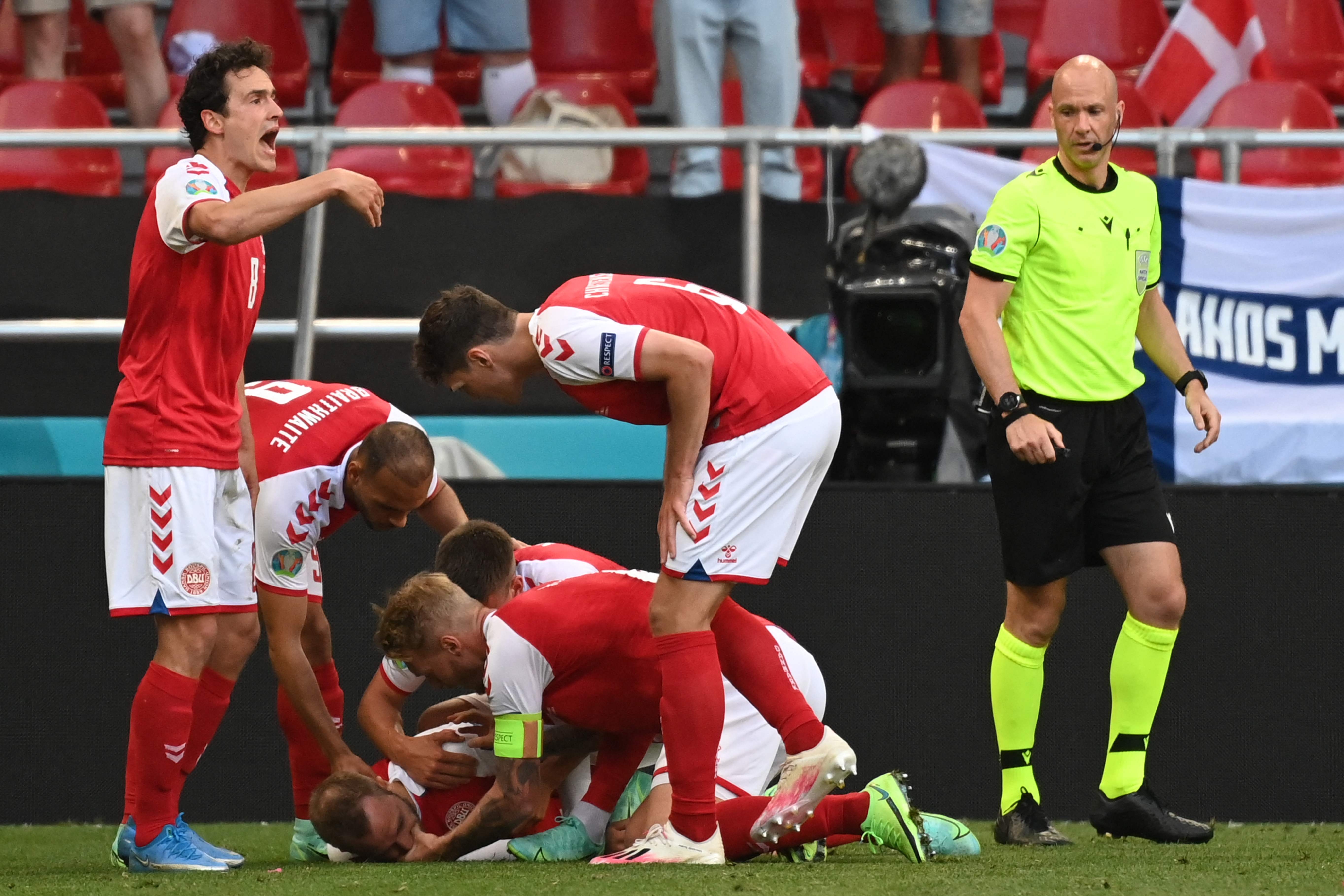 Christian Eriksen has once again put his heart to the test. Armed with an implantable cardiovascular defibrillator like someone clinging to a life preserver, the 29-year-old Denmark’s biggest soccer star is so tempted by the idea of ​​returning to competition that he seems willing to forget that last June 12 he remained clinically dead on the grass of the Parken in Copenhagen after suffering a cardiac arrest when he played the Denmark-Finland of the European Football Championship.

It took five minutes for medics to revive him as he lay helpless before the horrified crowd. This Thursday, six months after the syncope, Eriksen reported that he trains in the field of Odense, the club where he began his youth career. The first public message from the great Danish football star points in the direction that his surroundings have pointed out for weeks. He wants to sign for a club that allows him to resume his professional career. The endeavor has sparked an intense medical and legal debate that places cardiologists at the center of the scene.

“Although it pains us to say it, Eriksen is not a healthy person,” says Araceli Boraita, head of the cardiology service at the Center for Sports Medicine, attached to the CSD. “He is sick. Nobody who is healthy suffers a sudden death and he has been lucky enough to be revived. Putting yourself back in a situation of exhaustion, of adrenaline rush, of strong emotion, is going to produce adrenaline surges that will expose you to a risk ”.

Although it pains us to say so, Eriksen is not a healthy person. No one who is healthy suffers a sudden death and he has been lucky enough to be resuscitated

Araceli Boraita, head of the cardiology service of the Sports Medicine Center, attached to the CSD

Eriksen has not spoken publicly since. His friends insist that he intends to play football at the highest level and that Ajax is among his most credible destinations, given that in the Netherlands there are not so many medical or legal restrictions for athletes who decide to continue competing with a defibrillator. Asked about it, the player’s agent, Martin Schoots, does not respond. The doctors who treated him are also substantially silent. If there is a diagnosis that explains the cause of his cardiac arrest, those who examined him after the accident have not revealed it. Officially, there is no pathology.

“We really don’t know what happened to Eriksen,” says Enrico Castellacci, president of the Italian Football Club Physicians Association. “One thing is certain: if they have put a subcutaneous defibrillator the boy is at risk of suffering another crisis.”

The position of the Italian cardiologists was decisive for Inter Milan, the club that hired him in 2020, to inform Eriksen that they would not allow him to compete under their shield. In the memory of the Serie A clubs, the death of Fiorentina captain Davide Astori in 2018, the origin of an investigation that culminated in the conviction of the team doctor for negligence weighs heavily. “From a legal point of view, Italy is different from other countries,” says Castellacci. “Here the law imposes the agonistic examination to authorize the athlete to practice sport. The protocol is rigid. Once you pass the test, legally it is the doctor who assumes all responsibility. In northern Europe, the suitability tests are not legally foreseen and sometimes the responsibility is assumed by the player himself, who signs a document releasing the doctor’s responsibility. This in Italy is not possible. Doctors here think so much about it that they often don’t issue the certificate. That happens to Eriksen. Maybe in Holland or Denmark they will give you the suitability. In Italy I could hardly have it ”.

“The subcutaneous defibrillator in a contact game like football is another unknown,” concludes Castellacci. “The footballer is always exposed to a kick, a blow, an elbow. This can compromise the device that you have under the skin and then it may not work and it will not defibrillate in the event of a heart attack ”.

The subcutaneous defibrillator in a contact game like football is another unknown. The footballer is always exposed to a kick, a blow, an elbow …

Araceli Boraita is just as skeptical: “Even though he thinks he has a device that will save his life if he has an arrhythmia … You can have one arrhythmia after another and the device shocks and shocks, and you can even die being treated. The defibrillator is not a mechanism that exists to return to play but to protect you in your daily life ”.

Member of the European Society of Cardiology and a leading Spanish expert in heart physiology in the world of football, Luis Serratosa indicates that the latest generation of defibrillators offers Eriksen hope. “It depends on the type of defibrillator,” he observes. “Today solutions can be found. It can be put on the right, under the armpit, in a less exposed area. And you can put defibrillator protectors. But it is true that it is still a thing that you have on your chest. There are people who take it well and people who don’t.

Serratosa recalls that since 2015 in the United States, sports cardiologists began to favorably consider the safety of defibrillators implanted in athletes, provided that minimum conditions were met. “We must rule out that Eriksen has any disease of the heart muscle,” he says, “some cardiomyopathy, like the one that Antonio Puerta suffered from. They will have done imaging tests. He came from Tottenham, where he had been monitored by Sanjey Sharma, one of the world’s leading experts in sports cardiology. If Sanjey saw him, he had nothing until 2020 when he signed for Inter. This may suggest that what has caused the arrhythmia may be something very hidden that could cause some type of electrical disorder ”.

“If it is an electrical illness, you can put a defibrillator on him and we can discuss if he can continue to compete. But I do not think that in Spain it is clear that the doctor is exempted from responsibility in the event of death. Although the athlete signs it

Luis Serratosa, physiologist specialized in the heart with 20 years of experience in elite football

“If it is an electrical disease, you can put a defibrillator on him and we can discuss whether he can continue competing,” says Serratosa. “But I do not think that in Spain it is clear that the doctor is exempted from responsibility in the event of death. Although the athlete signs it. In the United States this is common, and even some athletes who have been prohibited from competing have sued the doctor, appealing to the constitution. In Europe I know the cases of Daley Blind in Ajax and Anthony van Loo in the Belgian League, who have played with defibrillators. Van Loo has heart disease, and suddenly he suffered an arrhythmia, the defibrillator gave him a shock, he retired, he rested for a while … And so he continued playing for several years ”.

Technological evolution works in favor of the daring. In 2017, Yale University published the first part of the study carried out in 393 athletes with a defibrillator, most of them competitors in the university leagues. 30% had suffered a severe arrhythmia or defibrillation before implantation, and the report showed that between 2010 and 2017 there were no deaths, no defibrillation failures, or arrhythmia-related injuries or shocks during the practice of sport. “There were 46 cases of athletes who received a shock defibrillator during competition or training, 3% per year, “said the report. “The number of shocks registered during the competition were not higher than those registered during other activities ”.

Rafael Ramos, who was president of the Spanish Association of Football Team Physicians, underlines the economic issue: “Here the final responsibility for any situation lies with the labor mutual. In case of withdrawal, he only pays the maximum that a football worker can charge, and it is not more than 3,000 euros ”.

“What I see as difficult”, Serratosa judges, “is for Eriksen to find a club that wants to pay him what he asks for with regular insurance. Because how is the risk percentage established? “

Christian Eriksen has done the math. He wants to be the one who decides when to retire from football even if it costs him another syncope.