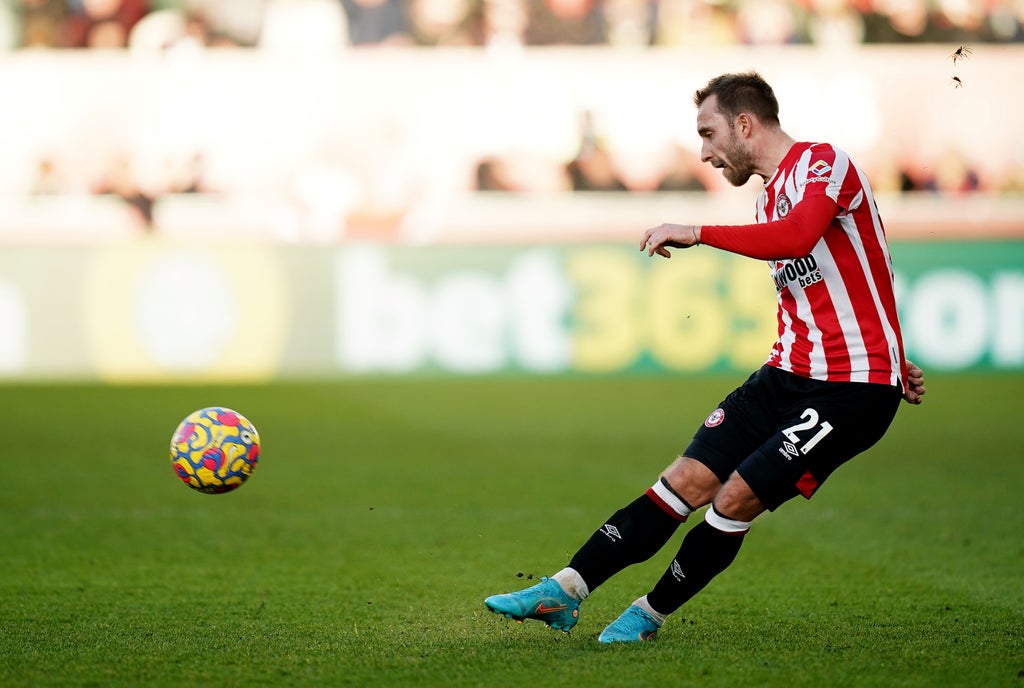 Thomas Frank is convinced Christian Eriksen will help steer Brentford clear of relegation after the midfielder completed his emotional return to football.

The former Tottenham and Inter Milan star received a huge ovation as he came off the bench in the 52nd minute, 259 days after suffering a cardiac arrest on the pitch during Denmark’s Euro 2020 match against Finland.

The 30-year-old was unable to prevent Brentford being dragged further into Premier League relegation trouble following a 2-0 defeat by Newcastle.

But the very fact Eriksen, who revealed he had “died for five minutes” at the Parken Stadion, stepped on the pitch at all was reason enough to celebrate.

Eriksen was quick to get involved with his usual neat touches and the occasional incisive pass, but unfortunately the situation into which he was introduced was not likely to produce a fairytale with the Bees trailing 2-0 and down to 10 men.

None, Frank said: “I think for everyone in football it was a big moment.

“He got a big reception, from the Newcastle fans and all our fans, and it was big for Christian and his family.

“It was nice to see and hopefully now he can talk with his feet and speak only about football.

“I’ve been privileged to see him in training over the last three weeks, and you saw some glimpses of brilliance here, the balls in behind, some of the passing.

“I’m convinced 100 per cent he will help us going forward, He’s a top, top player and he’s going to add a lot of value to our team.”

There was a remarkable symmetry in the fact Eriksen came on as a substitute for Mathias Jensen, the Denmark team-mate who replaced him when he left the field stricken on that harrowing day in June last year.

Eriksen told Sky Sports: “If you take away the result, I’m one happy man. To go through what I’ve been through, being back is a wonderful feeling.

“Now I want to get the feeling and touch back, that football feeling, and then to help Brentford stay in the Premier League.”

Supporters all around the ground stood and applauded, as did the players from both teams, when Eriksen jogged on.

Magpies boss Eddie Howe said: “I’m very tunnel-visioned when I’m in game mode, but even I had to take myself away from that and stand back.

“Everyone is very thankful to see him back on a football pitch. It was very emotional for him and for Brentford, and it was really good to see our players share in that.”

It was an incident involving another Bees midfielder, Josh Dasilva, which ruined the match for Brentford.

After just 11 minutes Dasilva attempted to shield the ball only to plant his foot halfway up Matt Targett’s shin, and after a check on the monitor referee Mike Dean showed a straight red card.

The initiative was firmly with Newcastle and they took the lead in the 33rd minute through a header from Joelinton.

Joe Willock then grabbed his second goal in two matches when he applied the finish to a counter-attack from a Brentford corner.

“I was really pleased with our response to the red card because that doesn’t guarantee you anything,” added Howe, whose side are now above Brentford in the table.

“It was about our quality and ability to break them down and the first goal was hugely important.

“We have to remain very focused and not get carried away. We have to guard against complacency and do everything we can to improve. There’s no sense that we have achieved our goal yet.”