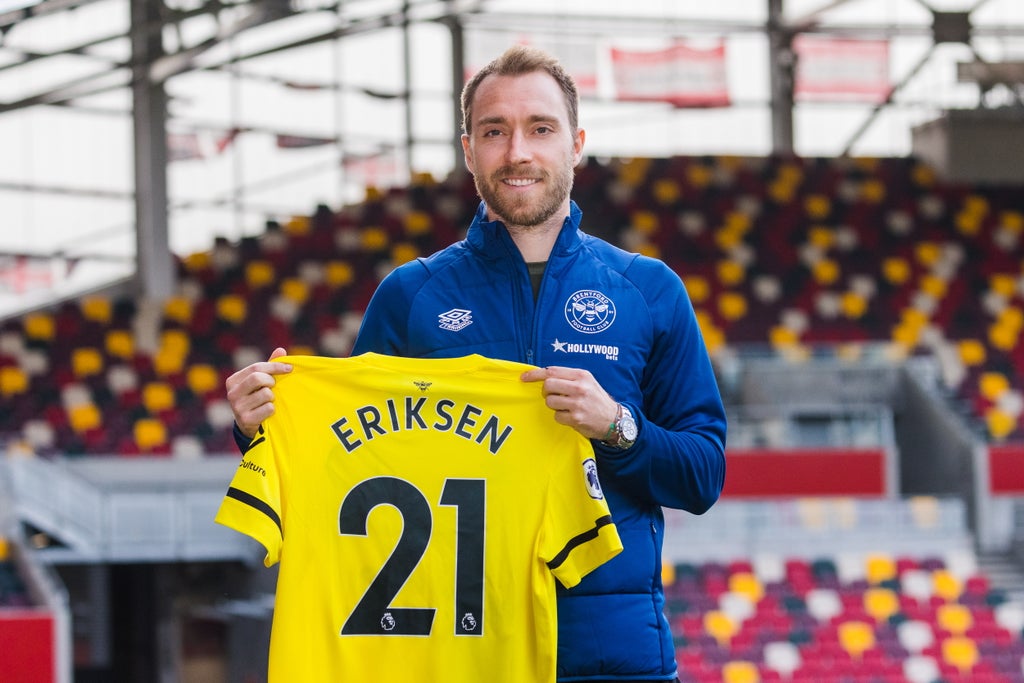 Life has a singular end, careers have many. But even after delaying the former after collapsing on 12 June 2021 in Denmark’s opening match of Euro2020, the latter seemingly only had one way to go for Christian Eriksen.

Eriksen was “gone” for five minutes when he had suffered a cardiac arrest in the 41st minute in Denmark’s Euro2020 opener against Finland in Copenhagen. On the way to the hospital where he would recover, he informed the paramedics in the ambulance they were welcome to keep his boots from him. He wouldn’t be needing them anymore. His fiancee of his, Sabrina, was told similar a few days later. A month on, professor Sanjay Sharma, cardiology advisor for the English Institute of Sport – and previously doctor at Eriksen’s former club Tottenham Hotspur – doubted whether he’d play football again.

So to see him beaming at the front of the press conference room within the Brentford Community Stadium was a sight to behold. A miracle, in Eriksen’s own words, and a triumph of human spirit and, of course, the endeavor of medical science.

The reason for Eriksen’s return is the implantable cardioverter defibrillator (ICD) embedded in the left side of his chest: a small electronic device connected to his heart to monitor its rhythm and even administer its own shock in case of emergency. Eriksen won’t be the first footballer to play with an ICD, but he is set to be the first to do so in the Premier League. Something not lost on him.

“I need to prove that you can play with an ICD,” he said. “If something that bad has happened, you can return to normal life afterwards. That is more motivation for me, to show I am capable of that.”

He sees it more as extra security rather than something keeping him alive, and even joked he has more protection than those probing him on his wellbeing. Indeed the only doubts are held by those around him who were deeply affected after watching his collapse. The only counseling he has undergone since he was with his family to help them overcome the trauma they have witnessed. “Of course, for them and for everyone it will be weird to see me playing. And for me it will be weird. They might have extra thoughts but in the end I’m here and healthy and playing.”

Eriksen, who turns 30 on Monday, has always been a phlegmatic soul. He is still eating and training as before. “The only thing that has changed is that I love my family more than before.”

No doubt his disposition is helped by the fact he has been around ICDs before. As a youngster, two of his teammates had implants, and former Ajax teammate Daley Blind has been playing with one since December 2019. “I’ve never seen it in use and it’s also something you don’t want to see but you’re lucky that it’s there to help. But I spoke to Daley a lot of times about everything; the rehab, the feeling, what it feels like with it and without it.”

Beyond the ICD’s primary function, it has also been a source of serendipity. Because while being the reason he has been able to return to the game, it is also why he finds himself back in London.

Prior to the incident, he had just about settled in Italy following seven years at Spurs. The early issues of breaking into the Inter Milan had been overcome, picking up a Series A title in the 2020/21 season. Language issues were slowly being overcome, and a close network established with family friend and Denmark teammate Simon Kjaer – who plays for AC Milan – living just 200m down the ground. Having signed a four-year-deal with Inter at the start of 2020, he was ready for the long haul.

That contract was terminated in December as Serie A prohibits players with ICDs. However, the Premier League does not. And after training with Ajax’s youth teams and his former club Odense, a call from Thomas Frank – who coached him in the Denmark age-groups – set in motion to return to the country he never intended to make.

“We really liked Milan as a city, Inter as a club and my football career was not in a place where I’m coming back to England anytime soon, at all. But you never know what happens in football. Things really happened very quickly. This was unexpected and now I’m here. It’s not like its bad to be back in England – nothing like that – it just wasn’t on my mind before.”

More fate was in the offing when he arrived at his hotel last Friday and immediately bumped into Antonio Conte – his former Inter boss now in charge at his former club Spurs. “He was the first man I saw when I walked out the taxi!” beamed Eriksen, all too aware of a universe conspiring its own way.

A return to north London has already been mooted, and once he is settled, he intends on catching up with his former teammates. But the path to the end of the six-month deal he has now only begun in earnest on Monday when he began training with the squad.

After an introduction from Frank prior to the session, Eriksen took the floor to address his new teammates, in part to say hello but also to encourage them not to approach him with kid gloves. “I said I’m here because everything has been cleared, if there are any questions you want to ask me, you can always ask me. Don’t go easy on me because if there was any concern I wouldn’t be here. I told them that from the beginning.”

By all accounts, they have not, and similarly, Eriksen has not wasted time mucking in. As the team went through walkthroughs ahead of last Wednesday’s visit to Manchester City, Eriksen watched on: soaking in the movements he’d soon be a part of, the set-plays he’ll no doubt influence and talk through it all with players who will soon be teammates.

Though no date has been set for a Brentford debut, the anticipation around the league is palpable. Eriksen’s departure was very much a loss for the neutral: the league suddenly one maverick wizard short, who was responsible for the best of an eminently watchable Spurs under Mauricio Pochettino. The only difference this time will be whether he sports the protective padding that other ICD footballers wear. That, ultimately, will come down to comfort.

“I hope they (opponents) treat me the same as everyone else because I am. I will be the same, as I told everyone at Brentford on the first day. I have been given the green light so I am 100% football. There is nothing else and that will be the same when I am on the pitch. I think it will take a few games or less and people will see there is nothing has changed. They don’t need to be worried about me as a person or a player.”

With 51 goals and 62 assists from 226 Premier League appearances (and, thankfully, counting), he intends to pick up where he left off. No change of style, no change of pace. Brentford, who sits 14th and are six points above the relegation zone after five defeats in a row, will need as close to his best for as much of the remaining 14 games as possible. And with one eye on Denmark’s squad for the World Cup later this year, the only rhythm Eriksen is concerned with is that on the pitch.