In just three decades, China has recorded the greatest economic advance in world history. Although South Korea recorded a similar growth rate during the previous 30 years, it possessed a much smaller population.

Exhibit 1 depicts how China’s per capita gross domestic product (GDP) growth has dwarfed that of the world’s biggest economy, the United States. The period begins in 1993, when the MSCI China Index commences, and concludes in 2020, the most recent year for which World Bank supplies the GDP data. 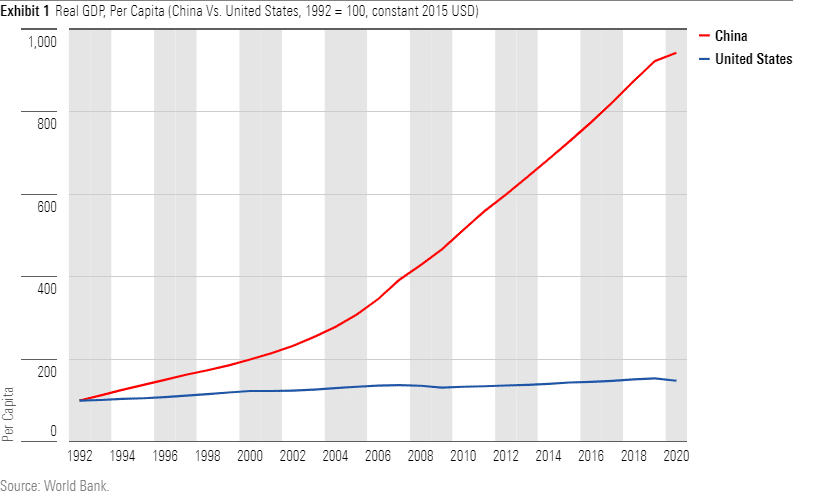 It’s not that the US fared badly. Its economy grew faster than did those of the other leading markets. Nor was the US especially sluggish by its own standards. At no time in American history – not in colonial times, nor the railroad era, nor its post-war glory days – has the US economy ever advanced at anything resembling China’s recent rate. The relevant story is not America’s decline, but China’s spectacular rise.

Setting each country’s 1992 production at 100 is useful for comparing subsequent movements. However, indexing the results obscures China’s initial poverty. It’s easy to forget how destitute China was just one generation ago. Expressed in 2015 US dollars, China’s per-capita GDP in 1993 was $1100 – one sixth of Chile’s output. Because of its size, China was not an economic backwater, but neither was it a major player. 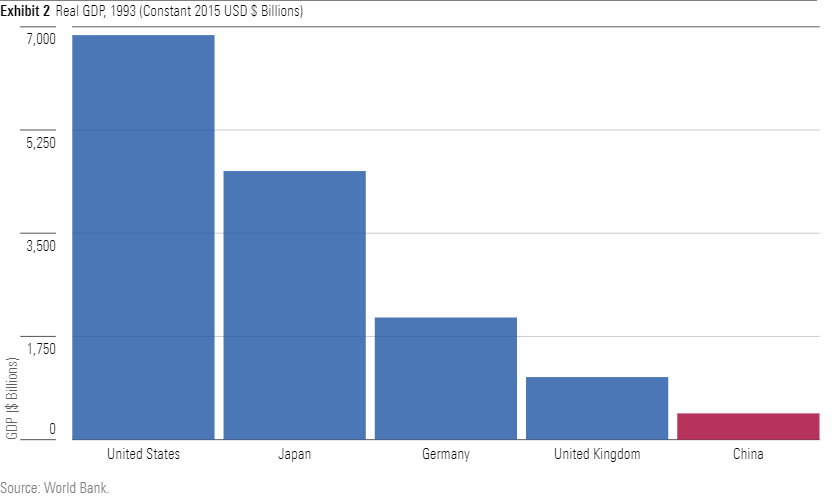 It’s no secret things are very different today. Whereas China in 1993 stood behind several other countries in challenging US dominance, today it rates as America’s only serious challenger. What’s more, given the two countries’ growth rates, China will overtake the US sometime around 2030, thereby becoming the world’s largest economy.

See also  Is there a game left that we can beat the machine? | Technology 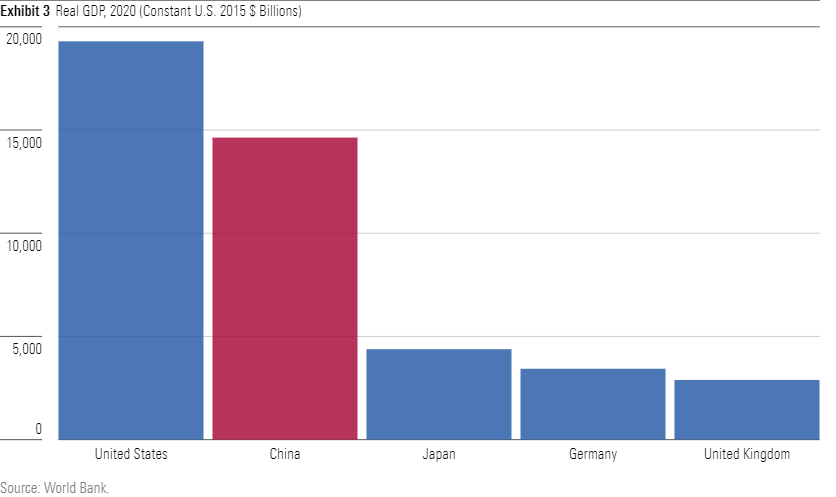 China’s economic development has surpassed almost all forecasts. One would think, therefore, that the country’s stock market, reopened after a 41-year hiatus in 1990 and tracked by an MSCI stock index since 1993, would have soared. After all, a tenfold expansion in national wealth should represent a huge opportunity.

Consider, for example, business fortunes in the US From 1993 through 2020, US GDP increased by 85%. During that time, the nation’s pre-tax corporate profits grew to $8.7 trillion from $2 trillion. Stripping out the effect of inflation shrinks the former figure to $4.9 trillion, but that still amounts to a 145% increase in company earnings, well above the economy’s growth rate. For every dollar of GDP expansion, American businesses accrued $1.70 of pre-tax profits.

The US stock market, of course, performed much better than that. For one, publicly traded equities pay dividends, so even if their shares had traded at the same price/earnings ratios in 2020 as in 1993, stock returns would have exceeded those companies’ income growth. For another, the stock market’s price/earnings ratio did not remain flat, but instead increased. For a third reason, some companies hiked their reported earnings by repurchasing their equity shares.

Given how American businesses leveraged their country’s modest economic growth by fattening their profits, and thus their stocks’ prices, the sky would have seemed to be the limit for Chinese equities. By the late 1990s, Wall Street strategists were pitching that idea. I vividly recall a 1998 speech at a financial advisers’ conference, counseling that they look to China. Their clients could begin by buying the shares of multinationals that operated in China, and later, they could invest directly in Chinese companies. I have received a standing ovation.

Bad advice, though. Since January 1 1993, as measured by MSCI’s index, Chinese stocks have trailed those of the other major economies. 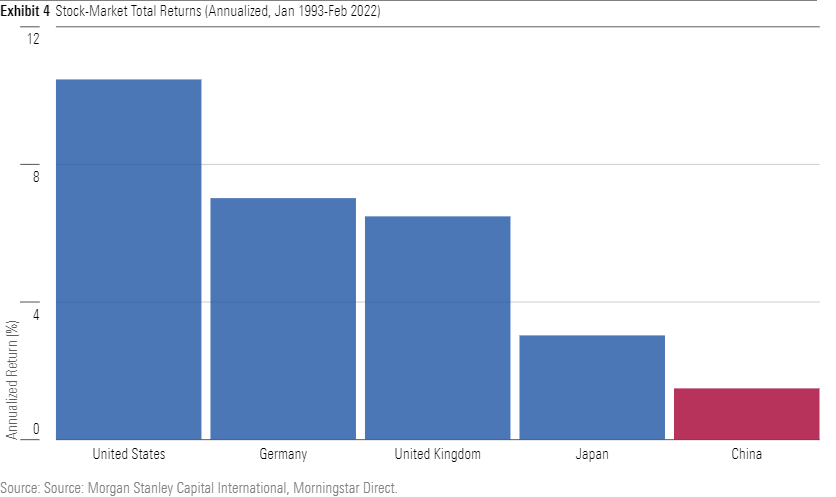 The outcome is even worse than first appears. After inflation, that nominal 1.5% annualized gain disappears entirely. Which means that this column’s headline is generous. In real terms, Chinese equities have not taken the road to nowhere: They have headed somewhere distinctly warmer, dropping 1.8 percentage points per year.

To be sure, measuring the results of Chinese stocks is tricky. As an emerging exchange, with various rules restricting the activities of foreign investors, China’s stock market poses challenges for indexers. One provider’s attempt at capturing the overall Chinese marketplace can differ substantially from another’s. For example, over that very same period, S&P/IFCI’s Chinese equity index gained 4.73% per year, a full 3 percentage points better than what MSCI reported.

While disturbing for those who expect uniformity from research organisations, that discrepancy is immaterial for this column. Whether Chinese equities have lost money in real terms, as MSCI’s numbers indicate, or have eked out a modest profit, as reported by S&P/IFCI, matters not. The key point is that, despite the country’s unprecedented economic boom, its stocks have flopped. Investors were better off owning US Treasury notes.

It should also be noted that, after an abysmal first decade, marred initially by the 1997 Asian financial crisis and then by the global 2000-02 stock-market downturn, Chinese equities performed well for almost 20 years.

But more recently, they have stumbled badly again, spooked by President Xi Jinping’s crackdown on entrepreneurs and by problems with China’s enormous – and crucially important – real estate market. This time, S&P’s figures agree with those of MSCI: Chinese stocks have shed 30% of their value over the past 12 months. 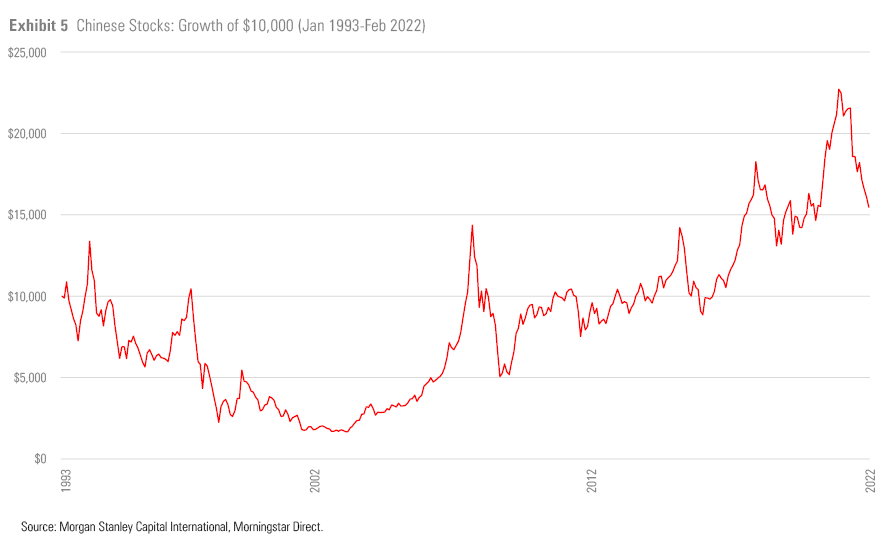 In short, Chinese equities have confounded reasonable expectations. Even those who dispute that general economic improvement leads to stock-market success might have granted an exception for China, given the extent of the country’s boom and its political stability. If so, they would have been mistaken. The critical question, of course, is why. Friday’s column will address that topic.

John Rekenthaler ([email protected]) has been researching the fund industry since 1988. He is now a columnist for Morningstar.com and a member of Morningstar’s investment research department. John is quick to point out that while Morningstar typically agrees with the views of the Rekenthaler Report, his views of him are his own