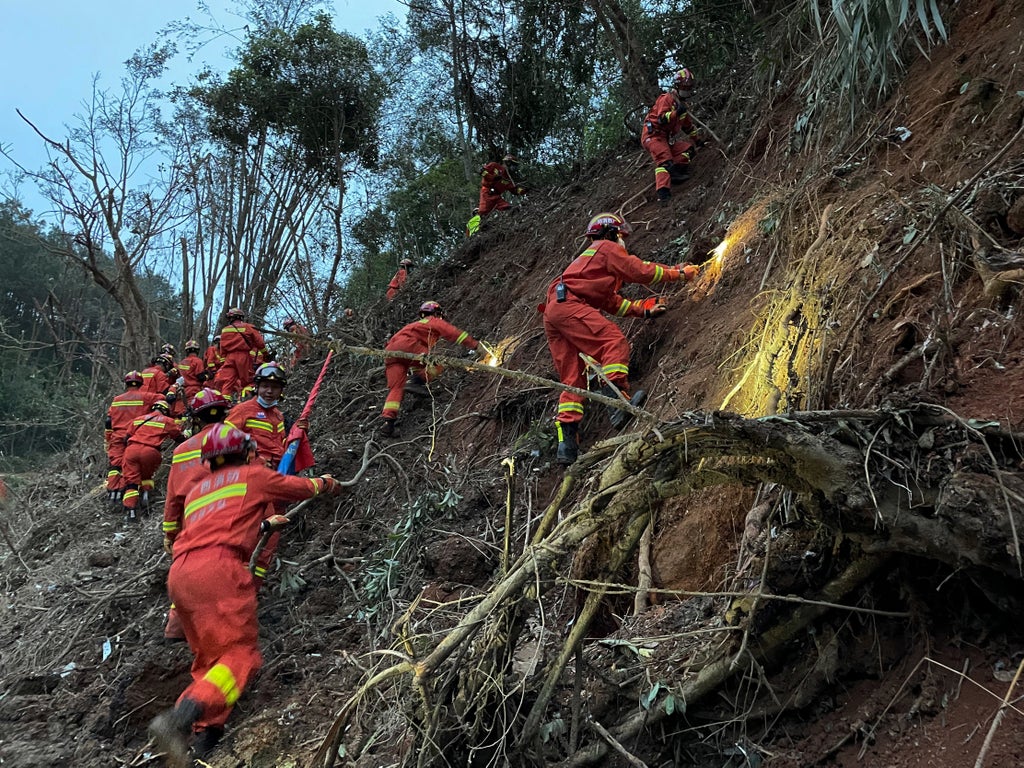 No survivors have been found after a plane carrying 132 people crashed in southern China, according to the country’s state broadcaster.

Rescuers continue to search for the wreckage of the China Eastern plane, which plummeted into hills in Guangxi province and exploded in flames yesterday afternoon.

A witness described seeing the jet nosedive and hit the ground – while another heard a bang “like thunder”.

It is one of the country’s worst air disasters in years.

Worried relatives have gathered at Baiyun Airport in Guangzhou, waiting for news.

One woman said six of her family members and friends had been on the flight. They were on the way to a funeral.

“I feel very anguished,” she said.

Smoke could be seen rising from a mountainside near the city of Wuzhou, Teng county after the Boeing 737-800 dropped 30,000ft in two minutes.

Rescue teams are scouring the slopes and hope to find the plane’s black box, which could help experts determine the cause of the crash.

Rescue operations were temporarily stopped due to rain on Wednesday. According to local media, so far no survivors have been found and the cause of the crash remains unclear.

China Eastern Airlines says it has reached out to the families of all 123 passengers who were onboard when the aircraft crashed on Monday.

That’s all from The Independent tonight.

We will bring you more on this tomorrow as we hear it.

Latest pictures from the search

The search continues in the hills of Guangxi.

No survivors have been found of the 132 onboard the Boeing 737-800 that crashed yesterday.

Rescue teams are hoping to find the plane’s black box, which could help experts determine the cause of the crash.

Sky News and CNN have been showing this footage that appears to show the China Eastern plane nosediving before crashing yesterday.

The footage was captured by a nearby CCTV camera, reports say.

The Boeing 737-800 airplane model had an “excellent safety record” according to the Flight Safety Foundation (FSH).

It has been involved in 22 major accidents and killed 612 people.

“There are thousands of them around the world. It’s certainly had an excellent safety record,” FSH president Hassan Shahidi said of the 737-800.

China will lead the investigation into yesterday’s disaster. There will be a representative from the US crash investigator, as well as from Boeing and CFM, the company that made the plane’s engines.

Recovering the jet’s ‘black boxes’ is vital to the investigation.

One device, called the flight data recorder, captures information about the plane’s airspeed, altitude, direction, pilot actions, and performance of all key systems.

The cockpit voice record captures sounds including conversations and background engine noise during the flight. Investigators will look at the maintenance history of the plane, the training and record of the pilots, communication with air traffic control and weather data.

They will examine pieces of the wreckage for clues. The size of the debris field is also important – when wreckage is spread over a very large area, it could indicate that the plane was breaking up before hitting the ground.

Investigators will be looking into the weather the plane encountered, any distress calls, and the possibility of technical failures, according to Bloomberg. Profiles of crew members will also be examined.

Expert says ‘weather, deliberate sabotage, or pilot error’ could be behind crash

The cause yesterday’s plane crash is still not known, according to the authorities in China.

If it’s found, the cockpit voice recorder could provide clues about what happened.

“Accidents that start at cruise altitude are usually caused by weather, deliberate sabotage, or pilot error,” said Dan Elwell, a former head of US regulator the Federal Aviation Administration.

Crash investigation will be difficult due to severity of damage, official says

Investigations into the China Eastern Airlines crash face a “very high level” of difficulty because the plane was so badly damaged, an official from China’s aviation regulator has said.

Authorities do not yet know what caused the jet to plummet to the ground, according to Zhu Tao, director of aviation safety at the Civil Aviation Administration of China.

The aircraft did not respond to repeated calls from air controllers during its rapid descent, he told reporters at the first government briefing on the disaster.

“Given the information currently available, we still do not have a clear assessment of the cause for the crash,” he said.