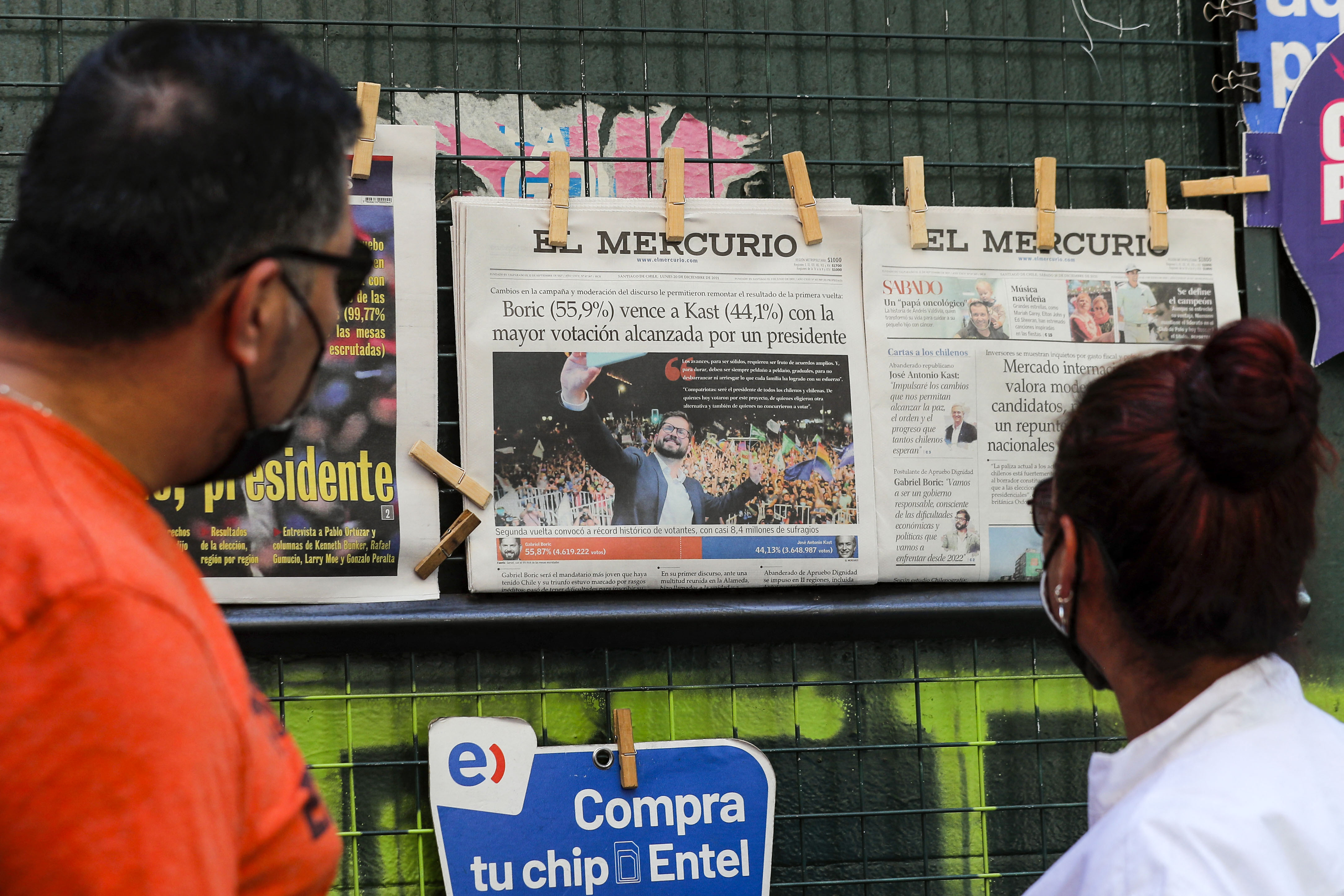 On Sunday night, tens of thousands of people cheered the new president-elect, Gabriel Boric, in Santiago de Chile. On Monday, the Santiago Stock Exchange collapsed almost 8% at the opening and the price of the dollar against the Chilean peso had the largest daily jump since November 2008, in the midst of the financial crisis. The dimension of the challenge that Boric will face as of March 11, when he succeeds Sebastián Piñera, is clear. While the street euphorically embraced the arrival at La Moneda of a new left, the world of money fell back under the threat of a change in model. Boric will now have to balance the anxiety of his voters, who have elected him to carry out structural reforms, and a conservative elite who fear the uncertainty of future changes.

Boric read a long speech to his voters on election night on a stage set up in La Alameda, the capital’s main avenue. He said there that Chilean economic progress, which is envied in the region, “has feet of clay” because “it does not reach the most needy.” And he warned that his agenda will honor the claims of the social outbreak of 2019, for health and education “that does not discriminate between rich and poor” and a pension system “worthy for those who worked to make Chile great.” To solve the first two points you will have to raise taxes. To guarantee better pensions, it will put an end to the AFPs, the private system that has been financed since the 1970s with the contribution of workers. The president-elect intends to replace him with another state one and “supportive, non-profit,” as he ratified in his speech.

A tax hike, especially on mining companies, the main source of export earnings in Chile, and the end of the AFPs scare investors away, as demonstrated on Monday in the Santiago Stock Exchange. “There is a reflex reaction from the markets whenever the left wins,” says Pamela Figueroa, an academic at the University of Santiago. “But Boric is moderate and this should be contained within a few days. Boric must specify which will be its economic team and that will calm the markets. They will not wage war on him, there is awareness that collaboration is needed to stabilize the economy ”, he explains.

The economy will undoubtedly be among the priorities of the new government. But not only that. He will also have to solve the problems of public security, the relationship with a Congress that will be tied between forces of the right and the left and reaffirm the constituent process, which he himself promoted in 2020 as a solution to the social outbreak. The members of the Assembly are mostly from the left and from small progressive groups. “If I were Boric, I would put all my political capital into ensuring that the new Constitution that is being discussed in the Assembly comes to fruition,” says Cristóbal Bellolio, from the Adolfo Ibáñez University School of Government.

“The message from the voters was that this Constitution cannot pass ten towns. You may want to redraw all of Chile and say that the mining concessions are ending, but then it will not be voted in the mining north, for example. Boric has to accompany that moderation that the voters are asking for and take for granted if he hands over power in four years with a less fractured society and a new Constitution that buries the one inherited from Pinochet, “adds Bellolio.

See also  Wheels or doors: Are there more doors or wheels in the world? Definitions and how many doors in the Burj Khalifa?

The art of balance

In any case, Boric will have to cultivate the art of balance. He has in front of him a society that expects immediate improvements in its economy, hit by the pandemic, and at the same time provides solutions to long-standing structural problems. The threat of frustration may be the main drag on a management that has created the highest expectations since the return to democracy in 1990.

54% of Chileans voted for a new, young left, which does not carry the backpack of dictatorship in its DNA, and turned its back on an ultra-conservative candidate, José Antonio Kast, who defended the legacy of Augusto Pinochet. “The question is what is the threshold that can be frustrated so that this continues working. There is a sensation of a change in the cycle, beyond the age of the character, ”says Bellolio, and recalls that Boric is only 35 years old, which in March will make him the youngest president in the history of Chile.

Chile also faces another novelty: a coalition that is unlike any of the previous ones, those that led the democratic transition for 30 years. There were two large blocks, one from the center-left, the Concertación, and the other from the center-right, which had two presidential experiences with Sebastián Piñera. I approve Dignidad, which supports Boric, arises from the union of the Broad Front and the Communist Party.

The Broad Front is made up of leftist groups that emerged in schools and universities during the riots of 2011 and 2017. Its cement is a generational complicity and a common diagnosis of the problems to be solved. “But now they will have to understand that they no longer do university politics,” warns Bellolio. “They will have to see how social programs are financed, how a budget is put together or the fiscal wallet is managed. If they have money for one thing, they won’t have it for another, ”he says.

For Pamela Figueroa, the secret of success will be in how Boric will reconcile urgent and long-term agendas. “If you do that, you will have a good government. It will not be easy, because the temptation is to go big, but Boric has the electoral support to make his own decisions, ”he says. Boric’s game will begin play in March.