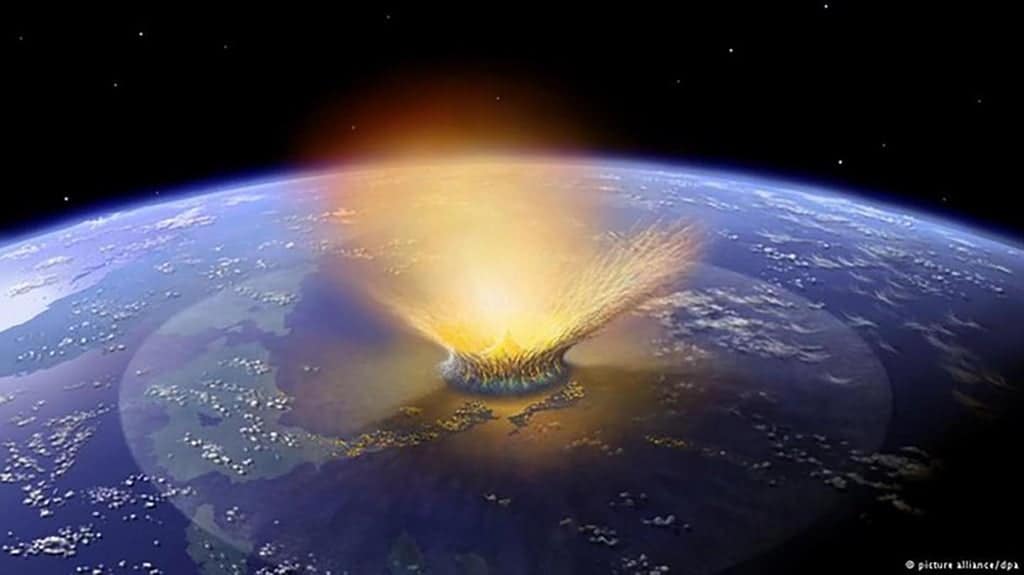 The dinosaur-killing asteroid that struck Mexico’s northern Yucatán peninsula 66 million years ago sent an extraordinary amount of sulfur aerosols into the Earth’s upper layers, according to a new study, effectively “blott[ing] out the Sun” and causing global cooling for years to come.

Scientists have long implicated fine sulphate particles in the stratosphere as the main driver for the massive climate change event that spurred mass extinction, killing 75 per cent of the Earth’s animals.

The precise impact played by sulfur in the event, however, has remained unclear.

“There has been uncertainty regarding how much reached the stratosphere where its effects on climate would have been greatly magnified,” study co-author Christopher Junium from Syracuse University said in a statement.

Researchers have also sought to find what really killed off the dinosaurs – whether it was the direct aftermath of the asteroid impact or erupting volcanoes that were located at the time in much of the Indian subcontinent, forming the Deccan Traps.

Scientists found a link between high levels of stratospheric sulfur and the impact of the asteroid in the location where the Chicxulub crater was formed and which found to be rich in gypsum, a sulphate mineral, said the new study, published this week in the journal PNAS.

“The sulfur isotope anomalies are confined to beds containing ejecta and, in the immediately overlying sediments, are temporarily unrelated to known episodes of volcanism that also bracket this event, further addressing the controversial role of the Deccan Traps in extinction,” scientists explained in the study.

The Chicxulub impact ejected material more than twice as tall as Mount Everest, redistributing it over the globe, scientists said.

While comet and asteroid impacts are common in Earth’s history, they said the Chicxulub impact was unique since it rearranged the balance of Earth’s biosphere.

Scientists still gain valuable insights on the event by studying the geologic record left behind by a thin layer of sediment called the K-Pg boundary, found throughout the world in marine and terrestrial rocks.

“The Chicxulub impact vaporised evaporite and organic matter-bearing marine carbonates, injecting sulphur-bearing gases into the atmosphere in addition to COtwo [carbon dioxide]soot and dust, potentially magnifying its effects,” scientists wrote in the study.

The findings revealed that “we’ve underestimated the amount of this sulfur that this asteroid impact created,” James Witts, a co-author of the study from the University of Bristol in the UK, told Live Science.

The sulphate aerosols lifted into the Earth’s stratosphere, scattering incoming solar radiation, and may have prolonged planetary-scale cooling for many years after the impact-generated plume dissipated, they noted.

“The impact blast and fallout ignited widespread fires, which together with rock dust, soot and volatiles ejected from the crater, blotted out the sun globally in an impact winter that may have lasted years, resulting in extinction,” Dr Junium said.

Researchers said the sulfate aerosol-induced global cooling, sulfuric acid rain and reduction of surface light for photosynthesis may have killed many species on Earth following the K-Pg impact.

The findings, according to the scientists, provide direct evidence for the long hypothesized role of sulphate aerosols in the post-impact winter conditions and global mass extinction.