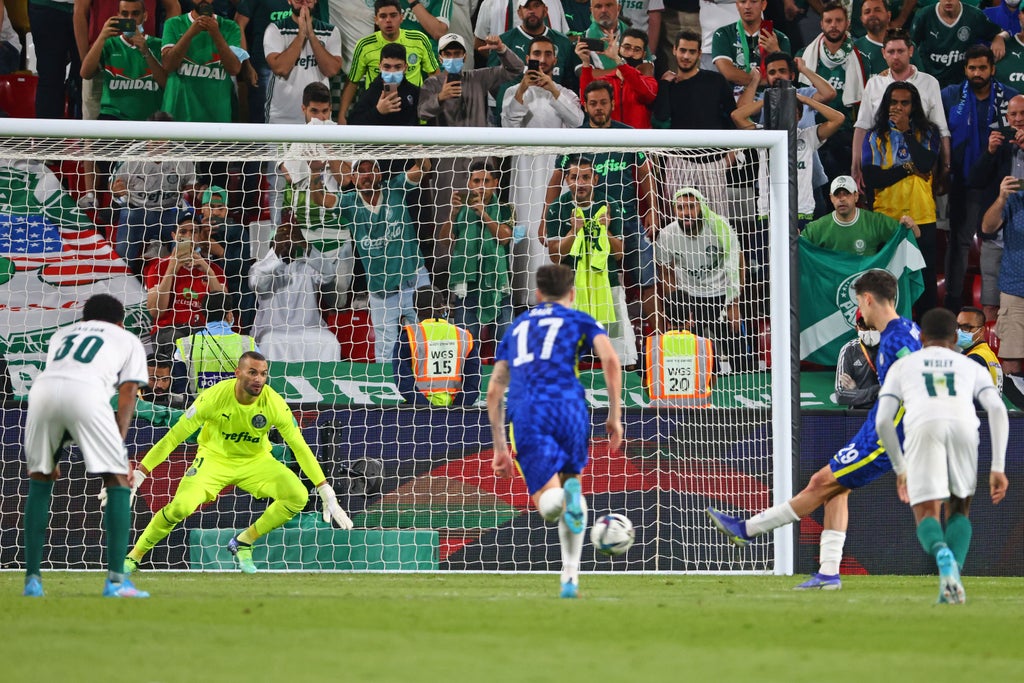 Chelsea have been crowned champions of the world for the first time in their history after beating Palmeiras in the final of the Club World Cup.

The Blues struggled to break down Palmeiras’ low-block in the first-half and the Brazilian side looked the most likely to score as winger Dudu worked a couple of good scoring opportunities but couldn’t quite take advantage.

Abel Ferreira would have been the happier of the two managers going into the break, but early in the the second-half Callum Hudson-Odoi’s pinpoint cross found Romelu Lukaku, and the Belgian beat two defenders in the air to nod a header past goalkeeper Weverton .

Shortly afterwards, though, Thiago Silva conceded a penalty after incomprehensibly handling the ball with his arm raised when defending a Palmeiras cross, and striker Raphael Veiga drilled the penalty home for the equalizer while sending Edouard Mendy the wrong way.

The match went to extra-time and with five minutes remaining Luan was harshly punished for a handball when Cesar Azpilicueta’s shot hit him from a couple of yards away, and Kai Havertz dispatched the penalty confidently to win the game.

The Blues are now the third English club to have become world champions, after Manchester United and Liverpool.

Kai Havertz is the man for the big occasion

The German international struggled to make an impact in his early days in the team under Frank Lampard, but compatriot Thomas Tuchel has found a way to harness not only the best of his technical ability, but of his strength of mind too.

He led the line excellently after Romelu Lukaku was withdrawn in normal time, and could have scored from headers on two occasions in extra-time had it not been for Rocha’s intervention in the Palmeiras backline. The composure and quality with which he scored the penalty after demanding the ball from Azpilicueta in such a raucous, hostile atmosphere was a great exemplification of his courage from him.

All that football fans want from players is for them to give them moments they will remember for a lifetime, and Chelsea supporters have most certainly had their money’s worth out of Havertz in that regard already.

The Palmeiras fans might be taking the long trip home disappointed, but they proved the value of the Club World Cup with their presence in the United Arab Emirates.

Thousands upon thousands of them traveled to the Middle East from Sao Paolo and they created an excellent atmosphere inside the Mohamed Bin Zayed stadium, far outnumbering the Chelsea supporters and giving their side excellent vocal support throughout the match.

The Club World Cup might be treated with disdain by a majority in the UK, but the South American sides revere it and the wild celebrations for Veiga’s equalizer only proved what it meant to the Palmeiras fans.

While European clubs often take victory for granted in this tournament, the determination the South American clubs have to win comes from their underdog status and the fact that their most talented footballers disappear off to Europe at young ages.

It’s about time that European fans stopped patronizing the other continental champions.

Lukaku and Chelsea styles might not be compatible long-term

Romelu Lukaku has had such a strange tournament out in the UAE. He managed to combine scoring at crucial moments in both matches with a couple of otherwise totally anonymous performances that suggest the Chelsea system and his individual style of play simply aren’t very compatible.

The Belgian is unquestionably an elite-level striker — his finishing technique is among the best in the world, his record at Inter Milan was nothing short of excellent, and his superb headed opener showed how ruthless he can be if given even half a yard of space.

Here, he was in part nullified by Palmeiras’ low-block, a problem he has encountered plenty of times in the Premier League in recent months. But the main problem with Lukaku’s lack of influence or dovetailing with his team-mates is how Chelsea set up.

The Blues’ front three is narrow, and the team-mates around Lukaku are all nimble, fleet-footed inside forwards who want to dribble with the ball around the penalty area, switch positions with one another and drop deep to collect the ball. None of this suits the ways in which Lukaku shines. He is unable to break in behind with the opposition playing deep, and is not the kind of striker who excels in coming deep to stitch quick, short passes together with his colleagues from him. The mismatch renders the attack disjointed.

The best period of Lukaku’s career saw him partnered with Lautaro Martinez in a duo where they were able to riff off one another, in a league where he was often able to be slipped in one-on-one behind a slower defence. If Chelsea are going to persist with this system and style of play under Thomas Tuchel, and there appears to be no desire or great need to do the opposite, then it might never quite make sense to have a player like Lukaku as a singular focal point .

This was the fifth consecutive FIFA Club World Cup to be held in the Middle East, with the 2017 and 2020 events also held in the UAE, and the 2018 and 2019 tournaments hosted by Qatar.

In January the semi-finals and final of the Spanish Super Cup, previously a one-off game held in the country itself, took place in Saudi Arabia. This year’s World Cup, moved to winter because of temperature concerns, will of course take place in Qatar.

All three of those Middle East nations have built their contemporary economies on oil, and have been grabbing every sporting event they can for the past decade or so in order to future-proof their revenues as society is required to move away from fossil fuels.

FIFA and other football bodies have been only too happy to oblige, selling tournaments to the highest bidder. The Club World Cup may not be considered an especially ‘important’ football tournament, but the strangle-hold the petrodollar states have over it is a continuation of a trend which will only increase across the board in the years to come.

Both of Chelsea’s Club World Cup fixtures were broadcast on Channel 4 in the UK, the first time the broadcaster has picked up the rights for a football tournament in many years.

James Richardson was back fronting the coverage having hosted Football Italia on the same network in the 1990s, on a day when C4 also broadcast coverage of Super League rugby and Formula E after the channel secured long-term agreements for both.

In addition, the channel has splashed out on live coverage of other huge sporting moments in recent months, including Emma Raducancu’s victory in the final of the US Open, and the finale of the Abu Dhabi Grand Prix as Formula 1’s title battle reached its climax.

The future of Channel 4 is under threat, with the UK government exploring the possibility of privatizing the channel, which has been publicly owned since its launch in 1982. The Digital, Culture, Media and Sport minister Nadine Dorries has previously said that privatization is the “obvious way” for the network to grow.

For its part, C4 seems to believe that picking up more and more rights to sporting events and bringing in the audience which follows is the right way to make its public service broadcasting more robust. For fans, more free-to-air sport can only be a good thing.