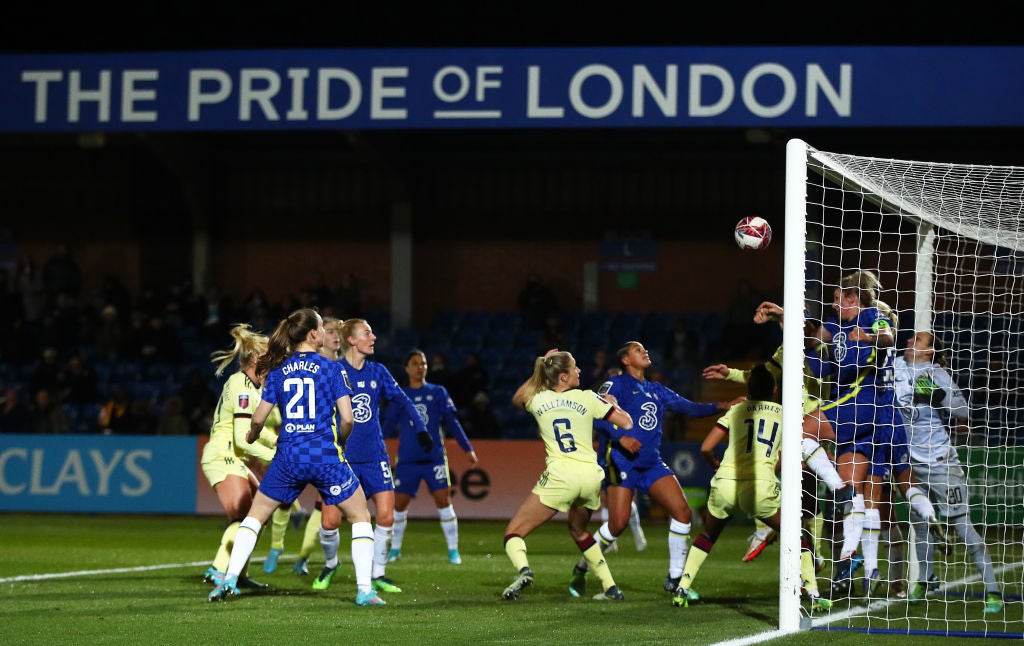 As you were, then, but at the end of this Women’s Super League season one of Arsenal or Chelsea will be grateful for the point they picked up in this top-of-the-table clash. A London derby that had all the ingredients for a title-decider certainly delivered in terms of drama, but was lacking the final finishing touch that will leave one of these sides rueful of missed chances and two points dropped by the end of May.

An opening goal that felt as if it was coming from the first whistle somehow did not arrive, despite the array of attacking talent that was on display. In the end, an almighty goalmouth scramble from an Arsenal corner rather summed up the match. The WSL is usually determined by fine margins and neither team could manage to cross the line.

You would suspect that Arsenal are happier with a point. The Gunners remain at the top of the table, with Chelsea two points behind and with a game in hand, but this was a much better performance from Arsenal than in their recent showings.

After dropping points in three out of their last four fixtures and a winter in which their form stuttered, it was needed. There was to be no repeat of the 3-0 defeat to Chelsea in December’s FA Cup final, an occasion in which a clear gulf appeared between the teams on the field.

There was little to separate them this time around. Chelsea’s fate of a second consecutive title defense remains in their hands but this was not the assured performance that has become expected of Emma Hayes’ side on such domestic occasions.

A Friday night clash under the lights at Kingsmeadow was a fitting scene for the most significant match of the WSL season so far. Fixtures such as these have decided title races in previous years, even though you would hesitate to make such assertions due to the unpredictability of this campaign.

The team sheets reflected the magnitude of the occasions: stuffed with attacking talent, there was no shortage of star power. A full debut for the Sweden international striker Stina Blackstenius, following her January arrival and late equalizer against Manchester United last weekend, in attack alongside Vivianne Miedema signified Arsenal’s bold approach under Jonas Eidevall.

It was one that was mirrored by Chelsea, as Hayes reunited Chelsea’s front three of Sam Kerr, Fran Kirby and Pernille Harder, and it was the defending WSL champions who made the brighter start.

The early space behind the Arsenal high line suggested that the Gunners had not learned their lesson from the FA Cup final defeat. Aniek Nouwen’s floated pass behind the Arsenal defense and into the left channel was the first clue that it could be exploited. Harder took a good first touch and looked for Kerr in the middle. It evaded her and fell to Kirby, who fired over.

Arsenal were happy to thrash clear as they seemed to ride out the early wave of pressure but they soon took control and as Miedema roamed in the central space, the visitors began to work the ball into promising positions. The Netherlands international drifted into pockets and opened up gaps elsewhere. Beth Mead threatened from the right and flashed a teasing ball across the face of goal in the first spark of action in a half that was largely played in Chelsea’s territory.

There were appeals for a penalty when Leah Williamson flighted a pass wide to Caitlin Foord who stood up Jess Carter and drifted past her onto her right foot. Foord stumbled in a tumble of legs but her fall from her was delayed and should have resulted in a yellow card from referee Rebecca Walsh.

Foord took on Carter down the left and from the resulting short corner, Rafaelle Souza rose to nod the ball back to Miedema, who hooked a shot against the outside of the near post. It was becoming the Miedema show and a drifted ball towards Mead only needed a touch to direct it past Chelsea goalkeeper Ann-Katrin Berger, but it just evaded the England international.

Miedema combined once more with Mead in on the right as Berger was forced to gather the ball on her goalline, before Blackstenius found space between Millie Bright and Nouwen and should really have better as she thrashed a first-time shot over the crossbar.

There was still a big chance for Chelsea to take the lead on the stroke of half-time. Reiten crossed towards Harder and the ball broke to Kerr, who had barely had a touch, two yards out. The goal opened up and it required a last-ditch block from Steph Catley to send the teams into the break level.

The momentum had turned once more, though, and Chelsea began the restart on top. Erin Cuthbert linked with Kerr and Kirby and saw a shot deflected wide, before Harder lined up a left-foot volley that narrowly skimmed past the post.

Harder was by far the sharpest of the Chelsea front three. A clipped ball across goal led to a double chance as Kerr scuffed her effort from inside the six-yard box, before Kirby’s strike was close range was blocked off the line.

There was a flurry of action on the hour-mark. Arsenal appealed for a penalty when Foord had a shot blocked by Carter’s arm at close range, before Chelsea went down the other end through Kerr in a move that ended with Arsenal’s Manuela Zinsberger saving a low volley from Ji So-yun, as Williamson then dived in front of Harder’s follow-up.

A goal was coming, still, and yet somehow it continued to evade Chelsea. Harder’s cross from the left was cleared by Williamson only as far as Reiten, who fired straight at Zinsberger.

To end it all, fittingly, was a final flourish of more last-ditch defending. Berger clawed at an inswinging corner from the left as Arsenal crowded the six-yard box. Somehow, to the disbelief of 3,000 in Kingsmeadow, it was not forced over. Chelsea had a late goal disallowed for offside before a Kerr header fell into Zinsberger’s grasp, and in a season set to go down to the wire this top-of-the-table clash came down to a matter of millimetres.