The Chelsea Flower Show will return to London this week, with special displays to mark the Queen’s platinum jubilee.

The garden show, which opens to the public on Tuesday 24 May, will include a floral sculptural portrait of the monarch in the official platinum jubilee shade of purple.

This year marks the return of the event to its traditional May slot, after it took place in September in 2021 due to the pandemic.

Members of the royal family and celebrities will get a first look at the show, hosted by the Royal Horticultural Society (RHS), on Monday.

Earlier this week, Buckingham Palace announced that the Queen hopes to attend the event at the Royal Hospital Chelsea, but a final decision will be taken on the day.

The 96-year-old monarch has been experiencing mobility issues and has recently skipped several official engagements, including the state opening of parliament.

In a nod to the Queen’s love of trees, the portrait sculpture will be covered on both sides with an assortment of native British-grown tree branches.

The branches have been connected with shelves bearing 70 terracotta pots.

The pots, handmade in Warwickshire, have been planted with lily of the valley – one of the Queen’s favorite plants, which also featured in her coronation bouquet.

Another installation will transport visitors to Balmoral Castle in Aberdeenshire, which is thought to be one of the Queen’s favorite places.

A canopy of flowers, including fresh delphiniums, will emulate the colors and plants of the Scottish landscape.

Additionally, the obelisk monument in the center of the show’s Great Pavilion tent will be surrounded by a photography exhibition of the Queen’s visits to the show throughout her reign.

Sarah Poll, partner shows manager at the RHS, said: “It has been three years since we’ve been able to hold RHS Chelsea Flower Show in the spring, and we couldn’t be happier to see the show return to its traditional May slot.”

The show was canceled in 2020 during the first year of the pandemic.

“The glorious weather we have had in the last few days means that the plants will be at their best as we see our spring favorites at RHS Chelsea once again,” Poll added.

“With a bumper crop of 39 gardens, the return of a spring RHS Chelsea will set the gardening season off with a bang.”

Aside from the jubilee, the flower show will also cover themes of “planet-friendly gardening” and mental wellbeing.

BBC Earth has teamed up with the RHS for a garden designed by Joe Swift featuring a raft of species that help to sustain bees, which are in decline in the UK and more widely.

The design features the silhouette of a bee wing as the garden’s centrepiece, alongside salvias, hardy geraniums, and euphorbias.

The exhibit also has shallow water for insects to drink from, mud for bees to make nests and a dismantlable bee hotel.

Elsewhere the show will focus on the importance of mental wellbeing and the role nature played during lockdown, with many people finding solace in gardens and green spaces.

On Saturday, cancer campaigner Dame Deborah James announced that a rose named in her honor will go on display at the show.

The rose is a white bloom with a subtle “ballet slipper pink” center that flowers in early June.

James, who is currently receiving at-home end-of-life care for bowel cancer, launched a Bowelbabe Fund for Cancer Research UK. It has raised more than £6.4 million so far. 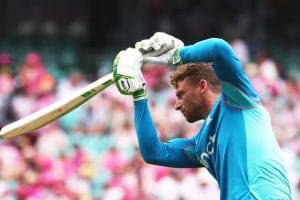