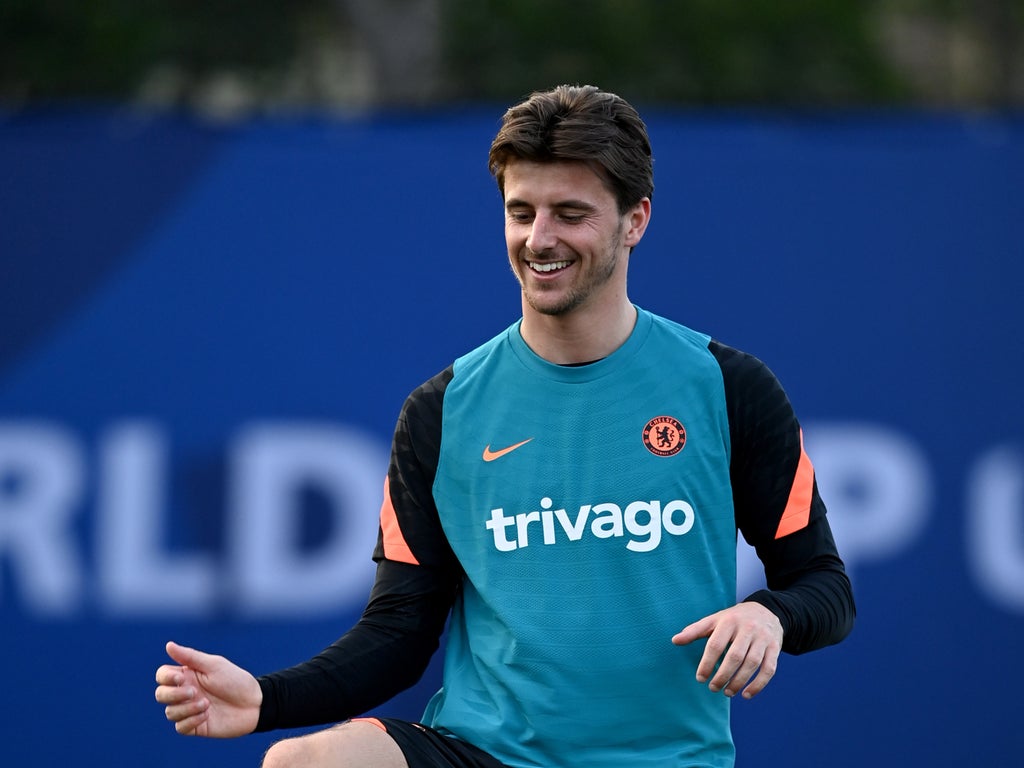 Unlike a lot of players, Mason Mount insists on keeping his runners-up medals. They serve as the most searching form of motivation.

“You look at them and think how distraught you were after the game,” he says. “They bring back that kind of feeling. I know a lot of players, as soon as they get a second-place medal, they throw it to the side, but I kind of like having them. They’re not in the trophy cabinet. They’re on the side. You can use them as motivation. You can use them to remember that feeling you had after the game, that you never want that again.”

There is an irony to use such painful memories, because Mount admits he can’t remember some elements from the successes – not least the biggest moment of his career so far.

That was the pass that set up Kai Havertz’s goal for Chelsea to win the Champions League final against Manchester City in May.

“I remember playing it but after that it’s kind of a blur,” Mount explains. “I remember screaming so long I gave myself a headache, and I lost my voice in that instant, like that quick. But yeah, that moment is kind of blurry.”

Mount is getting well versed in the rhythm of these occasions, though, to the point they’re almost becoming second nature. Saturday’s Club World Cup final against Palmeiras in Abu Dhabi will be the sixth major final of his career, with the seventh to come in two weeks in the Carabao Cup final against Liverpool.

He has had a mixed record so far, losing two FA Cup finals and Euro 2020, but winning the Super Cup and Champions League.

It means he is well placed to pass on advice about how to handle such tests, even at just 23. As he sits in the more relaxed surroundings of the terrace of Chelsea’s opulent Ritz Carlton base, he gives a unique insight on the much more tense circumstances of a build-up to a Champions League final.

“The first one, you are nervous. In the Champions League, I don’t think I slept that well, and for the day of the game, it was the only one I have been very, very anxious about. Butterflies in my belly. I did not eat well but as soon as we got to the stadium, we did the warm-up and I was excited. I was buzzing. It was the lead-up to the game which was different. Before the game, I was excited and ready and pumped up and you feel the atmosphere. My family was all in the crowd and you step onto the pitch and feel the game and I was excited.

“I remember the manager saying something at breakfast – a jokey comment. It relaxed us, and the more experienced players in the group, like Jorgy [Jorginho]he is a very jokey character and can also be serious when he needs to, but he is the one who goes around and maybe speaks to the ones who are feeling it a bit more.”

Since Mount is now one of the players with more experience, he is well placed to impart advice to younger teammates on how to deal with such occasions.

He says it is imperative not to dwell on potential situations too much, or you can start to visualize things going wrong.

“I would say enjoy the game, enjoy it as much as you can. When you enjoy something like that, you remember a lot about it.

“That helped going into the Euros when we got to the end. I was prepared for that. That was obviously another massive, massive game. There was a lot of pressure but I felt we dealt with it as a team.”

It will no doubt help against Palmeiras on Saturday. Many might think this match at the Mohammed Bin Zayed Stadium won’t have anything like the tension of a Champions League final, but Chelsea are taking it very seriously. Petr Cech and other figures from 2012 have stressed to the players how much they regretted not winning it then, and there is also the fact that it is the only major trophy the club have not won.

“One thing I’ve learned over the last couple of days, this is a very, very rare competition to play in. You have to win the Champions League. That doesn’t come around very often so Petr has spoken a bit in training before that he doesn’t have many regrets in his career, but one of them was not doing this to its fullest and winning this competition when he had the chance. It only came around once in his career, and may only come around once in my career, so as a group we know how serious we’re taking this and how important it is to give everything to win a major competition that not many win.

“We’re focused on that and that’s definitely a message that has hit hard the last couple of days. You don’t get this opportunity very often and we have to take it.”

It’s not just every final that a player as ambitious as Mount wants to play in, though. It’s every game, which has made this season somewhat frustrating. He even missed games due to having to get all four of his wisdom teeth from him taken out.

“It’s been a bit stop-start, I had a little injury at the beginning. You don’t think your teeth are going to stop you from playing football for a week or so but it did. I had to get them out so that was a bit of drama that I went through, and it did actually really mess me up for a little bit. It was Newcastle away and I woke up on the day in a lot of agony so I had to come back. I was in the car straight from Newcastle back to London and it was the worst journey I’ve ever been on. I was struggling a lot. Then I got them out and I missed the England camp, so it was a difficult little period where I didn’t think it was going to happen at all. I wanted to just rip them out myself but it probably wouldn’t have been the best idea.

“You’re not always going to play every single game in a season and I think coming off the back of last season, where I played a lot of games, sometimes you have to manage it. You don’t wish for injuries but sometimes a break here and there does help form, it does help recovery and I feel like definitely recently the breaks here and there, and the week’s break we just had from the Premier League, it definitely helps your feeling going into games. You feel more energetic, you feel more ready to play, so that’s definitely been a helpful period.

“Sometimes you have to admit to yourself and go to the manager and say, ‘Look, I am feeling it a bit’ — through gritted teeth — and maybe the next game coming it’s best not to start.”

That doesn’t mean he has actually asked to be rested, though.

“No! No, I haven’t. I can’t bring myself to say that. I just leave it to the physios or other staff to say, he’s run that much in the games or cumulative games added up that I’ve run quite a lot and maybe it’s best to let him recover for a bit. But it would never come from me, no, never.”

By contrast, Thomas Tuchel is likely to get Mount’s “burning eyes” any time he leaves him out. That was a description that first came up during his time on loan at Vitesse Arnhem, and has stuck.

“I’m definitely someone to show that I’m probably angry, and through that it’s probably them eyes that’s been spoken about,” says Mount.

“I don’t know if I’m actually doing it or not. But you don’t want to miss a game as a player. Especially missing out on a big game, it hurts. But I’m not someone to go straight away to a manager and say, ‘Why are you not starting me, I should be playing.’ I’m someone who likes to show in training that I’m definitely ready to play and ready to start. I don’t want to miss out on any big games.”

There can be a little bit of bite about Mount, as even players such as Pepe have found out. If this Club World Cup final descends into the chaos it has in the past, the midfielder is more than ready to mix it.

“I think every time you do play, you show you’re not scared of anything,” says Mount. “Have no fear of anything. We have to show that as a group and we showed that throughout the whole Champions League run. We were coming up against teams that are experienced. Against Atletico Madrid we showed no fear. We beat them and then we go to Real Madrid, Porto – teams that can be very dominant away from the football side. They’ve got Pepe at the back, who you know about, trying to get in our heads. As I said before about those experiences you learn from, that’s definitely one you take.

On Saturday, he’s ready for another ending to come his way. The hope is that it will be the first of a year filled with them, and ending with another a mere 300km away with England.

That would certainly be something to remember.