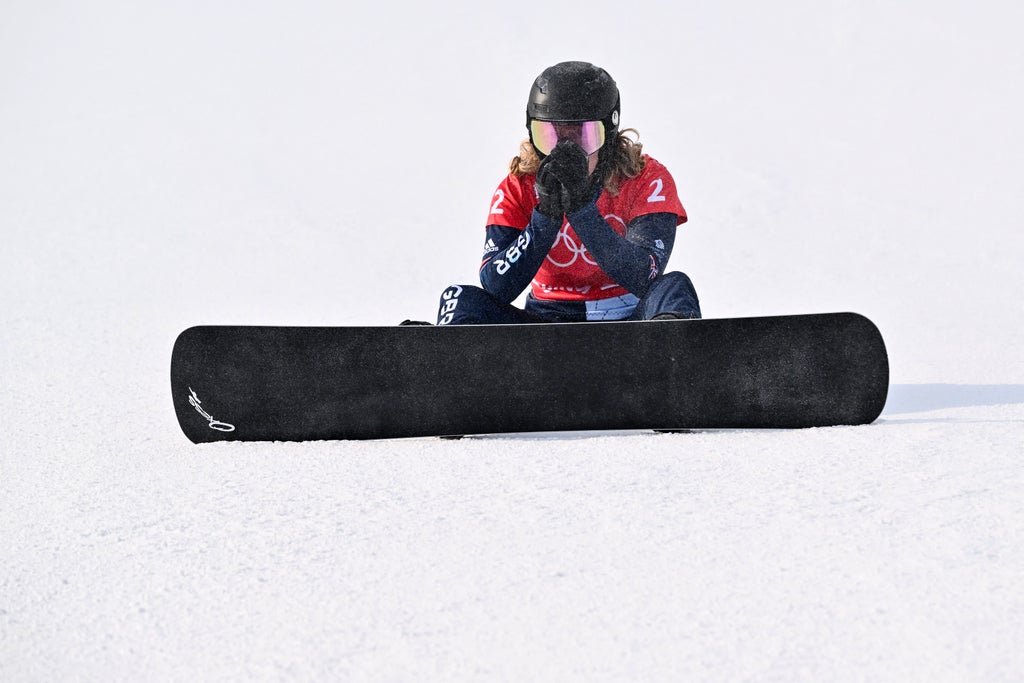 Britain’s Winter Olympic medal banker failed to pay out as another world champion crashed out in Beijing.

Charlotte Bankes has enjoyed an impressive World Cup season and qualified for the snowboard cross knockouts in the second fastest time.

But after progressing through the first round, a tactical error in the quarter-finals, when she went too wide, lost momentum and was overtaken, left her flailing in third, with only the top two progressing.

It was brutal to watch, Bankes blinking back the tears as she admitted she’d saved her worst race of the season for its biggest moment.

It’s rare Britain shows up at the Winter Olympics with a genuine hot favorite in their event, perhaps legendary ice dancers Torvill and Dean in 1984 or Lizzy Yarnold, who arrived as skeleton world champion eight years ago in Sochi.

And Bankes was rightly up in their class, despite competing in a sport were fractions matter and the difference between feeling a chump and a champ are razor-thin.

“It’s kind of frustrating to have the worst race of my season here at the Olympics,” she said. “Right now I honestly don’t understand what just happened, it’s just a feeling of total disbelief. This is not what we came here for but we’ve got to try and look ahead.

“We did everything we could to be on our A game, it’s just not happened. The training we’ve had since arriving has been great, I’ve been in the top three all week. We knew it was going to be tight racing, it just didn’t fall for us.

“There’s been pressure, but the pressure I put on myself is worse than anything else so that’s no excuse. I thought we dealt with it pretty well, the team were amazing around me.

“Unfortunately I just didn’t do the race I wanted and it’s frustrating to do that at the Olympics when everyone is watching.”

Bankes, who was born in Hemel Hempstead but moved to Puy-Saint-Vincent in the southern Alps as a four-year old, competed for France at the last two Games but switched allegiance to Great Britain in 2018.

“I’ve no regrets about that decision,” said Bankes, who’d accused the French team of not supporting through a long-term hip problem she claimed was about to end her career.

“I’ve never thought back about that and I’m just super happy for the support I’ve had from the British team. I wouldn’t be here if I hadn’t made that choice when I did.”

Still only 26, Bankes can perhaps look to the example of American Lindsey Jacobellis, the American gold medalist ten years her senior.

At the 2006 Games in Turin, she famously threw a trick when leading over the final jump, crashing to the ground and seeing rivals stream past her. The video footage became the best visual evidence for snatching defeat from the jaws of victory but 12 years later, she finally got her redemption from her.

Bankes’s disappointment is a blow for Team GB, who saw their world champion mixed curling team lose in the bronze medal match on Tuesday, while World Cup stalwarts, snowboarder Katie Ormerod and free skier James Woods, were well clear of the podium mix in their opening events.

“I really don’t know about more Olympics, I’m not thinking about it now,” added Bankes, who will also compete in the team event with Huw Nightingale, live on discovery+, Eurosport and Eurosport app

“We’ve got a strong team here and there’s some good results coming, I’m sure of that. I’ve been very focussed on my own event but I know the entire team is giving their best and that’s all we can do.”

Meanwhile, Canadian bronze medalist Meryeta Odine paid tribute to close friend Bankes and backed her to rebound from the disappointment.

“I trained with Charlotte all year and she’s one of the hardest working, funniest girls on the tour,” she said. “I was just sad not to see her in that final, it was a shock to me as I saw her taking the gold after the year she’s had.”