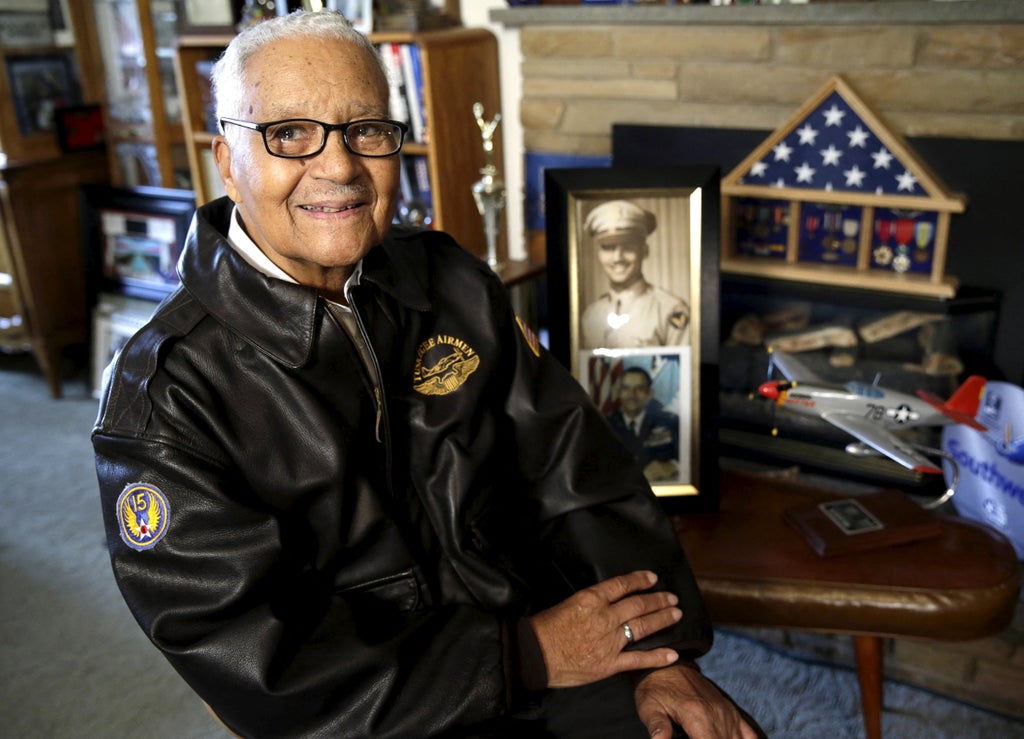 Charles McGee was a former fighter pilot and the last surviving member of the Tuskegee Airmen, a pioneering group of black airmen in the US military.

McGee, who has died at the age of 102, was one of the first African-American pilots to fly fighter planes during World War II. Taking to the European skies, his squadron escorted heavy bombers attacking targets in Germany and German-occupied territories.

“People all over the country were really interested in being accepted for who they were, in getting a chance before they were told they couldn’t do something just because they were born,” McGee once said.

Charles Edward McGee was born in 1919 in Cleveland, Ohio, the son of Ruth and Lewis Allen McGee, who was a World War I Army veteran and a minister in the Episcopal church.

McGee was studying engineering at the University of Illinois when he enlisted in October 1942. Having applied for pilot training, he was sent to Tuskegee Army Air Field, where on his admission he learned to fly the Bell P-39 Airacobra fighter and Curtiss P -40 Warhawk. aircraft. He said in a later interview: “To be able to get up there and twist and turn and come back and put his feet on the ground, he was hooked! I have never forgotten that first day.”

At the time of World War II, the US military had been completely segregated, but by 1941, some limited integration into parts of the military was allowed. Although black airmen faced outright discrimination and racism during their flight training, McGee later commented that “we were as keen to support that effort as anyone else at the time and so we turned our backs on the fact that there was segregation.” ”.

Its role in Europe was to provide support for heavy bomber aircraft, as an escort. McGee graduated from training in 1943 and flew more than 130 missions with the Tuskegee Airmen in Europe before returning to the US to become a flight instructor with the rank of captain.

Despite their initial struggles to gain acceptance, the Tuskegee Airmen became a respected unit of the US military. His exemplary wartime service would influence then-President Harry S Truman’s decision to desegregate the military entirely in 1948.

McGee flew during the Korean War (1950-1953), as a base operations officer, stationed in the Philippines and flying 100 low-level bombing and strafing missions in the P-51 aircraft. In Vietnam, he deployed to fly the McDonnell Douglas RF-4 Phantom photoreconnaissance aircraft, flying 172 missions as commander of the 16th Tactical Reconnaissance Squadron.

By the end of his three-decade career, McGee had flown 409 combat missions. Following his retirement with the rank of colonel in 1973, McGee dedicated his life to retelling the story of the Tuskegee Airmen and the lessons he had taught American society. He finally graduated with a degree in 1978, having returned to his studies interrupted by the war some 36 years earlier.

McGee received the Distinguished Flying Cross in 1951 while serving in Korea. In 2007, he and other surviving members of the Tuskegee Airmen received the Congressional Gold Medal from George W Bush “in recognition of their unique military record, which inspired revolutionary reform in the military.”

The Tuskegee Airmen National Historical Museum in Detroit was established as a testament to the work of the pilots. The museum said in tribute: “An African American in a segregated US military, McGee fought against institutional racism and discrimination as he served his country in uniform for more than 30 years. He embodied the mantra that he liked to pass on as advice to younger generations: ‘perceive, prepare, act and persevere’”.

“Today we lost an American hero,” said US Secretary of Defense Lloyd Austin. “While I am saddened by the loss of him, I am also incredibly grateful for his sacrifice, his legacy and his character.”

McGee married Frances Nelson in 1942, who predeceased him. They had two daughters and a son.