Chancellor Rishi Sunak has referred himself to PM Boris Johnson’s independent adviser on ministerial interests, Lord Geidt, over his own financial affairs

Rishi Sunak has asked the Prime Minister for a probe into his own financial affairs.

The under fire Chancellor tonight took the dramatic step of referring himself to Boris Johnson’s independent adviser on ministerial interests, Lord Geidt.

It comes hours after he had ordered a Whitehall inquiry into how his wife’s tax arrangements were leaked to the media.

Sunak’s political future hangs by a thread as he faces fresh calls to come clean over his tax affairs and US immigration status.

The Tory minister tried to hide behind claims he and his billionaire heiress wife Akshata Murthy were the victims of a “smear” campaign, after it emerged she had been avoiding paying UK tax as a non-dom.

And the Chancellor, whose Spring Statement last month failed to help families struggling with the UK’s biggest fall in living standards since the time of rationing, was reportedly weighing up whether to quit after he was hit with a series of separate claims.

His team has previously argued all declarations to the register of ministerial interests were above board.

In a statement posted on Twitter on Sunday evening, the Chancellor said: “I have always followed the rules and I hope such a review will provide further clarity.”

In a letter to Boris Johnson, Mr Sunak said his “overriding concern” was to maintain public confidence.

“My overriding concern is that the public retain confidence in the answers that are given and I believe the best way of achieving this is to ensure those answers are entirely independent, without bias or favour,” he said.

“To that end I would recommend that Lord Geidt makes all his conclusions public.

“I am confident that such a review of my declarations will find all relevant information was appropriately declared.

“I have throughout my ministerial career followed the advice of officials regarding matters or property and disclosure and will continue to do so.”

The White House has been urged to investigate after the Chancellor admitted holding a US green card while Chancellor – foreign ministers are supposedly not permitted to do this.

Mr Sunak has been hit with reports that he is listed as a beneficiary of tax haven trusts in the Cayman Islands and British Virgin Islands, despite pledging to close tax loopholes.

Meanwhile, Infosys, an Indian firm his wife holds £700m of shares in, is “urgently” reviewing its base in Moscow amid claims the Sunaks were benefiting from Vladimir Putin’s regime.

Shadow home secretary Yvette Cooper said it was a matter of “basic fairness” that the Chancellor’s family should pay tax in the same way as everyone else.

“I don’t think the Chancellor gets that. That raises real questions about his judgment of him, ”she told BBC1’s Sunday Morning programme. 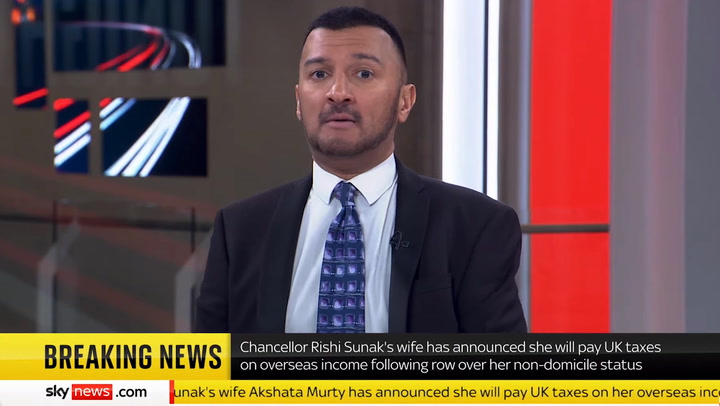 Policing Minister Kit Malthouse admitted Ms Murthy’s status as a non dom – something she gave up last week due to swift public fury – was “not ideal”, but nonetheless rushed to defend Mr Sunak from colleagues who declared the Chancellor’s career to be “toast” .

He said the Chancellor was a “smart, clever, committed politician” who had helped steer the economy through the worst of the pandemic.

Ms Murty, who remains an Indian citizen, dramatically announced on Friday that she would now pay UK taxes on all her worldwide income as she did not want her tax status to be “a distraction”.

It has been estimated that her non dom status could have saved her £20 million in taxes on dividends on her shares.

Mr Malthouse admitted it was “not a brilliant time” for the details to come out when the country was struggling with a cost of living crisis.

“Rishi Sunak has been a remarkable force for good in this country over the last two years,” he said.

“He put in place some incredible support schemes during the pandemic at enormous speed.”

“It is not ideal, but we all know when we sign up for this job that there is going to be rough times and smooth times,” he added.

Meanwhile sources close to Mr Sunak have played down reports that he was moving his wife and two daughters out of Downing Street to escape the glare of the media.

The Sunday Mirror published pictures of removal vans arriving in the street on Saturday to take their belongings away.

One source said however they had always intended to spend more time in their west London home as their elder daughter, Krishna, entered her final term of primary school before moving on to secondary school.

Mr Sunak is still expected to stay in Downing Street during the week while joining them at weekends.

Labour’s Angela Rayner said: “The chaos caused by the Conservatives over the last week must be brought to an end.

“A fish rots from the head. It is the Prime Minister’s responsibility to bring this debacle to a close by ensuring that standards are upheld across his Cabinet.

“When it comes to the Tories hiking up taxes on working people, it seems it is one rule for them and another for the rest of us.”

See also  The reconciliation processes, the limits of humor and the police demonstration: this is how 'El Ágora' has been | Hour 25 | Present