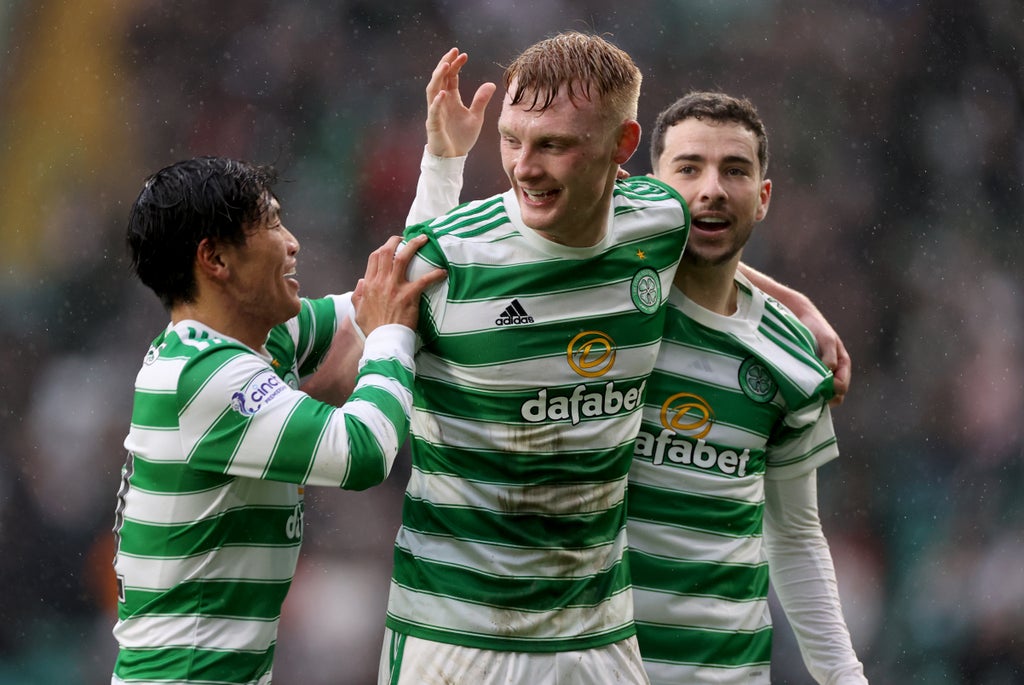 Celtic secured their place in the Scottish Cup quarter-finals with comprehensive 4-0 win over Championship side Raith Rovers at Parkhead.

The Hoops led at the end of a rather low-key first half through a fine strike from Liam Scales but second-half goals from Giorgos Giakoumakis, substitute Daizen Maeda and stand-in skipper Nir Bitton put gloss on the scoreline.

Ange Postecoglou’s side have thrilled in recent months with a 20-game unbeaten run in the cinch Premiership to take them top but this performance took time to warm up albeit credit should go to John McGlynn’s side who were, for the most part, determined and well -organised.

A further bonus was the return of defender Christopher Jullien as a second-half substitute following a long spell out with a knee injury.

The backdrop to the game saw Raith embroiled in the controversial signing of David Goodwillie who was found by a judge in a civil case in 2017 to have raped a woman.

The Kirkcaldy club’s decision to hand the 32-year-old striker a two-and-a-half-year contract sparked a fierce backlash.

McGlynn apologized for the “enormous” mistake in signing the player while Raith stated that Goodwillie will not play for them, and the Rovers boss would have been glad the focus was back on the football.

While McGlynn made one change – former Luton defender Frankie Musonda in for injured Tom Lang – Postecoglou rang the changes with only goalkeeper Joe Hart defenders Anthony Ralston and Cameron Carter-Vickers and midfielder Reo Hatate keeping their places following the 3-2 win over Aberdeen on Wednesday night.

It took less than three minutes for the home side to demonstrate their intent with winger Mikey Johnston firing just over the bar after linking with Hatate.

With the home side dominating, Bitton’s long-range shot dipped over the bar and in the 16th minute Hatate’s decent drive was saved by Kirkcaldy keeper Jamie MacDonald.

Midway through the first half Celtic got the breakthrough when Tom Rogic rolled the ball to Scales just outside the box and the former Shamrock Rovers player took a touch before steering a left-footed shot past the diving MacDonald.

Raith had offered little in attack but minutes later they claimed for a penalty when Carter-Vickers appeared to use an upper arm to control a goal-bound header from Reghan Tumilty but referee Steven McLean took no notice.

The Fife side pressed enthusiastically at the start of the second half but Celtic defended well and at the other end Giakoumakis struck the bar from Johnston’s cut-back as the offside flag was raised.

Johnston limped off injured to be replaced by Jota before Hart saved a 20-yard drive by Jamie Gullan as Rovers threatened again.

However, the tie was effectively over in the 68th minute when Jota raced down the left and squared for Giakoumakis to slip the ball past MacDonald, the striker’s last action before he was replaced by Maeda.

In the 71st minute the Japan striker grabbed a third when Ralston helped on a corner with Maeda heading over the line at the second attempt.

Jullien was back on the bench after recovering from a knee injury which kept him out since December 30, 2020 and he got a huge cheer when he replaced Carter-Vickers.

McLean pointed to the spot when Jota’s shot came off the arm of substitute Sean Mackie – on for Raith to make his debut – and after MacDonald saved his penalty, Bitton bundled the ball over the line.