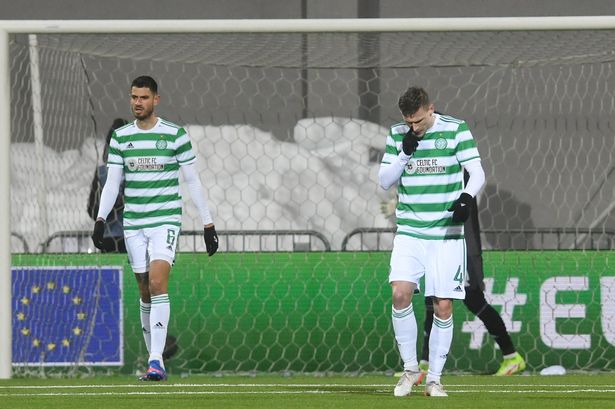 Celtic flopped to a Europa Conference League exit with a 2-0 defeat to Bodo/Glimt in Norway adding to the Norwegian side’s 3-1 victory in Glasgow last week.

The 5-1 aggregate score is a sorry sight for the Scottish Premiership leaders and may raise some eyebrows but they were second best for the majority of the 180 minutes across the tie.

Ange Postecoglou made the bold call of leaving several high-profile stars out of this encounter in the Arctic Circle and that backfired.

Callum McGregor came on at the break and gave Celtic a different gear but overall not many in green and white hoops will look back too fondly on this match.

here’s how RecordSport rated the Celtic side on an evening to forget in Norway.

Joe Hart: It was just as well the keeper was on form or it could have got really messy for the Hoops in that first half. He made key saves but could not stop the opener. 7

Anthony Ralston: Always willing but given a tough time with the way the Norwegians attacked down the sides. Got in to some advanced areas to deliver some dangerous balls. 6.

Stephen Welsh: The youngster was put under pressure with the Bodo press and there were a few sticky moments in the opening 45 but he settled after the break. 6

Carl Starfelt: Had his work cut out during that frantic first half but got higher up the pitch after the interval. Not the most enjoyable night. 6

Liam Scales: Tough evening for the kid and one to chalk up as an experience. Bodo often raided down his flank and there was no respite. 5

Nir Bitton: Up against it in the midfield as he often found himself outnumbered. He wanted too much time on the ball and got caught out too many times. 5

Matt O’Riley: Couldn’t get a foothold early on and tried to switch sides and see if there was any luck on the other flank but it was a similar story. 4

Tom Roger: Had problems in the first leg with Bodo beating his press and it happened again. He saw plenty of the ball but crowded out and left chasing. 4

Daizen Maeda: Tried to play on the shoulder of the last man but too often was too keen and got flagged offside. More creative in the second period and should have scored. 5

James Forest: Struggled to get on the ball and when it did come his way there wasn’t much joy to be had a Bodo were quick to double up. 5

Giorgos Giakoumakis: Tried to put pressure on defenders but was an isolated figure for one sells as service was practically non-existent. 5

Callum McGregor: (for Rogic 46) Improved the side immediately within his arrival and bolstered the midfield. 6

Liel Abada: (for O’Riley 46) Lively with a couple of efforts and involved in a big shout for a penalty. 6

James McCarthy: (for Giakoumakis 76) Added a bit more shape but the game was gone by that stage. 4