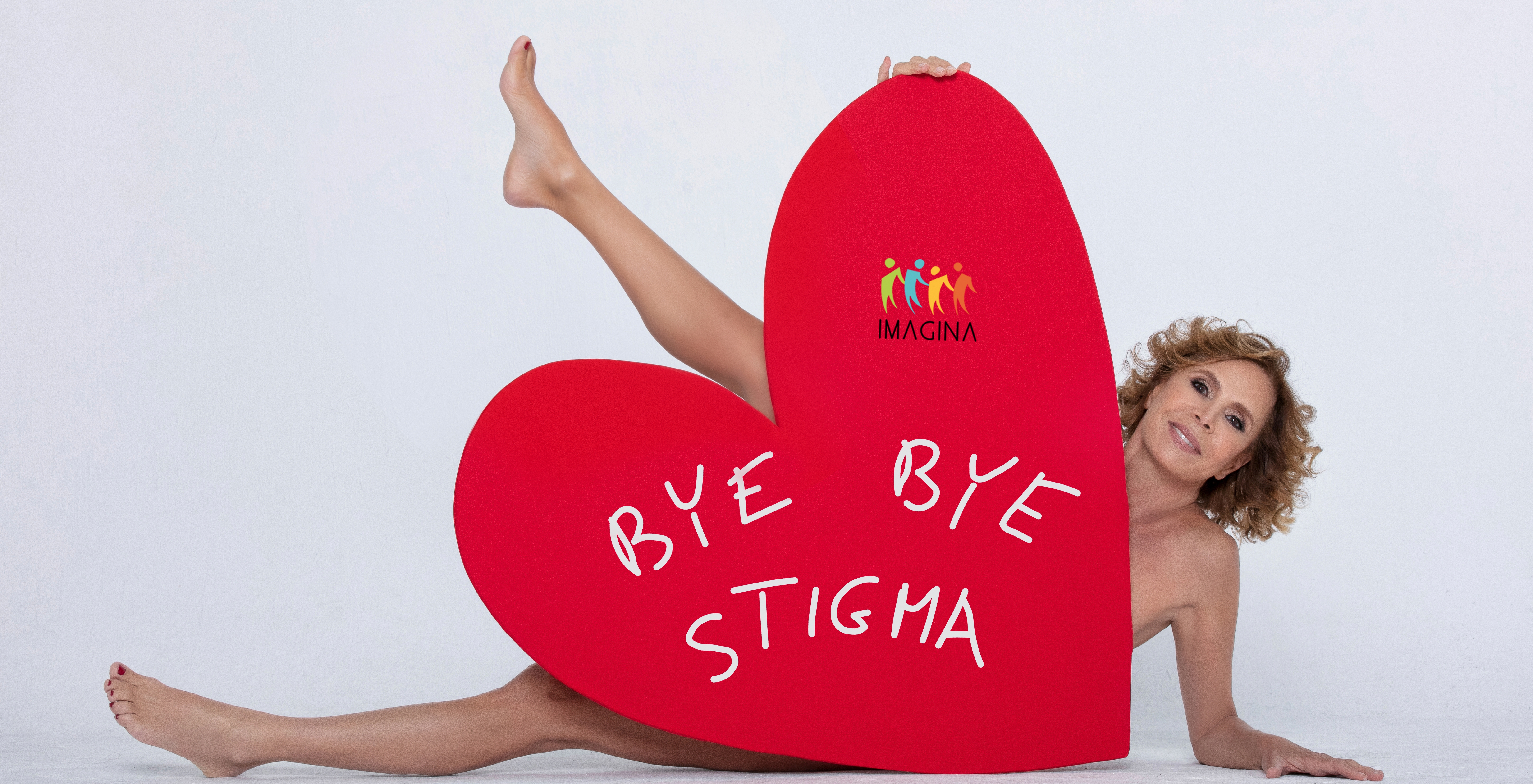 Naked and covering her body with a heart-shaped poster in which the message is read “Bye, bye, stigma” (Goodbye, stigma). This is how the designer Ágatha Ruiz de la Prada appears in the last campaign of the NGO Imagina Más on the occasion of the World Day of the Fight against AIDS, which is celebrated this Wednesday. The action, composed of three photographs that emulate the famous image that the artist Keith Haring took of the actress Brooke Shields, seeks to attract the attention of the public to help raise awareness about the virus and the disease.

The dressmaker is just the latest in a long list of celebrities with whom organizations that are part of Cesida have worked, such as Imagina Más. Iván Zazo, director of this NGO, explains why they resort to these familiar faces: speaker, the message penetrates society more than if it is launched by a person with HIV ”. Mónica Naranjo, Verónica Forqué or Javier Ambrossi are some of the names that have contributed to the cause. “We select people who share our values,” says Zazo about choosing these faces. “We see that they have previously worked in solidarity campaigns, that they are references in their profession and that they have a track record. Also that they believe in what they are going to do ”. He gives an example to Lolita, who in 2016 also undressed for the organization’s campaign. “When we met with her, she knew what HIV was, what it means to be undetectable positive…” she says. She elaborated on her commitment then in the magazine S Fashion: “I have done it because AIDS has washed away many friends. Because I think we are getting used to the disease and we must not lower our guard. You need information and remember that this is not a problem for just a few. It can happen to anyone. It does not matter if you are homosexual or not. That it doesn’t matter if you have contact with drugs or not. It is everyone’s problem. We are all vulnerable. It is necessary to undress before so much prejudice ”.

Actor Marc Clotet (Mothers Love and life; The sleeping voice) thinks the same as Lolita. “A lot of people still think that they can’t touch it, it reduces it to certain sectors,” he says on the phone from Argentina, where he is recording the series. Without tags with his wife, Natalia Sánchez. The interpreter is probably the Spanish celebrity most involved in this issue. From caste it comes to the greyhound. He is the son of Dr. Bonaventura Clotet, an eminence in Spain in the fight against AIDS and in research to find a cure and a vaccine against the virus. “Since I can remember I have known this pandemic of the 20th and 21st centuries,” says Marc Clotet. “My father has dedicated himself body and soul to finding a solution since the first case appeared in 1981, and he has always shared his work with the family. Many patients have ended up becoming friends, and in hard times, unfortunately at first, many passed away. Seeing the pain in my father’s eyes marked me, I never considered not participating, not helping to raise funds and make visible ”.

Zazo, for his part, confesses that it is not so easy for celebrities to get involved with HIV, and recalls a personal experience: “An actress fell from a campaign because she feared that the public might think she had HIV.” Informed about this episode, Clotet is surprised and does not feel anything identified. “There is the stigma. I’m not afraid to participate, it doesn’t occur to me that they might think I have it, and if they do, it’s none of my business. If I had been infected, I would do anything for people to give their voice to combat the stigma ”. The actor believes that this example shows that there is a lot of work ahead. “We are not in the worst times, but we are still afraid, and on top of it a guilty fear, of shame for having been infected, what will they say”. Zazo lives these cases in his organization: “We speak with people who do not dare to tell their parents or brothers that they have contracted it because they fear what they will think of them, that their concept will change.”

For this reason, Clotet lends himself to talking about the subject at any time, even in the middle of a shoot, he looks for a space to address it. “Talking about it normalizes it. Today we are fortunate that, with current treatments, you can have a full life. Of course, you must have access to medicines, my father told me that thousands of people in the world continue to die because they do not reach certain countries. And when a patient manages to be undetectable positive, it becomes untransmissible, it does not infect other people ”, he emphasizes.

Zazo would like, yes, in Spain some famous person with HIV would show his face. “It would help a lot to change the perspective on the virus. It has happened with the LGTBI collective; When Jesús Vázquez began to present entertainment programs, he came to all the classrooms and they saw that he was a person like the rest. If a familiar face came out saying that it had the virus, it would be seen that it is a healthy person, and not a zombie ”. In the United States, celebrities such as Charlie Sheen, Jonathan Van Ness or Billy Porter have already exposed their medical condition.

Involving celebrities, while important, is not enough. Clotet gives a little slap on the wrist to the public authorities. “A good sex education is needed in schools, that it is properly informed, something that is being neglected. The more knowledge, the better you tackle any topic. And public prevention campaigns, I haven’t seen any for a long time ”, he highlights. Also that more is invested in research to find a cure and a vaccine. “To all those who question the money that is allocated to the fight against HIV, because they think that it does not go with them, I would say that everything that has been investigated on this virus has helped it to develop with so much quickly a vaccine against the coronavirus. The more that is investigated, the better prepared we will be in the face of any adversity ”.

Zazo thinks similarly, and highlights new prevention methods. “Apart from the condom, there is now also PrEP [profilaxis prexposición], which prevents infection. And it should be said that having sex with undetectable HIV-positive people is safe ”. It considers that there is a lack of political will to treat the issue with due seriousness. “It is not enough to give a course on how to put a condom on to a 14-year-old boy. The current average age of infection is 35 years, therefore, the information offered is not enough. From the public powers they block sexual education; the Madrid center of reference for infections and venereal diseases, the Sandoval center, is only open in the morning; access to HIV treatment for immigrants is difficult… We must be aware that if left untreated, they can infect more people. We are facing a public health issue ”.

Now, with the campaign launched this Tuesday with Ágatha Ruiz de la Prada, they hope to reach more people. “It happens a bit like with Lolita, who made us leave our comfort and influence zone, which is the collective [LGTBI]”, Zazo confides. “That a person who appears on the pages of Ten minutes, the Soon or the Hello! give your voice to destigmatize the virus extends the message outside our environment. There is no gold that pays for this ”.