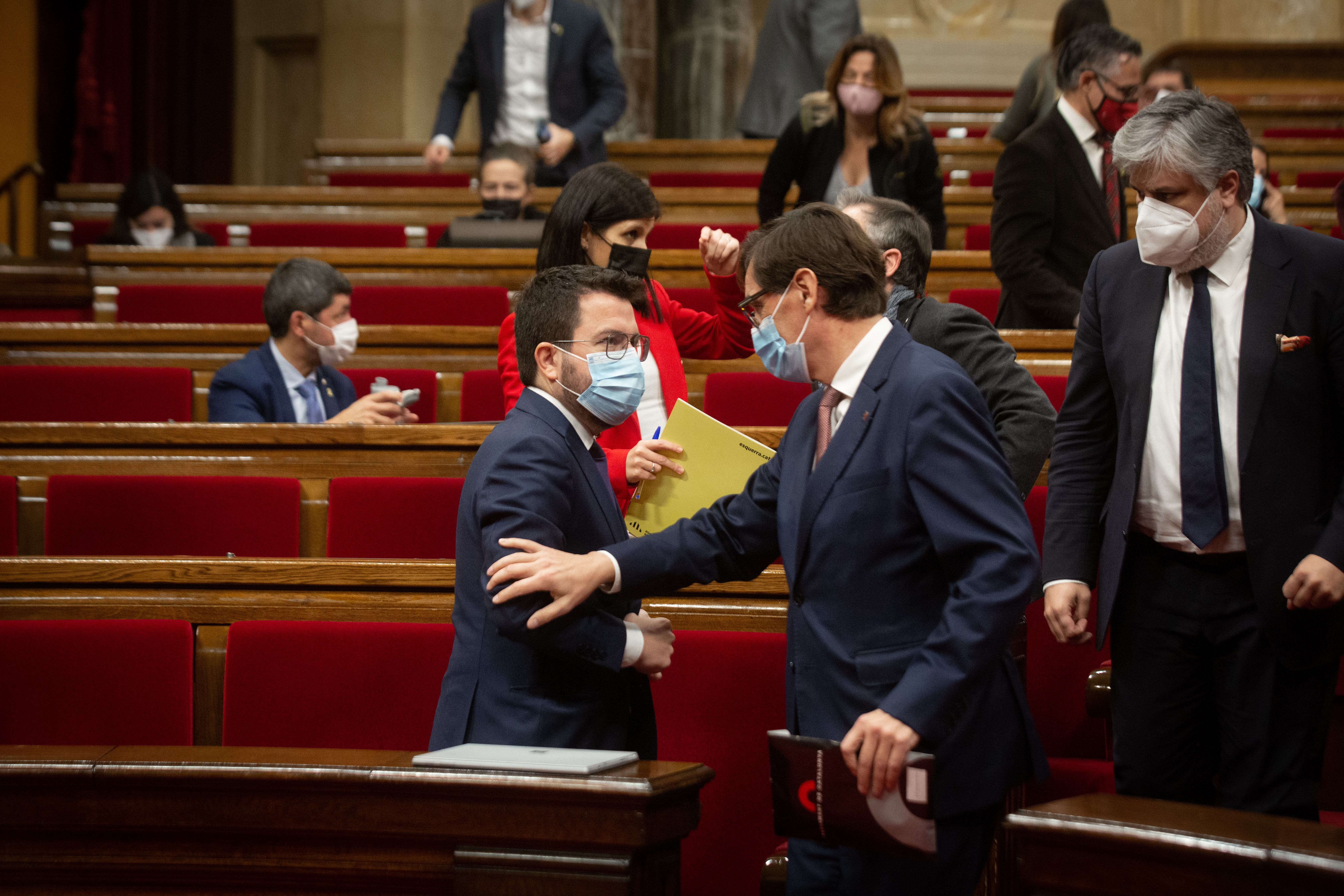 Signs of a change in the political climate in Catalonia have accumulated in 2021. Esquerra Republicana (ERC) and Junts, the power coalition in the Generalitat, and the main opposition force, the Partit dels Socialistes de Catalunya (PSC), have sealed this week a renewal agreement in the institutions that underpins a new era in which the dialogue between blocks is imposed until recently immovable.

The frustrated unilateral race for independence polarized the Catalan political system and generated a chronification of problems in the functioning of the institutions. A tangible consequence is the 25 public bodies that have been in office for years, in some cases since 2015, with a hundred positions in office, pending renewal by qualified parliamentary majorities. PSC, ERC and Junts got down to work this month to solve this anomaly.

The three largest parties in Catalonia, which account for 72% of the seats in the autonomous Parliament, have agreed to renew seven institutions, the most significant, the Governing Council of the Catalan Audiovisual Corporation (CCMA), the Síndica de Greuges —The Ombudsman—, the Council of Statutory Guarantees and the Audit Office. In the case of the CCMA, the entity that manages TV-3 and Catalunya Ràdio, the independence coalition has assumed a reformulation plan for Catalan public media promoted by the PSC and which emphasizes the need to improve plurality of these media. “What the PSC has achieved with this pact is more than what Ciudadanos (Cs) achieved in the previous legislature,” said Socialist deputy David Pérez.

Cs was the main opposition party in the last legislature. With the attempt at unilateral separation from Spain still very recent, both the party led by Inés Arrimadas and ERC and Junts remained in their trenches and with their swords raised. The wounds left by the process They are already healing despite the fact that Catalan nationalism continues to argue that Spain is in the hands of authoritarian powers. Democracy will come, according to the thesis of ERC and Junts, when Catalonia can hold a referendum on self-determination and when an amnesty law is approved that exonerates those convicted of causes related to independence, in addition to allowing the return to Spain of the former president of the Generalitat Carles Puigdemont and its councilors residing abroad to avoid being judged by the Supreme Court.

The truth is that the more time passes after the frustrated unilateral independence of 2017, the easier the rapprochement. Jessica Albiach, leader of En Comú Podem, pointed out to EL PAÍS last Thursday that Catalonia has “launched a new stage”: “On the one hand, we have a new economic paradigm with expansive budgets; now we have to change to a new political paradigm ”. The Commons agreed with the Generalitat for the approval of the 2022 Budgets last Thursday. ERC, for its part, reacted by giving support this Friday to the accounts of the Barcelona City Council, governed by the Commons and the PSC. Even more relevant is the support that the Republicans provide to the central government, allowing the processing of the General State Budgets in exchange for the promotion of productions in Catalan on digital platforms.

Those defeated by the new situation, Albiach pointed out, are “the forces least likely to break blocks.” In the case of the approval of the Autonomous Budgets with the commons, the independence majority that made Aragonès as president of the Generalitat was broken: the CUP refused to support public accounts. Last weekend, the anti-capitalists responded to the “autonomist drift” of ERC and Junts with a document in which they threatened to “destabilize” the Executive.

The leader of the CUP Eulàlia Reguant regretted in the plenary session of the Parliament last Thursday the pragmatic turn of Aragonès: “We have heard that the CUP is the preferred partner. Preferred partner for what? Since the pact of the legislature we have not agreed on anything transcendental. They have settled into the usual politics, the autonomic one, to divide the country with the PSC and with the bosses ”.

Reguant also made critical mention of the pacts signed by the Government and the Generalitat last August to promote the expansion of the El Prat airport and the candidacy of the Pyrenees Winter Olympics. ERC has ended up distancing itself from the airport project, also the Commons, but the rhythm of the music is the same that was released last September with the recovery of the dialogue table between governments to find a political solution to the demands of independence.

The thaw began after the regional elections last February. At that time, the two blocks continued to deny each other bread and salt, but a group of intellectuals, the Pròleg group, which includes references of Catalan socialism such as Raimon Obiols or Laia Bonet, already predicted in an article in EL PAÍS that they they would produce the first steps of “an uncomfortable journey, in stages and of long duration”. The trip, as that text concluded, should lead to the full reconciliation of ERC and the PSC.