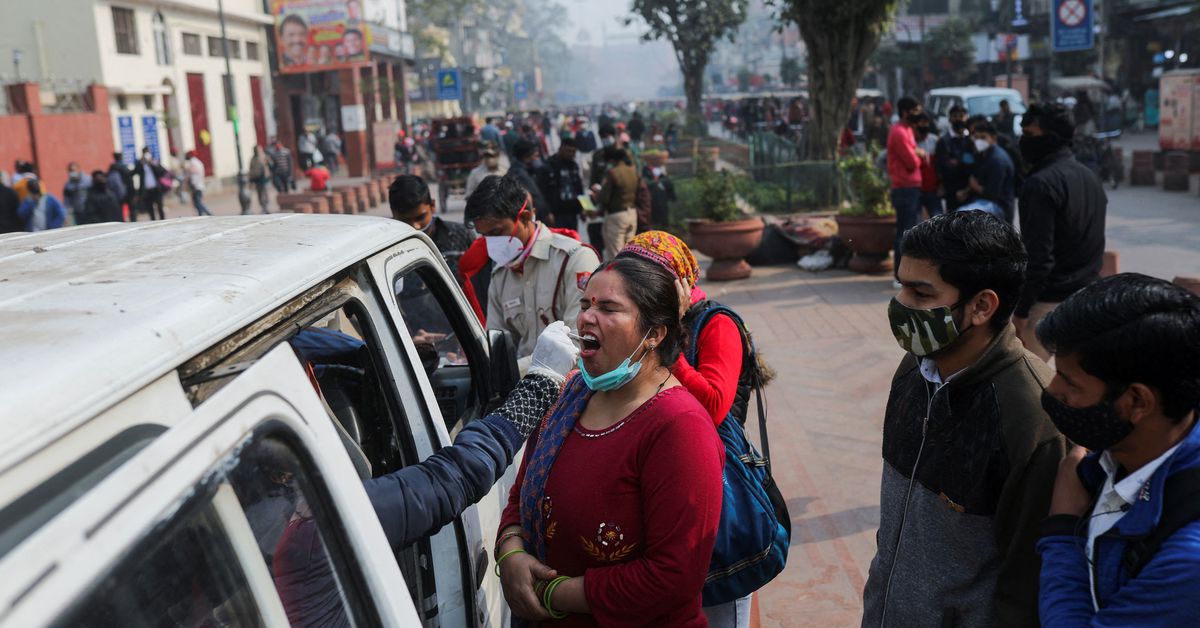 JOHANNESBURG/LONDON, Dec 23 (Reuters) – Two vaccine makers said their shots protected against Omicron as UK data suggested it may cause proportionally fewer hospital cases than the Delta coronavirus variant, though public health experts warned the battle against COVID-19 was far from over.

Similarly encouraging signs about hospitalisation rates emerged from South Africa on Wednesday, but the head of a leading African health agency joined the World Health Organization in cautioning that it was too soon to draw broad conclusions about Omicron’s virulence.

“Let’s be careful not to extrapolate what we are seeing in South Africa across the continent, or across the world,” Africa Centres for Disease Control (CDC) chief John Nkengasong told a media briefing.

Coronavirus infections have soared wherever highly infectious Omicron has spread, triggering new restrictions in many countries.

First identified last month in southern Africa and Hong Kong, the variant is becoming dominant in much of Europe including Britain, where daily new infections have soared beyond 100,000.

In France, daily coronavirus cases – currently close to 90,000 – could rise into the hundreds of thousands in January, a scientific adviser to President Emmanuel Macron said on Thursday, while Germany reported its first Omicron death. read more

In Italy, the first Western country to be hit by the pandemic last year, the National Health Institute said Omicron would soon predominate, while Greece banned public Christmas festivities to curb its spread. Both countries also made outdoor mask-wearing mandatory. read more

But increases in hospitalisations and deaths in South Africa and Britain since Omicron took hold appear to have been only gradual, and AstraZeneca(AZN.L) and Novavax(NVAX.O) joined other vaccine manufacturers in saying their shots protect against it.

University of Edinburgh researchers who tracked 22,205 Omicron patients said on Wednesday the number who needed to be hospitalised was 68% lower than they would have expected, based on the rate in patients with Delta.

Raghib Ali, senior clinical research associate at the University of Cambridge, said scientists had warned that, with the surge in UK cases, even a small proportion of hospitalisations could overwhelm the healthcare system.

However, the data was encouraging and “may help justify the government’s decision not to expand restrictions on social gathering over Christmas in England”, he said.

A separate South African government-backed study, yet to be peer-reviewed, on health workers given the Johnson & Johnson (JNJ.N) vaccine identified “clear and early de-coupling” of hospitalisation from Omicron cases compared with Delta.

However, the CDC’s Nkengasong said the NICD data, suggesting Omicron was 70%-80% less severe than Delta, should be interpreted “with a lot of caution”.

See also  How many children have to die before America changes its gun laws?

“This is early days and public health practice is local,” he said, adding that particular factors such as the young median age of the South African population could be in play.

On Wednesday, the WHO’s technical lead on COVID-19, Maria van Kerkhove, said data on Omicron was still too “messy” to draw firm conclusions.

Case data on the spread of Omicron due later on Thursday from the UK Health Security Agency is expected to offer further clues as to its severity.

On Thursday, AstraZeneca said a three-course dose of its COVID-19 vaccine offered protection against the variant, citing data from an Oxford University lab study.

Findings from the study, yet to be published in a peer-reviewed medical journal, matched those from rivals Pfizer-BioNTech (PFE.N), (22UAy.DE) and Moderna (MRNA.O).

Hours earlier, Novavax Inc. (NVAX.O) said early data showed its vaccine – authorised for use by the European Union and WHO but yet to be approved by the United States – also generated an immune response against Omicron.

As financial markets welcomed the signs that Omicron might be less severe than feared, equities – notably travel- and hospitality-related stocks – extended a rally while safe-haven bonds and currencies eased. read more

In some countries, meanwhile, the older Delta variant continued to spread.

The coronavirus death toll in Russia, where officials had detected only 41 Omicron cases, passed 600,000 on Thursday, Reuters calculations based on official data showed, after a surge of Delta-linked infections. read more

Only the United States and Brazil have recorded more coronavirus deaths.

In India, where daily infections hit close to 7,500 on Thursday with just 23 Omicron cases, Prime Minister Narendra Modi was to meet with state chiefs to discuss how counter a possible Omicron surge ahead of the festive season. read more

Eikon users can click https://apac1.apps.cp.thomsonreuters.com/cms/?navid=1063154666 for a case tracker.

Reporting by Reuters bureaux around the world; Writing by John Stonestreet; Editing by Catherine Evans, Edmund Blair and Mark Heinrich