Skip to content
Home News Carlos Alcaraz: “I don’t like being compared to Nadal, but if they do, it’s that I’m doing something right” | The spar 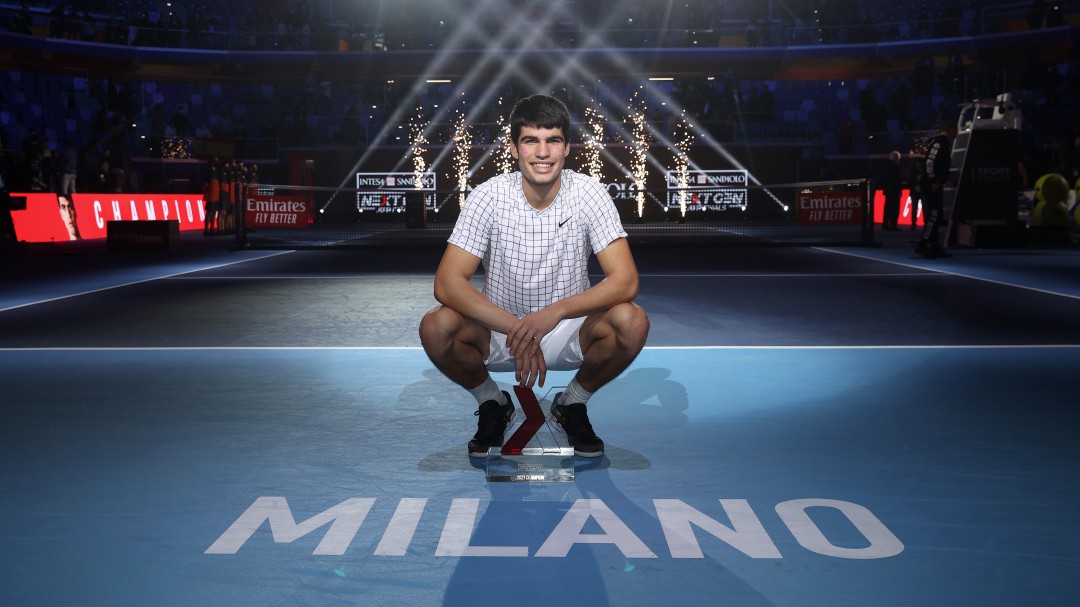 Carlos Alcaraz finished almost 150th in the world last year. He’s going to end this year at 32. He has won two titles and has become the best tennis player under 21 after winning the NextGen ATP Finals. He has beaten, among others, tennis players of the stature of Tsitsipas, Berrettini, Korda, Goffin, Murray … You are only 18 years old, but the Murcian tennis player is already a reality. For the first time, Carlos Alcaraz goes through El Larguero, with Manu Carreño, to review a dream 2021 to which he wants to put the finishing touch with a Davis Cup.

It is an honor to greet the Master of the Under 21s. Carlos Alcaraz, very good. Congratulations first.

Tired or have you already had time to rest a bit?

Well, they have been very intense. I have slept a little, right now I am between flights and others a little tired but there will be time to rest.

Well we already saw you, by the way, sleeping on the next court during the tournament before your game, taking a nap …

Yeah yeah (laughs) … it was in the gym. I try to take a nap before the games at every tournament.

How much are you sleeping on average?

Well … it will have been 3 and a half hours one day and the other 6 hours.

Well, but you are tired and satisfied. You got the title, which was the goal.

I am very happy to finish the year winning the NextGen ATP Final and more playing at the level that I have done. I have really enjoyed the tournament.

Now comes the Davis, which is the icing on the cake, but … do you see yourself above what you expected?

Note that Rafa is still working to improve, Djokovic too … you have the whole race ahead of you. What would you like to be better at?

I would like to improve off the track. On the track we are four hours a day, the rest of the hours we spend off the track, we also have to take care of all the details to the millimeter. Every detail counts and there I have to improve a lot. I mean to rest well, eat well, be orderly … all that kind of thing.

A bit of what our parents have always told us.

(Laughter) Yes, yes … in the end, all that our parents have always stressed to us is important and in the life of another athlete. Rest well, recover well … pouring gasoline into the body is very important to be able to perform later.

I have a question. Almost everyone talks about you as Nadal’s successor. Do you like that or not so much?

Hey and people already recognize you, right? Yesterday you were in Seville and you already notice that people ask you for photos and so on.

Carlos, how many times has Ferrero had to tell you, because you have a mentor who knows them all, keep your feet on the ground?

Another thing that strikes me. A technical question. At the US Open, where you reached the quarterfinals and couldn’t compete due to physical problems, Ferrero told us that you had more capacity to improve your service. The way you hit him from the forehand is brutal, but I almost like the backhand better. But it is that the other day, in Milan, you did 220 kilometers per hour. There are not many Spanish tennis players who can do it. Are you like a sponge?

Now you said that a mini break because the Davis arrives. I don’t know if you have hope of playing any of the singles.

So far they haven’t told me anything. That will be seen. It depends on the training sessions, on the players … but whoever plays is going to measure up. There is Bautista, there is Carreño … They are very great players. I’m going to enjoy being there. We’ll see what the captain decides.

I think Carlos, Manu, blushes a bit anyway. The story is that this begins on the 25th, Spain plays on the 26th against Ecuador and on the 28th against the Russia of Medvedev, Rublev, Khachanov … We have Bautista and Carreño who are great ‘singlists’, we have Granollers and Feliciano for him doubles, and Carlos Alcaraz who does ‘singles’, does doubles … I think he’s going to fit in very well with the people of Madrid. If he plays an individual, Madrid is going to go crazy with Carlos.

I am delighted with what he touches me. I have a huge illusion of playing a single in Madrid. I think that having such an experience would be wonderful. It depends on the captain, but I am ready for anything.

18 years it seems that they are more on the track and off. Like Gavi, with 17 years. What did you think of the game? That you were in La Cartuja.

We played a lot. It is not easy to play with so much pressure and I think Spain has done the job. Gavi is a brutal talent. With 17 years. On several occasions I heard the entire audience shouting his name. It’s amazing how he managed the emotions.

Almost a child, like you, you take a few months. Are you very football fan?

I wanted to see it. I’m a soccer fan, I’m not a super fan, but I like it. When I’m in the tournament, I don’t change a training session for the games, but I like to watch it. I am from Real Madrid and I like to watch the team’s games. I always like to see Spain, so I try to see them.

The most important person in your life.

I don’t have one, my entire family.

Be number one in the world.

Does that make you more excited than winning a big one?

Yes. I would be more excited to be number one in the world.

Hey, one more. The other day they told me. Alcaraz best on earth. But I see you on the fast track and … do you have a favorite surface?

The fast track suits me better, but I adapt well. I like the dirt, the fast track and how little I have played on grass as well.

Do you see the 20 Grand Slam unattainable? The 13 Roland Garros?

Hey, one last curiosity … with the golf driver … How many meters do you reach?

Honestly, I’m just starting out (laughs). I am quite bad, I have tried myself but I still have not been able to give it, I am very bad. I am more than going straight and less meters.

Well, we leave Rahm the golf clubs and we leave you the tennis racket. A hug and good luck.

A hug, thank you.