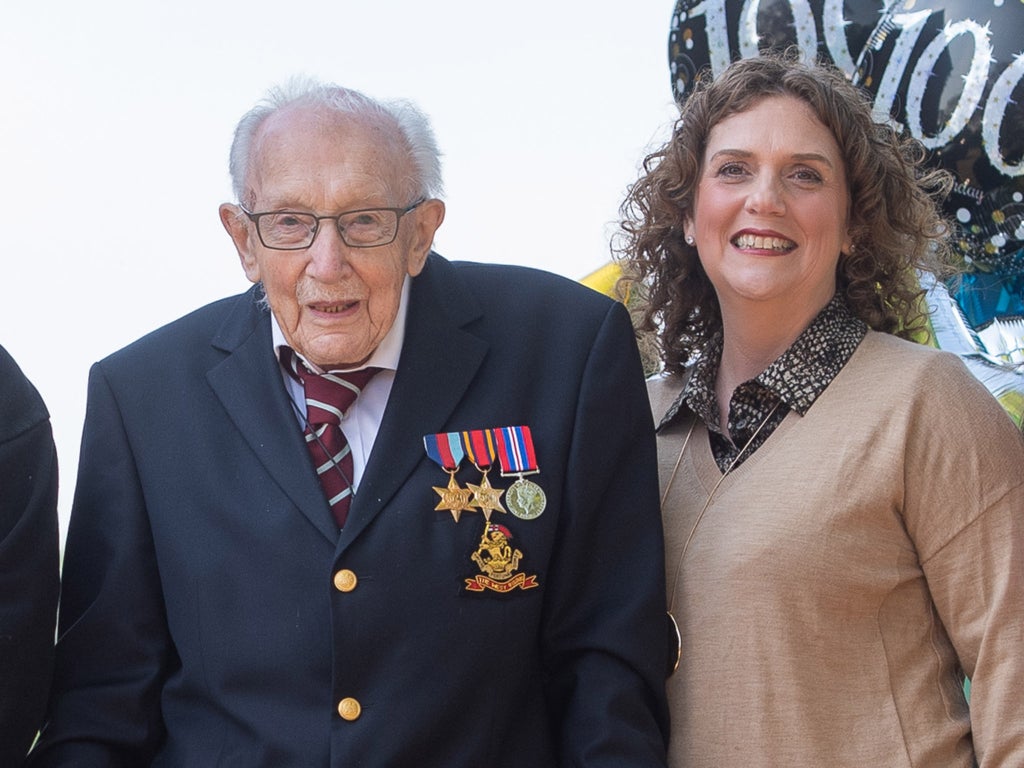 A fundraising event billed “Captain Tom Day” has been postponed in the wake of disclosures about the finances of a charity set up in the name of the veteran, The Independent you have been told.

Dame Esther Rantzen, who has been partnering with the Captain Tom Foundation, revealed the day – planned for June – was on hold while the Charity Commission looked into the organization. She also indicated she might cut ties with the charity if the watchdog’s findings were negative.

It comes after accounts disclosed that the foundation had paid tens of thousands of pounds to firms run by the late veteran’s daughter, Hannah Ingram-Moore, and son-in-law.

The Independent also reported how it had been told part of the watchdog’s compliance case – launched last March – related to a request from the foundation to appoint Ms Ingram-Moore as CEO on a six-figure salary, equating to about a tenth of its first-year income. It is understood that the Charity Commission blocked the appointment last year. The foundation said Ms Ingram-Moore “took the decision that the CEO role was not something she wished to pursue”, although she was appointed on an interim basis.

The Captain Tom Foundation was established in May 2020 after former army officer Captain Sir Tom Moore – who died in February last year – raised nearly £39m for NHS charities by walking laps of his garden.

It announced Captain Tom Day last December, partnering with Dame Esther. A statement on the charity’s website says: “In 2022, we are excited to announce our first Captain Tom Day – a day for us to celebrate our older generation and raise funds for organizations who support them.”

Ms Ingram-Moore has separately said the day was intended to replicate Children in Need or Comic Relief, but focused on older people.

But after details emerged about the Captain Tom Foundation’s finances earlier this month, Dame Esther – a celebrated campaigner who founded Childline and The Silver Line – said she had spoken to Ms Ingram-Moore. She explained: “She said that while the Charity Commission were looking into all the finances of the Captain Tom Foundation, it would probably be better to postpone hopes and plans for Captain Tom Day, which we had hoped to be able to set up in June. of this year. And I agreed that it might, given the media’s ongoing interest.”

The accounts published earlier this month detailed that £54,039 had been paid by the foundation to two companies run by Ms Ingram-Moore and her husband Colin. The accounts, which described the transactions as reimbursements, also showed that the foundation had spent more money on management costs than was given to charities in its first year.

In the event of findings against the charity, Dame Esther said: “The ideal outcome for me would be that the Charity Commission would say mistakes were probably made, but they were made in good faith and… the charity has learned from it and that we could go and we can actually make a public statement explaining what went wrong, how it went wrong and how we’re going to protect ourselves from anything going wrong in the future, and then to carry on. Because I still think that calling… my major fundraiser for older people Captain Tom Day would actually create enthusiasm. But, but… any other outcome… would be very, very sad…”

Pressed on whether she would want her name associated with the charity if issues were raised with its finances by the watchdog, she said: “Well, obviously I’ve got… a lot at stake with Childline and The Silver Line, and there’s no way I would jeopardise… the way the public trust those charities so… I’ve got to protect my own reputation, absolutely.”

She said there were “absolutely” circumstances in which she would walk away.

Dame Esther said she became involved with the foundation after Ms Ingram-Moore heard her speech in October at the “women of the year” lunch that mentioned the failure to launch an equivalent to Children in Need for older people. She continued: “She had been trying to set up some permanent memorial to what her father de ella did and she got in touch with me and said, ‘How about creating Captain Tom Day?’ And I was thrilled with the idea because it seemed to me that her father broke through all the stereotypes… he appealed to people of every age, he appealed to donors around the world, his courage, fortitude, sense of humor, wisdom, was just so impressive that the world fell in love with him.”

Dame Esther said the foundation had written to all contacts to notify them of the postponement.

last week, The Independent reported how it was told that the foundation tried to appoint Ms Ingram-Moore as its CEO on a six-figure salary before the Charity Commission intervened to block the move. It is understood the charity wanted to pay her in the region of £150,000 for her role.

The foundation said that during trustees’ discussions with the watchdog, Ms Ingram-Moore “took the decision that the CEO role was not something she wished to pursue” so she could focus on other commitments. She was subsequently appointed on an interim basis as CEO from August last year until April. In a statement, the chair of the trustees said the “revisited” salary Ms Ingram-Moore received as interim CEO was “categorically not six figures”. However, there was pointedly no denial that a six-figure salary had been put forward.

A Charity Commission spokesperson said: “Our engagement with the trustees of the Captain Tom Foundation on its set-up and governance arrangements continues. We cannot comment further at this time”.