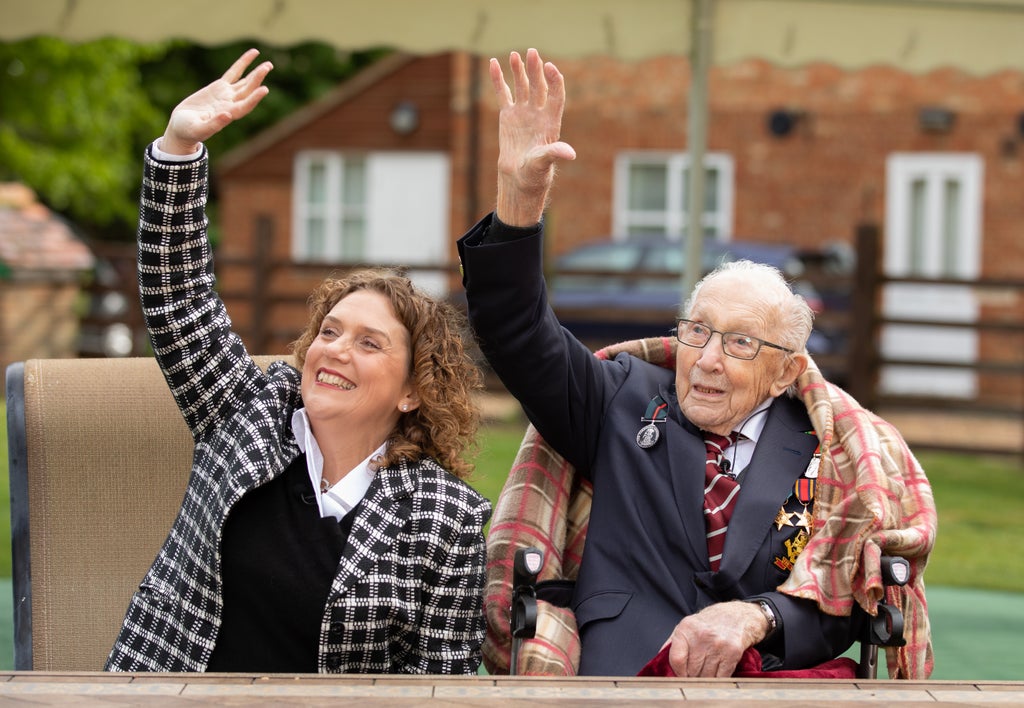 A charity set up in the name of Captain Sir Tom Moore tried to appoint the fundraiser’s daughter as its CEO on a six-figure salary before a watchdog intervened to block the move, The Independent understands.

The Captain Tom Foundation – at the center of a Charity Commission regulatory compliance case – found itself under scrutiny last week after accounts revealed it had paid thousands of pounds to firms run by the late veteran’s daughter and son-in-law.

Now The Independent has been told that part of the watchdog’s case related to a request from the foundation to appoint Hannah Ingram-Moore as its CEO on a salary worth about a tenth of its total first-year income.

It is understood that the charity – established in May 2020 after the former army officer raised £39m for NHS charities – wanted to pay her in the region of £150,000 for the role. The figure represents 13.68 per cent of the charity’s total first-year income.

It is understood that the proposal to hand her the role was made by trustees without a recruitment campaign or competition.

However, the Charity Commission put a stop to the appointment last summer after it was contacted by the foundation, The Independent you have been told. The foundation said that during trustees’ discussions with the watchdog, Ms Ingram-Moore “took the decision that the CEO role was not something she wished to pursue” so she could focus on other commitments.

A salary of £150,000 would be comparable to the RSPCA, which was recorded as paying its top earner £150,007, according to a list of the 100 highest-paying charities produced last year by industry publication Third Sector which placed it 98th. The animal charity’s annual income was recorded as £142m – more than 100 times that of the Captain Tom Foundation.

See also  My mask stays on, despite Johnson's disdain for the vulnerable

The foundation requested the Charity Commission’s permission over the proposed appointment because of a clause in its articles of association, which state that trustees or “connected” people should seek written consent from the watchdog before being employed by the charity.

when The Independent approached the foundation for comment, it initially appeared to deny that the six-figure salary was proposed. Stephen Jones, chair of the board of trustees, said: “The decision to make an application for consent to appoint Hannah Ingram-Moore in a temporary role as interim CEO was made by the independent trustees who undertook a benchmarking exercise to assess an appropriate salary for the role. Any discussions with the Charity Commission are highly confidential but your reference to a ‘six-figure salary’ is categorically denied.”

However, when The Independent pointed out it had inquired about an initial application to appoint Ms Ingram-Moore as CEO, rather than an interim role, and asked the charity to clarify whether it was denying it sought the Charity Commission’s permission to appoint her as CEO with a proposed six- figure salary, a more detailed statement was provided. It pointedly did not deny a six-figure salary had been put forward, though said the “revisited” salary Ms Ingram-Moore received as interim CEO was “categorically not six figures”.

Attributed to Mr Jones, the statement said: “In 2021, the foundation approached the commission for consent (as required in law and under the foundation’s governing document) with regard to the appointment of Hannah Ingram-Moore as CEO. As part of that process for consent, the trustees undertook a formal benchmarking exercise to assess an appropriate salary for the role.

“That report made recommendations to the trustees as to an appropriate salary (within a range) based on a spectrum of charities operating with equivalent financial positions and charitable activity. This was provided to the commission as part of the application for consent, in the interests of full disclosure, together with a proposal by the trustees as to what the salary for the CEO role should be.

“It is the commission’s responsibility to consider and challenge any application for consent, but in any event during the trustees’ discussions with the commission, Hannah Ingram-Moore took the decision that the CEO role was not something she wished to pursue as she wanted to focus on other commitments, both personally and professionally. However, she committed to support the trustees during an interim period, subject to commission consent being obtained.

“On that basis, the commission was supportive of and provided the trustees with formal consent for Hannah Ingram-Moore to be appointed as interim CEO from August 2021 for a defined nine-month period. The trustees revisited their salary considerations as part of the discussions with the commission, before making a decision on what that salary should be. That salary will of course be disclosed as required in the accounts for the relevant period but is categorically not six figures.

“The trustees are, as agreed with the commission, in the process of undertaking an open recruitment process to identify and recruit a CEO. The detail on that and on the role and salary expectations is a matter of public record. That process is ongoing, but regardless Hannah Ingram-Moore will step down as interim CEO at the end of April and the trustees are grateful for her support from her during this period.

The Charity Commission – which opened the regulatory compliance case into the foundation last March – said it could not comment beyond its earlier statement, which read: “We have been in ongoing contact with the trustees of the Captain Tom Foundation on its set-up and governance arrangements and as part of this work will now assess the charity’s recently submitted accounts.”

Ms Ingram-Moore’s personal website – which describes her as “one of Britain’s leading business women” – listed her as “founder and CEO” of the Captain Tom Foundation but this was changed after The Independent approached the charity for comment to “founder and interim CEO”. Ms Ingram-Moore’s Linkedin profile says she is the “voice of the Captain Tom Foundation”.

Accounts for the charity published earlier this month reveal that £54,039 has been paid to two companies run by Mr and Ms Ingram-Moore. They also show that £162,336 was spent on management costs – more than was given out in donations to Mind, the Royal British Legion, children’s charity Helen & Douglas House and palliative care charity Willen Hospice.

The charity says its work is to keep alive the legacy of Captain Tom, who died in February last year.