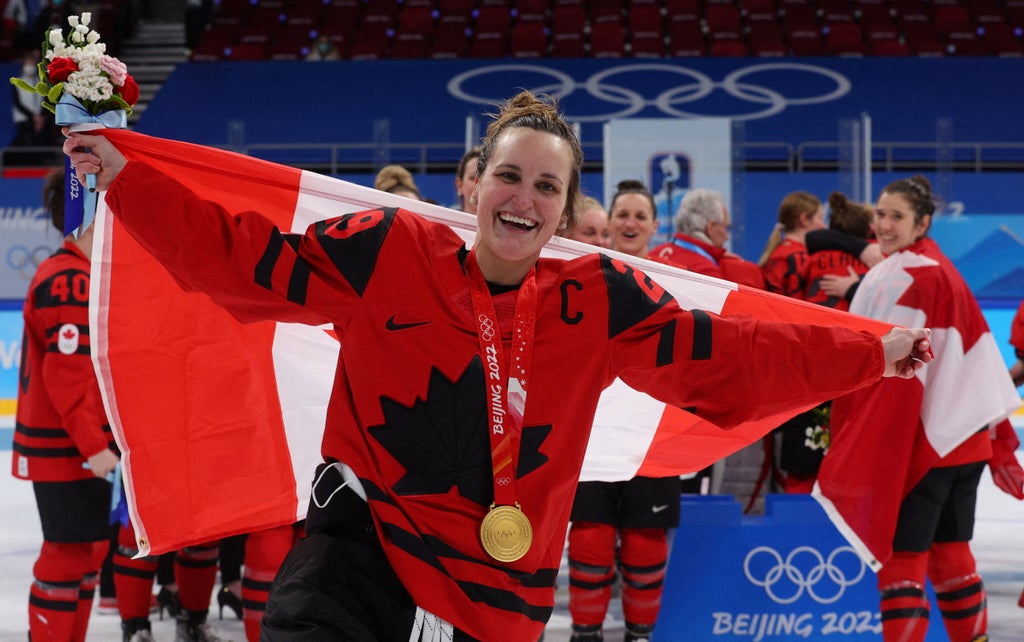 It wasn’t really that close and there were certainly no cigars.

Twelve years ago in Vancouver, after winning women’s Olympic hockey gold against the USA, Marie-Philip Poulin, then just 18, chugged back a lager – even though it was illegal for her to drink – while teammates sparked up their stogies in celebration.

It was a story that really offended no-one but the International Olympic Committee who, as is often their way, got rather piously po-faced about the whole thing.

Dubbed ‘Captain Clutch’, she assisted the first goal and scored the second and third in a 3-2 final victory over the USA, watching the dying moments from the sin bin after the US had reduced the deficit with just 12 seconds remaining.

“It’s just so good, it’s a great feeling,” she said. “It was one hell of an effort and this is a special sort of redemption.

“I don’t know what’s happening, there is some angel up there. This group makes things easy. Celebrating each other’s success, being on the same page, from staff to player, one team. It’s huge.

“Since 2018, we have been putting in the work. To be rewarded with the gold medal makes it all worth it.

“I just got shivers. It feels very good, last time was very hard. You take some time to reflect on what you need to do better as a group and personally. When you surround yourself with good people, good things happen. We are resilient and we were going to put in the past and win that gold here.”

Since women made their ice hockey debut in Nagano, Canada they have won four golds and two silvers and never failed to make the final.

In this tournament they scored an Olympic record 57 goals in seven games and conceded just ten. Through the group games Canada outshot rivals 118-44 and they boast eight of the tournament’s top ten point leaders.

Their long-established rivalry with the USA makes this something of a two-team affair, though the Americans were the defending champions from PyeongChang and the last two Olympic finals had been decided in overtime and a shoot-out.

Indeed four of the team’s nine previous meetings, including the recent world final, had required overtime to settle.

They are the undisputed superpowers of women’s hockey but Canada now hold a decisive upper hand in this ‘Cold War’.

Troy Ryan’s team is packed with stars but it’s Poulin who is most revered, perhaps because she’s scored twice in all four of her Olympic gold medal games.

They said this campaign was not purely about avenging that shoot-out defeat from four years ago, though it was hard to believe them.

“Marie is a special player, an even more special person and just a great leader for our team,” said Ryan.

“No matter how big the occasion, pressure just doesn’t seem to faze her. I think the bigger the game, the bigger her performance of her. That’s just a remarkable talent and an inspiration to all her team-mates of her. ”

Canada’s domination of this women’s hockey tournament has led some to unfairly question the sport’s place at the Games.

But calls for the sport to be scrubbed is clickbait fodder and ignores the fact the IOC, constantly striving for gender parity in their Games, simply aren’t going to let women watch at home while the men fight it out.

It’s also worth noting at the 1924 Olympics, Canada’s men progressed through their group scoring 85-0 in three games, playing the USA in the final, after they’d advanced 52-0.

Nearly a century later and – deprived of their star NHL assets – both powerhouses were dumped out of men’s competition in the quarter-finals here by Sweden and Slovakia respectively.

Progress can be slow but sometimes you need to be in it for the long haul.