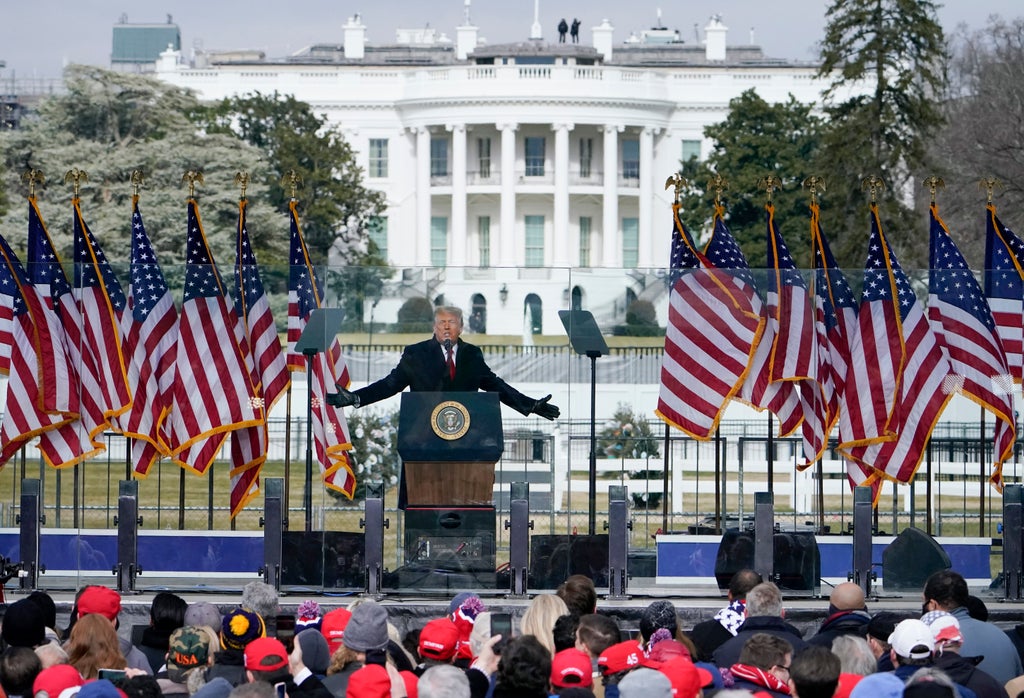 A man charged in connection with the riots at the US Capitol on 6 January 2021 has requested that Donald Trump testify in his defence, arguing that the former president’s testimony will prove that the defendant was acting at his direction.

In a US District Court filing on 4 February, an attorney for Dustin Thompson said testimony from the former president would reveal how he “orchestrated a carefully crafted plot to call into question the integrity of the 2020 presidential election and the validity of President [Joe] Biden’s victory.”

A trial will establish that the former president “and his conspirators engaged in a concerted effort to deceive the public, including [Mr Thompson]into believing that American democracy was at stake if Congress was permitted to certify the election results,” according to the filing.

Mr Thompson is charged with entering restricted grounds, theft of government property, and disorderly conduct. He has pleaded not guilty.

A separate court filing on 4 February says that Mr Thompson intends to invoke the “public authority defence,” in which he “knowingly committed a criminal act but did so in reasonable reliance upon a grant of authority from a government official to engage in illegal activity ”.

His defense may also argue that he “honestly believed he was performing the otherwise criminal acts in cooperation with the government,” according to attorney Samuel Shamansky.

“Though not an affirmative defense, such an argument would undermine the government’s burden of proof relative to criminal intent,” he argued.

Testimony from Mr Trump and his allies – including Rudy Giuliani, who is also named in the filing – would show that they “were determined, by any means necessary, to prevent Congress from fulfilling its constitutional mandate to certify the election results,” according to the filing.

The former president was acquitted in his second impeachment trial in Congress over charges that he incited a pro-Trump mob to storm the halls of Congress, fueled by a baseless narrative that the 2020 election was “stolen” from him.

Many of the dozens of defendants charged in connection with the attack have sought to pin the blame on the former president. Judges have routinely shot down such arguments.

An attorney for Joseph Padilla, who is charged with attacking police with a “Trump 2020” sign, pointed to the former president’s rally preceding the attack. An attorney for Jacob Chansley, the “QAnon shaman”, argued that he would not have joined the siege if it wasn’t for the “specific words” of Mr Trump.

An attorney for William Chrestman, an alleged member of the nationalist gang Proud Boys, said that “only someone who thought they had an official endorsement would even attempt” to storm the Capitol.

Nearly 800 people have been arrested in connection with the assault on Congress.

More than 225 people have been charged with assaulting, resisting, or impeding officers or Capitol staff, including more than 75 people charged with using a deadly or dangerous weapon or causing serious bodily injury to an officer, according to the US Department of Justice.