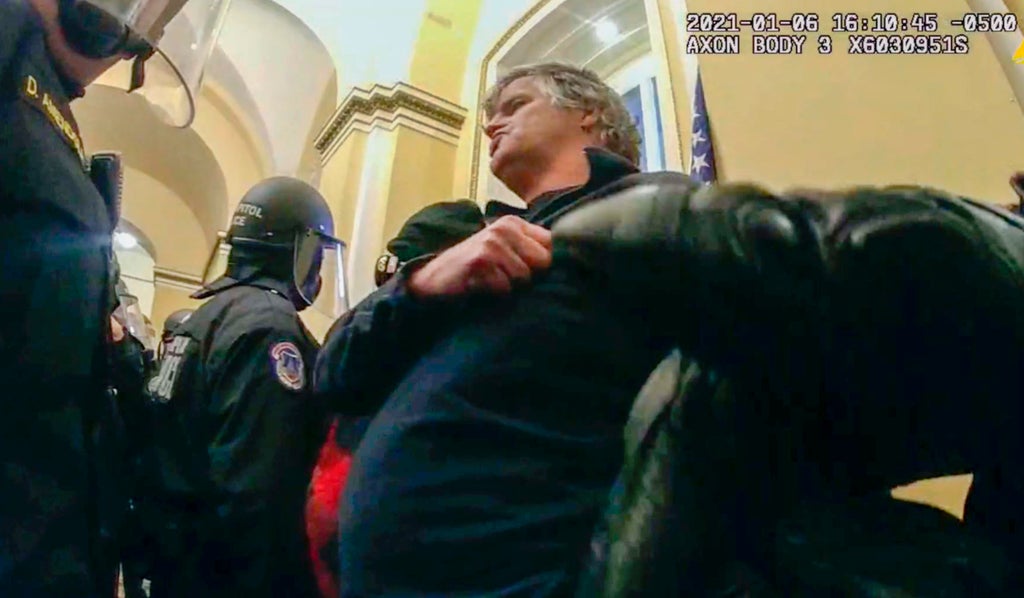 A Seattle man who punched two police officers during last year’s riot at the US Capitol was sentenced to six months imprisonment on Thursday, as the Justice Department reached a milestone in one of the largest federal investigations in American history.

Mark Leffingwell, a 52-year-old military veteran who was wounded in Iraq, is at least the 100th person to be sentenced after pleading guilty to a Capitol riot-related charge, according to an Associated Press review of court records.

The judge who sentenced Leffingwell pushed back on a recent Republican National Committee resolution that accused the congressional committee investigating the Jan. 6 attack of leading a “persecution of ordinary citizens engaged in legitimate political discourse.” US District Judge Amy Berman Jackson also lamented that mainstream news outlets are still amplifying the lie that the 2020 presidential election was illegitimate and stolen from former President Donald Trump

“And, worse, it has become heresy for a member of the former president’s party to say otherwise,” the judge said. “It needs to be crystal clear that it is not patriotism, it is not standing up for America, it is not legitimate political discourse and it is not justified to descend on the nation’s capital at the direction of a disappointed candidate and disrupt the electoral process.”

More than 730 people have been charged with federal crimes stemming from the riot on Jan. 6, 2021. Over 210 of them have pleaded guilty, mostly to misdemeanors with a maximum sentence of 6 months imprisonment.

Leffingwell is the fifth rioter to be sentenced for assaulting police at the Capitol. The other four received prison sentences ranging from 41 to 63 months in prison.

Leffingwell told Jackson that he was embarrassed and ashamed.

“It was not something I planned to do,” he said. “Looking back on it, it was like a nightmare.”

Jackson also sentenced Leffingwell to two years of supervised release and ordered him to perform 200 hours of community service.

The judge sentenced Leffingwell to a significantly shorter prison term than other rioters who assaulted police officers. Jackson said she considered the possibility that Veterans Affairs disability payments can be reduced if a veteran is convicted of a felony and imprisoned for more than 60 days.

The judge said it appears that Leffingwell’s benefits could be restored once he is released. But she said she is willing to reconsider Leffingwell’s sentence if his defense attorney demonstrates that she is wrong.

The judge told Leffingwell that he wasn’t just carried along by the crowd or acting impulsively that day.

“You chose this battle, and you patted yourself on the back for your bravery,” she told him.

Leffingwell, who did not have a criminal history before this case, pleaded guilty to an assault charge in October.

Police had been battling rioters at the Senate Wing doors for nearly two hours before Leffingwell arrived there on Jan. 6. As he stood at the front of the crowd of rioters, Leffingwell chanted “Stop the steal!” and yelled “Shame!” and “Join us!” at a line of police officers near the entrance, prosecutors said.

Leffingwell admitted that he punched two Capitol officers in the head as they tried to repel him and other rioters. Neither officer was seriously injured by Leffingwell, who was arrested before he could escape into the crowd. One of the officers assaulted by Leffingwell said the rioter apologized to him after he was apprehended.

Leffingwell served in US Marines before joining the US Army National Guard. He was wounded on duty in Iraq in 2008, according to prosecutors.

“Leffingwell, a military veteran who once defended the Constitution from all enemies, foreign and domestic, willingly betrayed his nation and became an enemy of the United States on January 6,” prosecutors wrote.

Rioters injured more than 100 officers at the Capitol on Jan. 6. The Justice Department says more than 225 riot defendants have been charged with assaulting or impeding law enforcement, but few have pleaded guilty.

Most of the sentenced defendants entered the Capitol but weren’t accused of engaging in violent or destructive behavior. Resolving low-level cases tends to be easier and quicker for prosecutors.

Of the 100 people sentenced so far, 41 have received terms of imprisonment ranging from 10 days to 63 months. That includes two rioters who were sentenced to jail time already served. Just eight defendants have been sentenced to more than one year in prison.

Thirty-two others were sentenced to periods of home detention ranging from one to three months. At least 54 riot defendants have been ordered to perform between 40 and 250 hours of community service as a condition of probation or supervised release.

Collectively, the defendants have been ordered to pay fines totaling nearly $65,000 and nearly $58,000 in restitution. Fixing damage caused by the rioters cost nearly $1.5 million.

Dozens of defendants have trial dates. The first trial for a rioter is scheduled to start on Feb. 28.