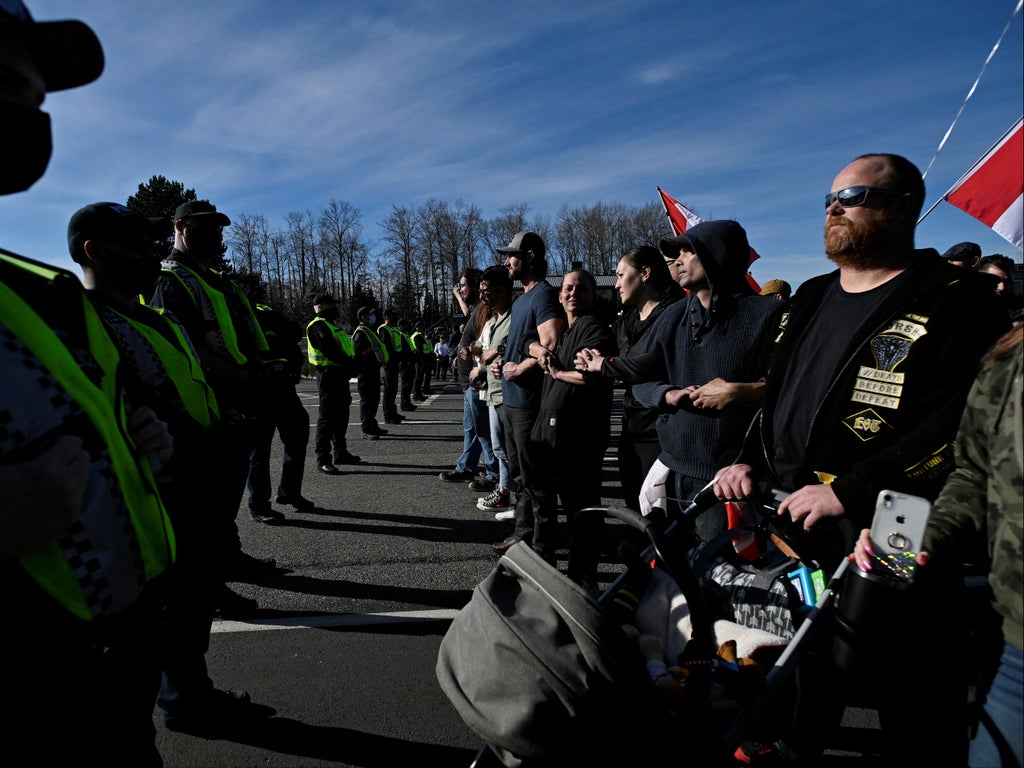 Canadian police have arrested 11 people after they found a massive weapons cache at the US-Canada border within a smaller group aligned with the “Freedom Convoy” protest against vaccine mandates for truckers and other Covid-19 public health restrictions.

Alberta Police said in a statement that they “recently became aware of a small organized group within the larger” protest blocking the border crossing in Coutts, which borders Montana in the northwestern US.

“Information was received that this group had access to a cache of firearms with a large quantity of ammunition,” Alberta RCMP said. “The group was said to have a willingness to use force against the police if any attempts were made to disrupt the blockade.”

The police said an investigation led to the execution of a search warrant in the early hours of Monday morning. Three trailers were searched, leading to the 11 arrests.

“An example of the militant mindset of a small segment of the protest,” occurred at around 8pm, when a “large farm tractor and a semi-truck, both involved in the blockade, attempted to ram a police vehicle,” police said in the statement.

“The police officer was able to reposition and avoid the collision,” law enforcement said, adding that “officers followed the suspects to a location where the protesters were gathered. The driver of the tractor was identified and we are actively working to locate him so he can be taken into custody”.

The farm tractor and semi-truck have been seized.

“The Alberta RCMP wants to emphasize that our primary goal throughout this event has been and will continue to be the safety of the public, as well as our officers,” police added.

The agency said that they “will resume efforts to end the illegal blockade which has prevented access to the Coutts border.”

“We encourage all participants who are involved in this illegal action to leave immediately or relocate to the designated site for the legal protest,” police added.

The border blockade in Coutts, north of Sweet Grass, Montana, started on 29 January. Police issued more than 50 traffic tickets on Saturday and continued issuing them on Sunday.

RCMP Cpl Troy Savinkoff said officers also intercepted and disabled three excavators that were being brought to the protest.

“Had those made their way to the blockade, it would only have compounded the unfortunate situation we’re facing at the border,” he said.

While the protesters are decrying vaccine mandates for truckers and other Covid-19 restrictions, many of Canada’s public health measures, such as mask rules and vaccine passports for getting into restaurants and theatres, are already falling away as the Omicron surge levels off.

About 90 per cent of truckers in Canada are vaccinated, and trucker associations and many big-rig operators have denounced the protests. The US has the same vaccination rule for truckers crossing the border, so it would make little difference if Canadian Prime Minister Justin Trudeau lifted the restriction.

Pandemic restrictions have been far stricter in Canada than in the US, but Canadians have largely supported them. The vast majority of Canadians are vaccinated, and the Covid-19 death rate is one-third that of the US.

Meanwhile, US President Joe Biden, in an interview with NBC’s Lester Holt on Sunday ahead of the Super Bowl, struck a critical tone when asked about those likely to object to the mask mandate at the NFL championship game.