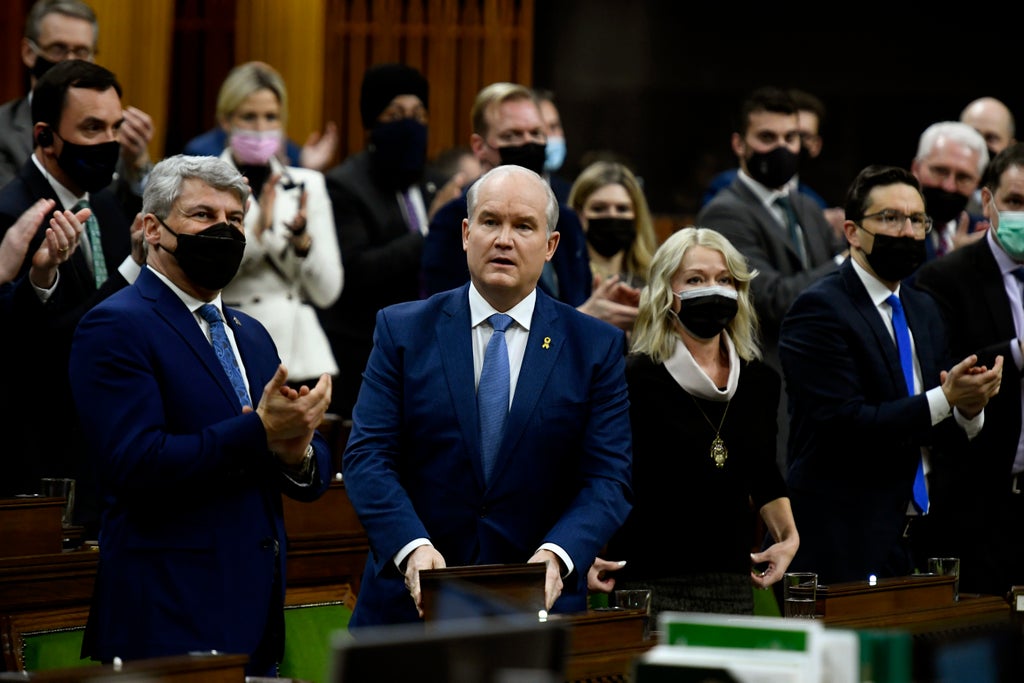 The leader of Canada’s Conservative party is facing a revolt by his party’s lawmakers and could be ousted as soon as Wednesday.

If successful it would be the third main political rival that Prime Minister Justin Trudeau has helped bring down.

Garnett Genuis, a Conservative member of Parliament, tweeted late Monday that one-third of the Conservative lawmakers have signed a letter calling for the end of Erin O’Toole’s leadership.

Genuis went public after many news organizations reported on the revolt. He accused O’Toole’s team of attacking members of his own party.

O’Toole lost the election last fall to Trudeau. He tried to move his party to the center, but alienated his party’s base and was accused of being two-faced.

Whether O’Toole remains a Conservative leader has great implications for the conservative movement in Canada. If removed, the party could swing back further right.

One of the leading candidates to replace him, Pierre Poilievre, met with anti-vaccine truckers who are taking part in a protest in Ottawa Many Canadians were outraged by images over the weekend of protesters urinating on the National War Memorial and dancing on the Tomb of the Unknown Soldier. A number carried signs and flags with swastikas and other Nazi symbols.

“Just talked with hundreds of cheerful, salt-of-the-earth, give-you-the-shirt-off-their-back Canadians at the trucker protest. They choose freedom over fear,” Poilievre tweeted.

O’Toole advertised himself a year ago as a “true-blue Conservative.” He became a Conservative Party leader with a pledge to “take back Canada,” but immediately started working to push the party toward the political center.

O’Toole’s strategy, which included disavowing positions held dear by his party’s base on climate change, guns and balanced budgets, was designed to appeal to a broader cross section of voters in a country that tends to be far more liberal than the United States.

Whether moderate Canadians believed O’Toole is the progressive conservative he claims to be and whether he alienated traditional Conservatives became central questions of the campaign. O’Toole failed to win more seats in and around vote-rich liberal Toronto Canada’s largest city.

Trudeau bet Canadians didn’t want a Conservative government during a pandemic and voiced the concerns of Canadians who were upset with those who refused to get vaccinated.

After last year’s election loss, the Conservative members of Parliament gave themselves the power to vote on O’Toole’s leadership.

In correspondence to Conservative lawmakers Monday evening, Scott Reid, chair of the Conservative party caucus, said the notice he received was valid and more details would follow on when a leadership vote would happen.

Conservative lawmakers are next set to meet Wednesday. A vote on the leadership of O’Toole, whose office did not immediately respond to a request for comment, would happen by secret ballot.

Alberta Conservative lawmaker Bob Benzen, who supported O’Toole previously, said that the leader has flip-flopped on party policy and that it is time for party lawmakers to decide his fate.

“Mr. O’Toole campaigned in the leadership contest as a principled conservative voice that unites the party, However, since Mr. O’Toole assumed the position of Leader, there have been numerous instances of flip-flops and questionable judgement,” Benzen wrote.

I have listed O’Toole’s failure to stand up for the rights of Canadians during the pandemic as one of the problems.

“I feel that the Conservative caucus has given Mr. O’Toole more than enough chances for a course correction to resolve the concerns of many of the grassroots members of our party,” Benzen wrote. “In consideration of Mr. O’Toole’s record as leader, I believe a caucus leadership review is the only way to avoid a dangerous split in the Conservative party that may not be repairable.”