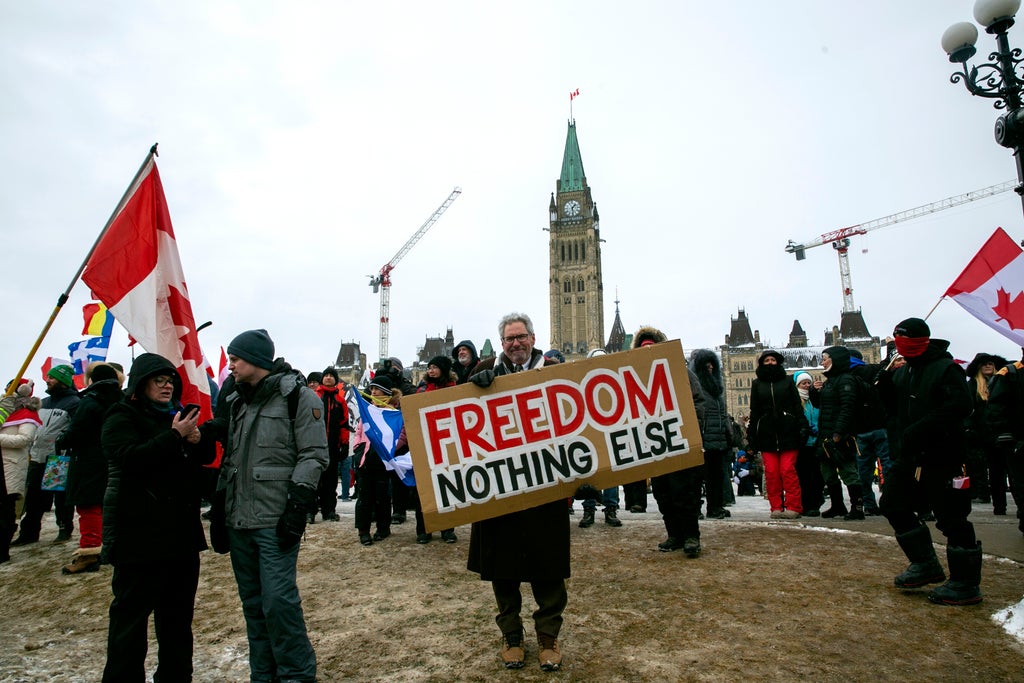 Canadians who have occupied downtown Ottawa disrupted travel and trade with the US and inspired copycat protests from New Zealand to the Netherlands sound a common note when asked about their motivation: Decisions about their health shouldn’t be made by the government.

“We stand for freedom,” said Karen Driedger, 40, who home-schools her kids and attended protests in Ottawa and Windsor “We believe that it should be everyone’s personal decision what they inject into their bodies.”

The refrain isn’t new to a pandemic-weary world, two years after the COVID-19 virus prompted curfews and closures, face-mask mandates and debates over vaccine requirements. Still, the timing of the protests has raised some eyebrows, since they began just as many of the toughest pandemic-era restrictions were being lifted across Canada the US and Europe; Experts say antipathy toward Prime Minister Justin Trudeau is a significant underlying force.

The in-your-face protests that have fueled frustrations around the country and world have been aided by publicity and support from far-right and anti-vaccine groups. And influential Americans such as former US President Donald Trump and billionaire entrepreneur Elon Musk have rallied behind the protesters.

Most Canadians have been supportive of the pandemic restrictions, which health officials have stressed are necessary to protect the public from a virus that has killed at least 5.8 million people globally. The vast majority of Canadians are vaccinated, and the COVID-19 death rate is one-third that of the United States.

Trudeau has labeled the protesters a “fringe,” and authorities have braced for violence because some have expressed hope that the rally will become the Canadian equivalent of last January’s riot at the US Capitol by Trump supporters.

The Canadian “freedom convoy” was announced last month by a group founded by a QAnon conspiracy theory supporter and other organizers, and includes the former leader of Alberta’s far-right Maverick Party.

Protesters who spoke to The Associated Press this week defended their actions and argued that they represent many more frustrated residents.

Don Stephens, a 65-year-old retired graphic designer, said he’s come into Ottawa twice to show support for protesters there. He views them as representatives of a “silent majority that had been longing to have their voice heard.”

Mat Mackenzie, a 36-year-old trucker from Ontario, said he’s been among the protesters in Ottawa for 15 days, feeling “a duty” to show his opposition. Citizens should be in charge of making decisions around masks, vaccines and other COVID mitigation efforts, not government officials, he said.

“I can tell you 90% of truckers here are likely vaccinated. We’re here for freedom of choice,” Mackenzie said. “And that’s what we’re here to fight for.”

Michael Kempa, a criminology professor at the University of Ottawa, said there are two faces of the protest. It isn’t just about vaccine mandates and other COVID restrictions; organizers have said they want to oust Trudeau’s Liberal government and be part of forming a new one, he said.

“In many ways, the friendly face protesters are acting as the foot soldiers of the organizers,” Kempa said. “We are seeing a huge amount of misinformation. People who are legitimately angry are being manipulated by the protest leadership.”

Many Canadians have been outraged over the crude behavior of some demonstrators. Some urinated on the National War Memorial and danced on the Tomb of the Unknown Soldier, while others carried signs and flags with swastikas and used the statue of Canadian hero Terry Fox to display an anti-vaccine statement, sparking widespread condemnation.

The images of protests across Canada have ignited copycats elsewhere.

In Paris, police prevented a threatened blockade of the French capital on Saturday. But a few dozen vehicles were able to disrupt traffic on the famed Champs-Elysees, prompting police to fire tear gas to disperse the crowd.

“The convoys are for the restoring of our liberties,” said Pierre-Louis Garnier, a 64-year-old who attended a protest in Paris on Friday to welcome an anticipated convoy that never materialized.

In the Netherlands, dozens of trucks and other vehicles, some waving Canadian flags, have descended on The Hague, the historic Dutch parliamentary complex.

“We are living now in police state,” said Hans Evenstain, a 76-year-old protester said Sunday. “That’s not a good life anymore. We want to move freely and that’s why we are here for us and for our children and our grandchildren.”

In Belgium, federal police were urging people to avoid Brussels on Monday, when a convoy is expected to gather in the country’s capital, and the headquarters of the 27-nation European Union.

In the New Zealand capital of Wellington, authorities have turned to blasting Barry Manilow songs and the 90s dance hit “Macarena” on loop to break up a convoy of protesters encamped outside Parliament this week.

In Windsor, where protesters had blocked the entrance to the Ambassador Bridge that is a crucial conduit for the auto industry in both the US and Canada, police moved to end the demonstration Sunday, arresting about a dozen protesters and beginning tow vehicles.

Before Sunday’s crackdown, the shutdown often had the feel of a block party.

Protesters milled about, carrying Canadian flags affixed to the ends of hockey sticks while music blared and food was handed out. They put up signs bearing slogans such as “Freedom Is Essential,” “Say No To Mandatory Vaccines” and “End Mandates.”

Troy Holman, a 32-year-old Windsor resident who has been at the protest every day since its start on Monday, said he believes the government overreached with its COVID-19 restrictions, which negatively impacted his wife’s small business.

“If we weren’t doing something such as this, no one would pay attention to us,” he said Saturday. “Unfortunately, we have to be here, because this is what’s going to get the attention of the government.”

Shaffrey reported from Ottawa and Foody reported from Chicago. Associated Press reporters Rob Gillies in Toronto, Elaine Ganley in Paris, and Thomas Adamson in The Hague contributed to this story.