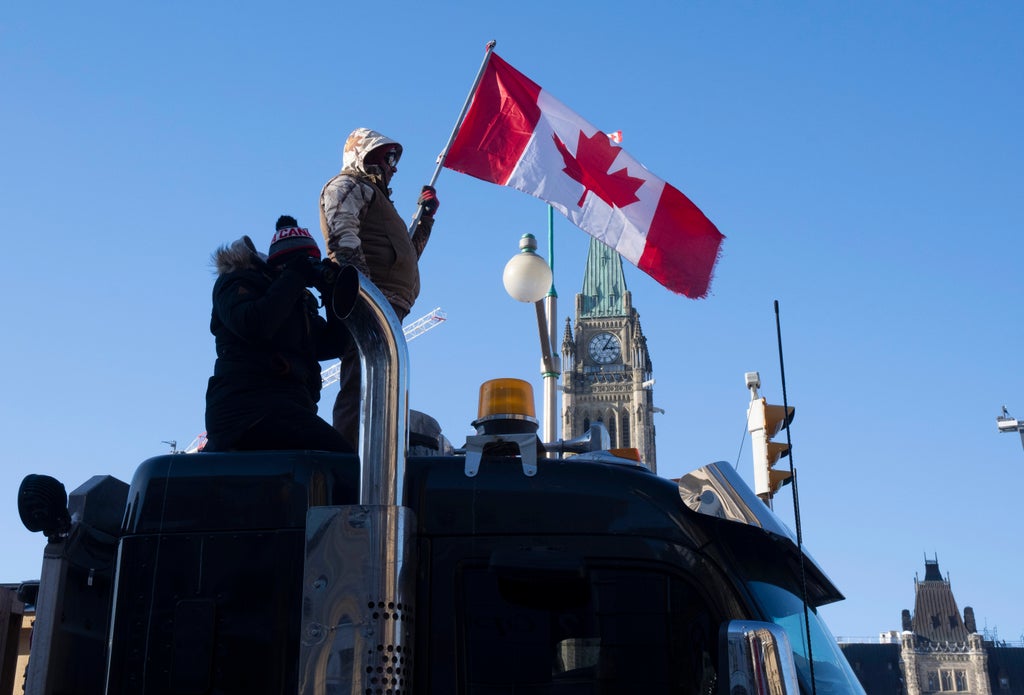 Protesters opposing vaccination mandates and COVID-19 restrictions staged rallies in cities across Canada on Saturday in a show of solidarity with a week-long rally in the national capital.

Officials in Ottawa and numerous provincial capitals worked to ensure that growing protests against public health measures related to the pandemic remained peaceful on Saturday.

By noon Saturday in Ottawa, thousands of protesters mingled near campfires on the snow-covered lawn facing Parliament Hill. Participants grilled hot dogs and handed out baked goods under tarps as two men on horseback rode through town, one carrying a flag in support of former US President Donald Trump.

The “freedom truck convoy” has drawn support from Trump and other Republicans.

In Toronto, several hundred protesters gathered on the south side of the Ontario legislature, chanting “liberté” in over-the-top reggae from loudspeakers and sports signs reading “Liberty.”

Nearby, a couple hundred health care workers and supporters marched from the University of Toronto to Hospital Row, just south of the legislature. They held banners that read, “free-tont” and “N95 masks for all.”

Toronto police set up barricades throughout the city center, preventing protesters in trucks or cars from approaching the provincial legislature, which is close to where five major hospitals are located.

Protesters also gathered in Quebec City, Fredericton and Winnipeg, with rallies also planned in Regina, Edmonton, Vancouver, Victoria and the US border crossing at Coutts, Alta.

Police forces in those cities say they have learned lessons from the Ottawa situation and have developed strategies designed to protect key infrastructure, such as vital traffic corridors and hospitals, as well as prevent potential violence.

Police in Winnipeg, Manitoba, filed charges against a 42-year-old Manitoba man who allegedly drove his vehicle into a group of “call for freedom” protesters gathered in that city. They said the incident took place on Friday night and resulted in three men being treated at the scene for minor injuries, while a fourth man was taken to hospital and released. The defendant faces multiple charges including assault with a weapon and dangerous operation of a conveyance.

“He wasn’t really for or against any of the general views,” said Winnipeg Police Service spokesman Const. Rob Carver.

Back in Ottawa, attorney Paul Champ filed a class action lawsuit on behalf of thousands of residents seeking millions of dollars in damages and an injunction against truckers not to honk their horns at all hours. The judge said he wants to give all parties in the lawsuit time to submit all documents to him, adding that he plans to make a decision on the cuckolding by Monday afternoon.

Many Canadians have been outraged by the rude behavior. Some protesters set off fireworks on the grounds of the National War Memorial on Friday night. Several carried signs and swastika flags last weekend and compared vaccine mandates to fascism.

Protesters have said they will not leave until all COVID-19 mandates and restrictions are lifted. They are also calling for the removal of the Trudeau government, although he is responsible for some of the measures, most of which were implemented by provincial governments.