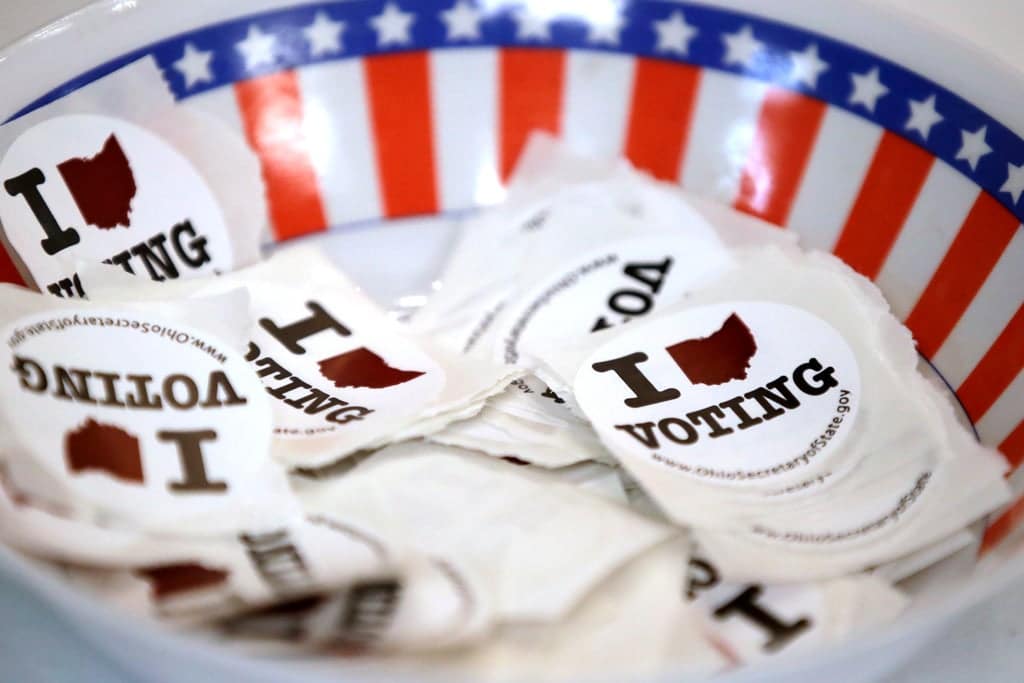 After months of buildup, Ohio’s primary in May was supposed to usher in a busier phase of the political season, when voters would begin lining up behind party winners in fall races for control of Congress, governor’s seats and key election offices across the United States.

Instead, the campaign season in Ohio has drifted into something close to a state of suspended animation.

A series of court rulings invalidating Republican-drawn redistricting maps is threatening to delay the May 3 primary by a month or more. There’s even a chance the election could be split onto two dates, with one focusing on statewide races and the other on the Statehouse and congressional contests tied up in the mapmaking fight.

A three-judge panel of the 6th US Circuit Court of Appeals will convene Friday to hear arguments on whether to move forward with the primary. If the primary does end up delayed, candidates competing for governor, US Senate and other statewide offices may have to shift their strategies for fundraising, advertising and voter outreach just as they thought they were nearing the end of the primary campaign.

“Running a campaign is like running a marathon,” said Ohio Republican consultant Ryan Stubenrauch. “They thought the finish line was May 3. It’s like halfway through they say, ‘We’re not going to run 26 miles. We’re going to run 50 miles instead.’ It’s a pretty big adjustment.”

The political and legal squabbling is a result of the once-per-decade redistricting process that all states must undertake to reflect population changes recorded in the census. Most states have finalized their political maps, and Ohio’s redistricting process was intended to be completed last fall. But in ruling after ruling, the Ohio Supreme Court has found that maps by the GOP-dominated Ohio Redistricting Commission were unconstitutionally drawn to unduly favor Republicans.

Ohio’s primary date gave the state one of the earliest voting contests in this year’s midterm elections. A change would let other states, including Pennsylvania and Georgia, take the lead in showing the types of candidates voters in both parties choose to advance to the general election in November.

Ohio’s contest to replace retiring US Sen. Rob Portman, a Republican, is seen as a test of former President Donald Trump’s clout in reshaping the party.

The commission has enlisted two new unanimously chosen mapmakers to help break the logjam as it faces a Monday deadline to fix the legislative maps. The state awaits another high court ruling on the fate of its congressional districts after the commission’s second attempt at a constitutional map was again challenged as partisan.

A delay isn’t inevitable. On Thursday, the Ohio Supreme Court denied a request from state Democrats to delay the primary to June 28.

Other people, including at least one Republican candidate, have suggested pushing the date as far out as August.

Behind the scenes, campaigns and party leaders are juggling the sometimes-competing interests of the candidates. Front-runners generally want the primary to happen while they’re in the lead; underdogs tend to want more time to make their case to voters.

That push-pull may have played a role in the Legislature’s defiant refusal to move the primary date, as only it — or a court — can do, leaving the state elections chief to order continual adjustments to primary preparations required under the law.

Former US Rep. Jim Renacci, one of two primary challengers trailing Republican Gov. Mike DeWine in polls, has come out in favor of delaying the primary for months.

“Having one primary in August will give the court time to sort through the redistricting mess, military ballots can go out on time, and taxpayers won’t have to pay the extra $20 million or $30 million for primaries in both May and August,” Renacci said in a statement: “I am usually opposed to moving primaries, but this involves taxpayer money, and the only people benefiting from two primaries are incumbents who want to get the election over with, and burden Ohio taxpayers with the cost.”

In the contentious GOP primary for the US Senate, some of the wealthier candidates funding their own campaigns would seem to have an advantage over the candidates who rely on traditional fundraising if the primary were to be moved back.

State and federal campaign finance laws limit the amount an individual donor can contribute during each election cycle. The primary is one such cycle, the general election another. So financially well-off donors often have given the maximum allowable contribution to their favored candidate by this point in the primary cycle, Stubenrauch said, with the idea of ​​giving again on May 4.

Millionaire candidates, like some in the Senate race, can put as much of their own money into federal races as they want.

“Everything from booking millions of dollars in television to dropping direct mail to booking event venues could be instantly impacted by a shifting primary date, and the campaigns that have the resources that beget versatility and flexibility naturally will have an advantage in the duration of the contest ,” said Chris Maloney, a Dolan strategist.

A delay would give Trump, who has remained on the sidelines of the race despite being desperately courted by a handful of candidates, additional time to make a decision that could fundamentally alter the race.

“It is a huge factor,” David McIntosh, president of the Club for Growth, which is backing Mandel with significant spending, said of Trump’s endorsement.

For now, several aides said the campaigns are operating as though the primary will be held on May 3 — with those trailing hoping they have enough time to catch up to the front-runners whether the race happens in six weeks or five months or six months from now.

Morgan Harper, who is challenging US Rep. Tim Ryan for the Democratic nomination for US Senate, called the Legislature’s unwillingness to reschedule the primary “deeply irresponsible.” She said the state should not hold split primaries, which, by some estimates, would cost taxpayers an additional $20 million.

“If one set of primaries moves, they should all move,” she said in a statement. “It would be confusing to the voters and wasteful for taxpayers otherwise.”

Harper said “the lack of a firm date has confused voters and volunteers, and it has implications for every aspect of the campaign from field to fundraising.”