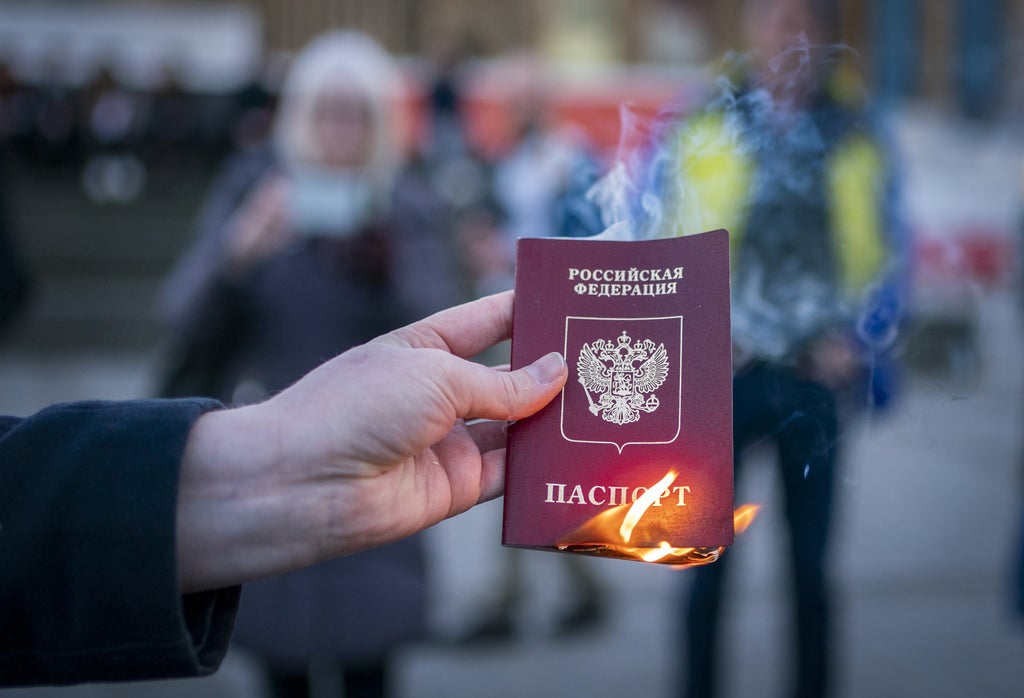 A campaigner protesting against Vladimir Putin’s invasion has set fire to her Russian passport during a vigil held for the people of Ukraine.

Anna Jakubova, 26, from Moscow, defiantly lit the red booklet with a lighter in front of hundreds of people gathered near The Mound in Edinburgh on Tuesday evening.

Demonstrations have been taking place daily in the Scottish capital and across the country since Mr Putin launched a full-scale military invasion in his neighboring country on Thursday, bringing together tens of thousands of people who stand in solidarity with Ukraine.

Speaking to PA news agency reporters at the Standing In Solidarity With Ukraine vigil, Ms Jakubova, who traveled from Dundee for the event, said: “I burnt my passport as a gesture against the Russian government and to show that even Russian citizens are turning against this country and the horrific things that it’s doing.

“I am hoping to attract attention to the plight of the Ukrainians and give them a voice to amplify their suffering and their struggles.”

Ms Jakubova, who is a graduate from the University of Edinburgh, said while she condemns Russians who voted for Mr Putin’s government, there are citizens from her country demonstrating against the invasion.

She said: “There are quite a few Russians protesting in Moscow and they are risking their livelihoods and their careers and their families.

“I feel I am representing a significant proportion of Russians, even if it’s not the majority.”

Ms Jakubova added: “I don’t want to be a citizen of a country that committed war crimes that are so horrible it killed children and innocent people who are just defending their own country.

“I feel very sad. I feel shame that it is a country that is associated with me that has done this. I feel like nothing I can do is enough.”

The city’s central Freedom Square was hit by major explosions.

Casualties mounted and reports emerged that more than 70 Ukrainian soldiers were killed after Russian artillery recently hit a military base in Okhtyrka, a city between Kharkiv and Kyiv, the capital.

Also attending the vigil was Dmitry Koshkin, 41, originally from Kharkiv and now living in Edinburgh.

He has relatives who are hiding in a bomb shelter in his home city, including his cousin, his cousin’s wife and their nine-year-old son.

“My cousin actually celebrated his birthday in these four concrete walls,” he said.

“It’s smelly and crammed with people with lots of children and people with dogs and cats.

“So, for his birthday present to himself, he actually ran back home to take a hot bath.

“That was his birthday treat.”

“It also feels wrong to sit in my warm Edinburgh flat while they are doing that.

“I try to come to these gatherings as much as I can just to do something because it tears me apart that they are over there, struggling, fighting, helping each other, and I am 5,000 miles away, I cannot do much except for message on WhatsApp.”