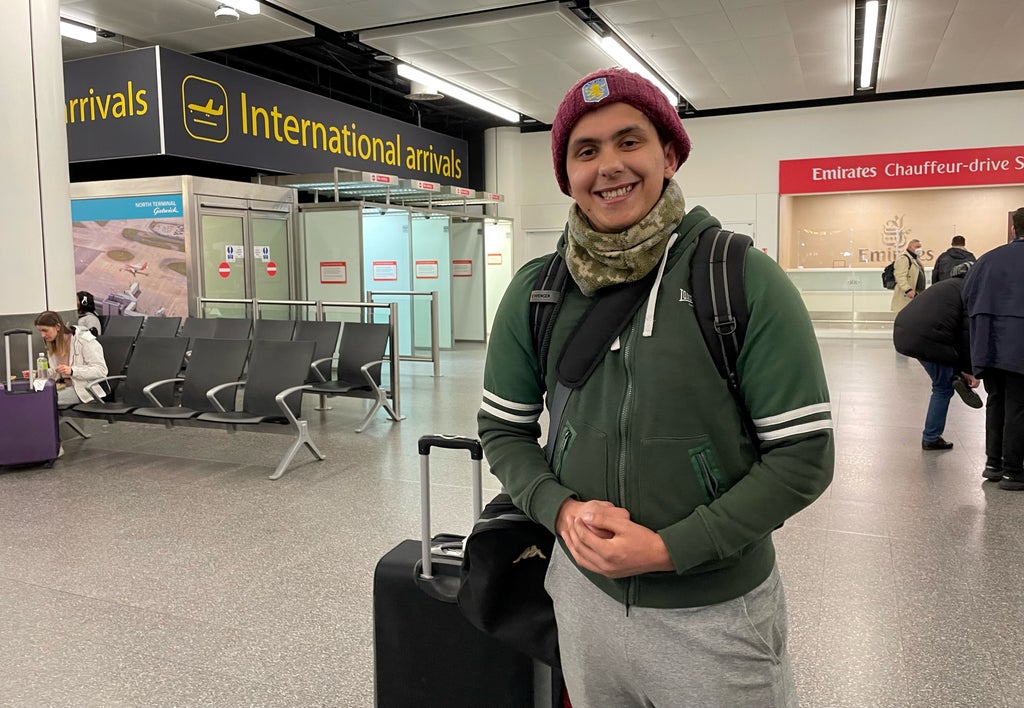 The call for Britons to flee Ukraine as the threat of Russian invasion looms caused “quite a panic” and a rush to return home, according to a student who landed in the UK on one of the first commercial flights out of Kyiv since the warning.

Passengers arrived at Gatwick Airport south of London, on a direct flight from the Ukrainian capital shortly after noon on Saturday, just hours after the Foreign Office warned UK nationals in the country, thought to number in the low thousands, to “leave now while commercial means are still available”.

Those returning suggested there were mixed signals about the level of concern in the country about the threat of war.

Haider Ali spoke to the PA news agency after landing at Gatwick Airport from Kyiv on Saturday.

He said: “I’d been in two minds about coming back because of the advice coming out by the British Embassy, ​​about the amber alert, red alert.

“A lot of people, a lot of students were waiting for the red alert, and it happened yesterday.

“Once that happened, everybody booked their tickets and left as soon as possible.”

The 21-year-old from Birmingham said his university, the Dnipro Medical Institute in Dnipro, a city in central Ukraine, had advised students to “get out as soon as you can”.

He said around half the students at the university are British.

The UK and other Nato countries have urged their citizens to leave as fears grow that Russian President Vladimir Putin could order an invasion in the coming days.

Mr Ali said: “I think the main thing that people were getting worried about as well is, because it’s along the Dnieper River, a lot of the people were saying, if Putin wants to suffocate Kyiv, push his warships along that path as well .”

The student said he had paid £210 for his one-way flight ticket and thought prices would get much more expensive over the next three days as more people rush out of the country.

He said he was hoping to return to Ukraine by June to continue his studies.

Mr Ali said Ukrainians’ opinions were split on the likelihood of a Russian incursion, but that the perception that Western media were blowing the crisis out of proportion was changing.

He said: “The Ukrainians are generally very laissez-faire as in terms of people, but the last couple of days they’ve started to get worried.

“And when that happens, alarm bells should be ringing.”

Another British citizen arriving at Gatwick on the same plane said Ukrainians did not seem worried.

Paul Meakin, 51, from Poole in Dorset, his Ukrainian-British wife Svetlana, 36, and their daughter, who had spent a week in Ukraine to attend a funeral, said most passengers on their flight had been Ukrainian, not British.

Asked about people’s attitudes there, the IT company chief said: “You wouldn’t even know. They don’t care, that’s what came across.”

That sentiment was echoed by Ukrainian Pasha Honcharuk, 24, from Kyiv, who said he was “not too worried” and that he would have stayed home if it were not for work in the UK.

He said: “All news channels tell that there will be war but I don’t think so.”

But a Ukrainian business analyst, who did not want to be named, told PA that “of course everybody’s worried” about the threat of war.

But she said this had not influenced her pre-existing decision to move to London from Kyiv for work.