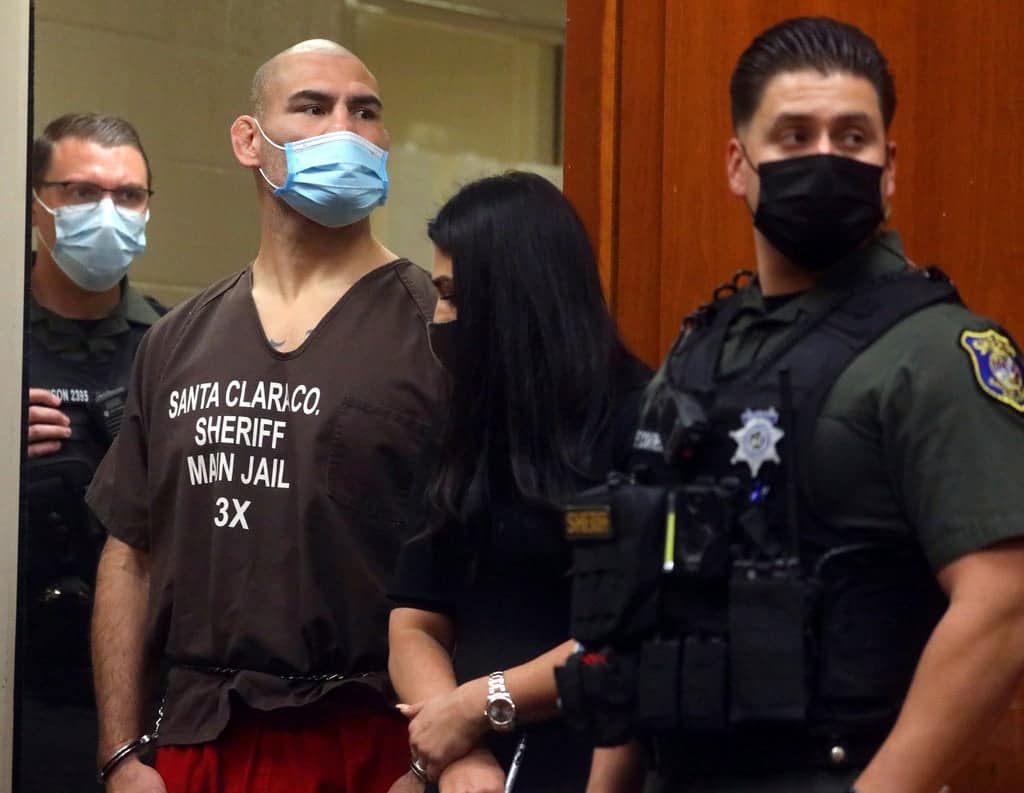 The man accused of sexually abusing a four-year-old child related to UFC heavyweight champion Cain Velasquez is claiming he will not get a fair trial because of public support for the sports star who is now behind bars charged with his attempted murder.

An attorney for Harry Goularte Jr, 43, said that he has been forced into hiding while he awaits his trial on one count of a lewd and lascivious act with a child under the age of 14.

Steve DeFilippis told MercuryNews that public “uproar” over the case is threatening Mr Goularte’s chances of a fair trial and means that “there’s clearly a security issue”.

“Mr Goularte very strongly denies the allegations in this case, and is looking forward to the ability to disprove those charges,” he said.

“But I just don’t understand how Mr Goularte is going to get a fair trial in this county with this kind of uproar and the upheaval this case has had.”

He said that Mr Velasquez, 39, “made an effort to be the judge, jury and executioner on a case”.

“That’s not right. I can understand why he did it, but I certainly can’t support what he did,” he said.

“Here, I’m going to be fighting against a public uproar on a case fueled by the fact that an MMA hotshot took some action that he should never have done.”

The attorney claimed that the uproar and security concerns are the reason behind the 43-year-old’s decision not to attend his latest court hearing in person on Wednesday, as a crowd of around 50 people gathered outside the South County courthouse in protest over the suspect .

See also  Cryptocurrencies: The interconnection of bitcoin with the Stock Exchanges increases the risks of contagion | Economy

Mr Goularte appeared at the hearing remotely as he is accused of molesting the four-year-old child at a home daycare in San Martin, California.

The suspect has access to daycare because it is operated by his mother.

He was arrested in February after the child, who is a close family member of Velasquez, confided in her parents about the alleged abuse.

Mr Goularte was granted supervised release that month and is free while he awaits trial.

The incident unfolded when Mr Velasquez, 39, allegedly followed Mr Goularte’s parents in their pickup truck on their way to collect their son.

When Mr Goularte got in his parents’ vehicle, Mr Velasquez allegedly fired at the car.

As the car drove off, Mr Velasquez allegedly gave chase, ramming the vehicle with his own pickup truck and shooting several more times.

Mr Goularte’s father suffered injuries to his arm and torso in the 11-mile high-speed chase, according to prosecutors.

The former professional fighter remains behind bars after a judge denied his request to be released on bail in a court appearance on Tuesday.

Outside the courtroom that day, people gathered outside with “#FreeCain” banners in a show of support for Mr Velasquez.

He also spoke out publicly about the case for the first time that day, thanking people for their support.

“To everyone that has expressed your support, my family and I will never be able to thank you enough,” he said in a statement shared on his Twitter page.

“From the bottom of our hearts and the depths of our souls, we are forever grateful for your love.”